Diary of the displaced

In the Indian version of suburbanisation, the poor are being forced out of the cities, compelled to pay the price for the creation of the global city. Can we not envisage an inclusive city that caters to the needs of all its citizens, asks Kalpana Sharma.
07 June 2008 -

When a natural disaster, like an earthquake or a tsunami, destroys your home and leaves you destitute, you have no one to blame. The trauma and grief are great but most people move on. And there is help available. What happens when your home is flattened by bulldozers because a city decides that you should not live there any more, that the land you and perhaps your parents have lived on is now required for a 'public purpose'? Which 'public' and what 'purpose'? You cannot demand an explanation.

In such an eventuality, the trauma and grief are as great as when hit by a natural disaster, but the sense of hopelessness is greater. For, it comes after years of deception, false hopes and broken promises. There is little help available. The choice has been made for you. Move to a new site, government approved, or perish.

The problem is that even when you do move, often you perish. For, the new locations are distant, deprive you of community, of livelihood, or security. A new, well-researched book, Swept off the Map: Surviving Eviction and Resettlement in Delhi by Kalyani Menon-Sen and Gautam Bhan (published by Yoda Press) brings many of these facts out in a credible and forceful way. The book traces families compelled to move from the banks of the Yamuna from an area called Yamuna Pushta in 2004 to the Bawana Resettlement Colony on the outskirts of Delhi. 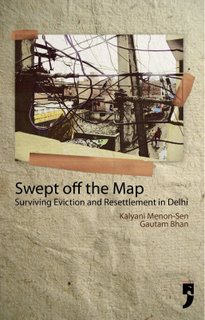 This was done because the Ministry of Tourism wanted to make the area into a tourist attraction. And the slums there, where an estimated 35,000 families had lived for over three decades, were an eyesore. So they had to be moved. Despite court cases and interventions by activists, the bulldozers moved in and flattened the colony. Only 16,000 families could prove their credentials to the Delhi Development Authority (DDA). They were allotted plots in several areas outside Delhi, including Bawana.

The study follows 2577 households, and records the impact of the move on livelihood, quality of life and environment. The research project was novel because it trained community workers to conduct the study alongside trained researchers. And it developed the research through what the researchers call a 'feminist lens'. Explaining this, they write: "Methodologically, feminist research differs from traditional research because it actively seeks to address and account for the power imbalances between women and men, and between researcher and subject. It is also a strategy for challenging the social inequality built into mainstream research methods. Most significantly, it recognises and builds on the standpoints and experiences of women in particular and other marginalised groups in general."

In other words, you don't study women as subjects but study everything from the perspective of women. The results of applying such a lens to research are very different as is evident from this particular study.

What emerges is a mirror image of what is happening in many other Indian cities striving to be 'global'. Thus, flyovers, hotels, airports, sports facilities, shopping malls are all deemed essential needs for cities while affordable housing for the poor becomes a low priority and the only land that can be spared is usually in distant suburbs or even outside the city.

The Delhi story is particularly disturbing because the displaced communities are not even offered security of tenure in their new location. They are asked to pack up and leave for a place many miles away from the place where they have lived for years. After going through a complicated and fraught process of proving eligibility, which includes bribing officials, the family finds itself on a small plot of land, no more than 18 sq metres and some as small as 12.5 sq metres. The facilities for water, sanitation and electricity are little better than what they left behind. But what is worse is that the plots are given on a five-year lease and there is no guarantee that the plot holders can continue to live there after that.

The research project was novel because it trained community workers to conduct the study alongside trained researchers.

•  New rules for seizing land
•  Less than half a voice

As a result, the people who are forcibly moved see no point in making an investment in improving conditions and neither do the authorities. It is not entirely clear why the Delhi Development Authority (DDA) chose not to give ownership to those relocated in Bawana while resettlement colonies in the past always guaranteed it. Why would anyone, rich or poor, be willing to relocate without a guarantee that they had the right to stay in the new location? Yet, the poor move because they are not given an option.

Women in particular face the brunt of being forced to move. In mixed income localities, poor women can always find work as household help, for instance. Even if they earn modest amounts, they can work in several households and still have time to look after their own homes. In many places, the domestic help and the employer have a mutually supportive relationship that extends beyond monetary compensation. But when poor communities are pushed out of such areas into localities of other poor and displaced people, they have no such avenue of finding domestic work. The same plight affects men doing casual work.

Many women as well as men are forced to make the tough choice of spending a considerable amount of their meagre income on commuting long distances just to hold on to their jobs. The book records testimonies of women who spend up to four hours commuting up to 50 km each day. For some it means waking up at 4 a.m., doing the household chores, catching a bus that takes two hours, working all day in Delhi and catching a bus back in time to continue with household chores at home.

In industrialised countries, suburbanisation has meant the rich move out of cities and commute to work. They can absorb the additional expenditure. In our country, the poor are being forced to do this. Why should the poor be compelled to pay the price for the creation of the 'global' city? Can we not envisage an 'inclusive' city that caters to the needs of all its citizens? At the moment, it would seem that the planners of cities like Delhi see these as mutually exclusive.