Scientists examining satellite images of the Sundarbans mangroves find that frequent cyclone-induced damage slows the recovery of mangroves and changes the forest composition in comparison to other regions that didn't witness many cyclones. Priyanka Shankar reports.

Satellite images of the Sundarbans mangroves along the Bay of Bengal, that capture changes before and after tropical cyclones, are helping make sense of mangrove damage from extreme weather events and create records of the impacts of cyclones on these ecosystems. Recent studies flag the importance of continuously monitoring these ecosystems that are at risk due to climate change, coupled with the legacy of historical shoreline changes from human activities.

The Sundarbans mangrove ecosystem in India, for example, is classified as endangered in the IUCN’s Red List of Ecosystems framework. Historical threats came from clearing mangroves dating back to the 1800s and declining fish populations. Ongoing threats like climate change and reduced freshwater supply are heaping pressure on this ecosystem. New research shows that Sundarbans mangroves are beginning to erode faster under the combined assault. 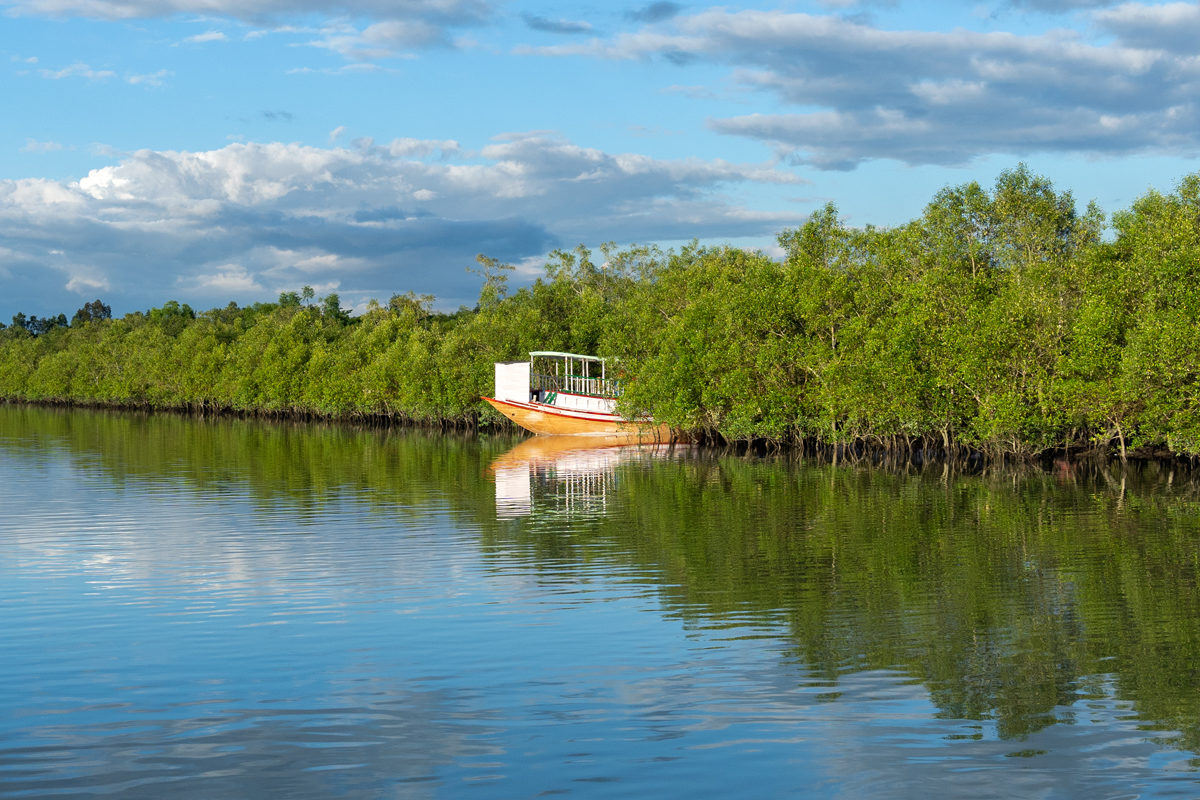 The Sundarbans mangrove ecosystem is classified as ‘endangered’ in the
IUCN’s Red List of Ecosystems framework. Photo by Kartik Chandramouli/Mongabay.

Using cyclone Amphan, that hit India and Bangladesh coasts in May 2020, as their case study, a team of scientists at the University of Delaware in the United States and the University of Goettingen, Germany developed a rapid, remote sensing-based approach to gauge flooding of coastal lands and mangrove damage after the cyclone in near real-time. They used multiple satellite datasets to obtain information remotely. "Remote sensing can enable you to do time travelling. So, you can go back in time, 20 to 30 years and do it for every season and see if the changes in mangroves or vegetation are part of the natural variability or due to human activities," said environmental geographer Pinki Mondal at the University of Delaware.

Mondal and colleagues tapped into satellite data derived from optical (Copernicus Sentinel-2 satellite mission), radar (Copernicus Sentinel-1 satellite mission), and LiDAR (Global Ecosystem Dynamics Investigation) platforms. The raw satellite data was turned into a normalised difference vegetation index (NDVI), an indicator of plant health. The researchers tapped into a relatively cloud-free time window between January and March for the years 2020 (pre-Amphan) and 2021 (post-Amphan) for the analysis.

Their analysis showed that as much as 73.5 per cent of the entire Sundarban mangroves witnessed a decline in the NDVI values (plant health) after Amphan – likely due to annual variability and not cyclone-related damage. However, about 3.45 sq. km. of the Sundarban mangrove forest (roughly 0.05 percent) had a considerably lower NDVI value almost a year after Amphan, which likely reflects the damage from the cyclone. Shorter mangrove stands were more widely affected, whereas the range of extreme damage decreased for taller mangrove trees. This difference in mangrove damage is likely because Amphan’s eye and track were closer to the western Sundarbans with shorter trees than the eastern side with relatively taller trees.

"The finding that shorter mangroves were more widely affected than taller ones is significant because close to 40 percent of the Sundarbans supports short-statured mangroves," Mondal added. She says that the southern and western regions of the Sundarbans in India and Bangladesh showed the most damage to the mangrove cover following the cyclone. These most affected regions translate into the eastern part of Indian Sundarbans. 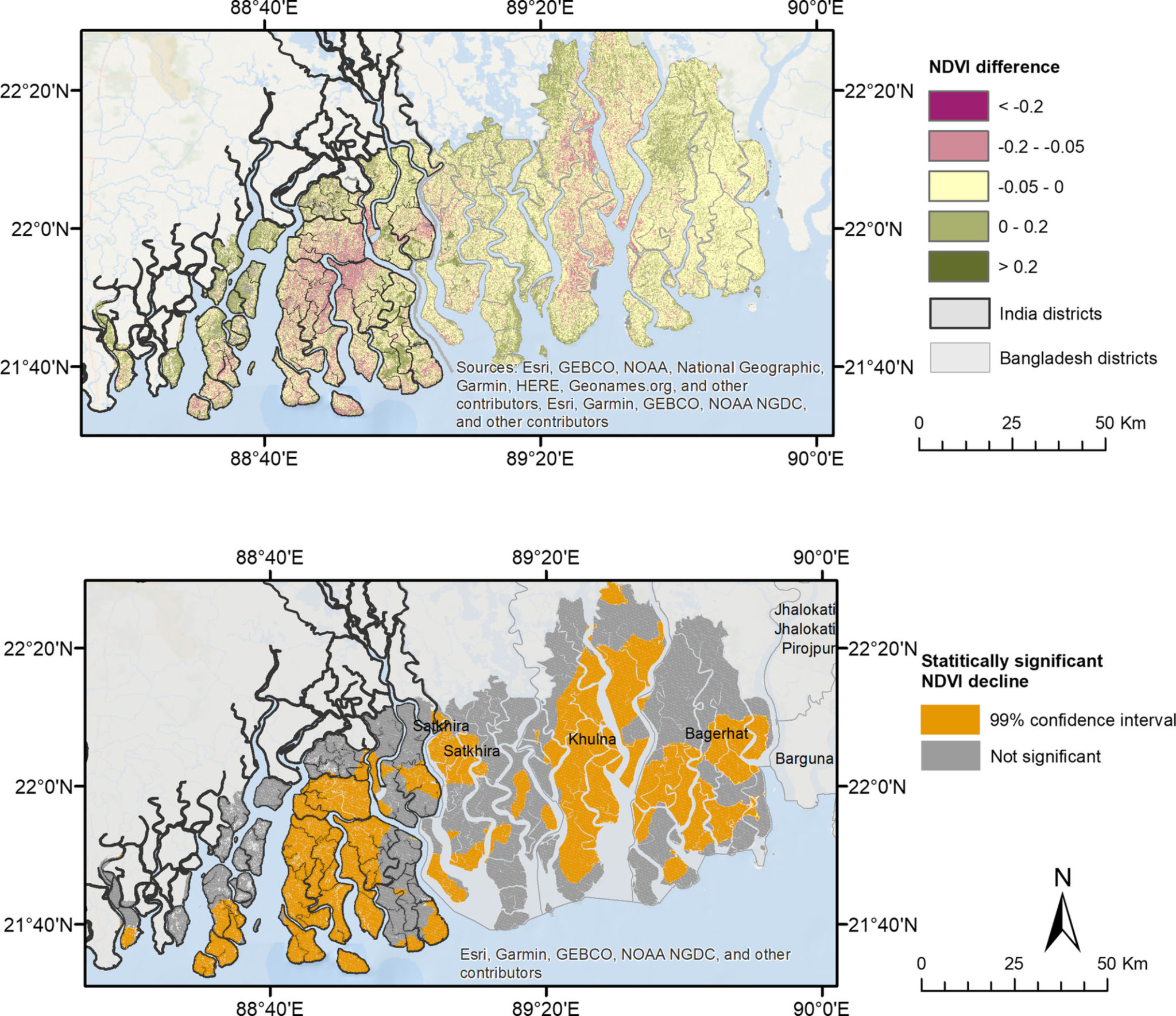 The southern and western regions of the Sundarbans in India and Bangladesh
showed the most damage to the mangrove cover following the cyclone. Map by Mondal et al.

The mangrove damage areas uncovered by Mondal et al. following Amphan coincided with the regions identified as damage hotspots in another study by scientists at the National University of Singapore (NUS), published in March 2022. "Using satellite data and geospatial analysis, we can generate records of the impact of cyclones. For example, Sentinel data is helpful for cloudy conditions during a cyclone as the satellite data can give ground information through the clouds. We use such data before and after an event to estimate change (or impact). As for long-term monitoring, satellite data is useful because you can get information as frequently as daily to monitor the recovery or degradation of the site post an event," explained Radhika Bhargava, a Ph.D. student and study co-author.

The researchers of this study looked at three major cyclones between 2019 and 2022 (cyclone Fani in May 2019, cyclone Bulbul in November 2019, cyclone Amphan in May 2020) to check how past shoreline changes shape the impact of cyclones on mangrove species. They found that cyclone Amphan caused the most damage out of three recent cyclones, with the most mangrove loss (18.8 percent) along shorelines that were eroding over the past 35 years.

"Mangroves are known to be resilient to the impact of cyclones to protect the shoreline from getting eroded. But that was true when so much pressure from human activities wasn’t there. But now, under so much stress, mangrove shorelines are beginning to behave differently," said Bhargava. "So the legacy of human-caused pressures on shorelines affect their future vulnerability."

Hotspot areas of damage and shoreline loss in the Sundarbans as a cumulative impact of Cyclone Amphan, Bulbul, and Fani. Map by Bhargava et al.

Mondal said that the ultimate long-term recovery of ecosystems depends a lot on the cyclone tracks. "If a particular region is witnessing frequent cyclone damage, the recovery would be slow, and the forest composition would be different compared to other regions that didn’t witness many cyclones." According to Mondal's study, the northern and eastern parts of Bangladesh Sundarbans seem to have escaped most of the damage from Amphan because the cyclone track stayed away from this subregion. "It could be a legacy effect from past cyclones that affected more coastal regions (especially south or east in the Indian Sundarbans). Or the different types of mangrove species in the Bangladesh Sundarbans and resulting differences in mangrove composition and their capability to withstand strong wind damage," Mondal reckoned.

Mondal's research also looked at Amphan-driven flooding in India and Bangladesh using satellite-based remote sensing. It revealed that at least 6,821 sq. km of land (not considering inundated forests) across the 39 study districts in India (West Bengal and Odisha) and Bangladesh were underwater even ten days after the cyclone. "Such rapid assessment, when complemented with detailed information on species and vegetation composition, can inform appropriate restoration efforts in severely impacted regions and help decision-makers efficiently manage resources for recovery and aid relief," the authors wrote in the paper.

S K Dash, who specialises in remote sensing applications to coastal studies at the Ministry of Earth Science's National Centre for Coastal Research (NCCR), says one big hurdle to keeping an eye on changes along India’s coasts is the lack of an open database that logs baseline data on the erosion and the changes to the structure of the coastline. He was not associated with two studies. "The digital Shoreline Assessment System designed by NCCR has data from 1990 to 2018 that tells you all about India’s coastline from the lens of erosion. It packs in satellite data, modelling and in-situ observation to tell you how specific changes may affect the coastlines in the future," he said.

About 40 per cent of the Sundarbans support short-statured mangroves which were widely affected by cyclone Amphan. Photo by Nafis Ullah/Wikimedia Commons.

"Among other things, it tells you when a certain portion of the coast is affected by erosion and how cyclones impact coastlines in the short-term and long-term. But it is only available to administrators. We are now planning to open up the database to serve communities interested in this information," Dash elaborated. "If a particular structure is coming up along the shoreline, then it helps one gather information about potential changes in the area that could be triggered due to the development,"  he said.

In addition, the NCCR is also expanding its critical habitat information system that provides information such as carbon sequestration in coastal habitats such as coral reefs, mangroves and seagrasses. "The system would benefit NGOs who can embark on restoration projects with proper planning," he said.