Fishermen oppose a new notification by the Environment Ministry that would open up the coast to industrial development. Their state governments agree, but the Centre and the World Bank are pushing ahead nonetheless. Kanchi Kohli reports.
24 November 2008 -

On 4 November 2008, fishworkers from Andhra Pradesh, Tamilnadu, Kerala, Karnataka, Maharashtra, Gujarat, Orissa and West Bengal reached New Delhi. For the next four days they addressed passers-by, met MPs, and addressed civil society and the media. They traveled long distances to the national capital to voice their displeasure at the corridors of power here, which are far removed from coastal realities and continue to propose policy and legal measures that impact the lives and livelihoods of fishing communities.

The fishworkers' agitation and advocacy efforts in Delhi included a list of demands - an appeal against the privatisation of marine and inland water bodies and the coastal zone on the one hand, and a demand for proactive enactment of legislation to protect traditional fisher peoples' preferential access as well as their customary rights over coastal and marine spaces. They also sought a debt waiver for fisherfolk along with farmers, and an end to the import of fish. And foremost, they demanded the withdrawal of the Coastal Management Zone (CMZ) notification, proposed by the Ministry of Environment and Forests (MoEF). The message was clear in the voice of leaders like T Peter from Kerala. He said, "we have not come to Delhi for sight-seeing, we have come to tell the government that policies like CMZ should be thrown into the sea."

A draft CMZ notification was issued amidst stiff controversy by the MoEF on 1 May 2008, seeking public comments. It was reissued in July 2008, with the MoEF providing more time for one and all to send in their feedback. But a controversial history precedes these notifications. The current round of proposed CMZ notifications seek to replace the previous avatar - the Coastal Regulation Zone (CRZ) notification, 1991. The formal process to revamp the old CRZ notification began in 2005 when the MoEF constituted a committee set up under the chairmanship of Dr. M S Swaminathan.

Today's CMZ finds itself based fairly substantially on the principles prescribed in the Swaminathan committee's recommendations. The report of the committee and subsequent internal drafts of the MoEF were based almost entirely on discussions with industry representatives and state governments. Ironically, even the Coastal Zone Management Authorities (CZMAs) set up at national and state level for the implementation of the CRZ notification were not spoken to. A comprehensive detailing of this process is available in a publication: Sridhar, A., M. Menon, S. Rodriguez and S., Shenoy. 2008. Coastal Management Zone Notification '08 -The Last Nail in the Coffin. ATREE, Bangalore. pp 81 (available for download on http://www.atree.org/).

Certainly, the existing CRZ notification needed to be changed; it has not managed to protect the coast from industrial and commercial takeover. The notification has been amended 19 times in the 17 years of its existence, each time diluting its core intent, and opening up the coast to activities harming human, coastal and marine life. It is not a surprise then that over 50 per cent of approved SEZs which are multi-product and port-dependant are to be located on the coast. The notification was also highly ignored, its restrictive clauses disregarded and the CRZ provisions blatantly violated.

The report of the Swaminathan committee and subsequent internal drafts of the MoEF were based almost entirely on discussions with industry representatives and state governments.

•  A road through the laws
•  Regulation threatens fishermen

But the CMZ proposed now is not an effort to rectify these failures; insead it seeks to justify the irregularities. It would transform the existing regulatory (and restrictive) approach into a framework where coastal zones are 'managed'. Two critical modifications are noteworthy in the new law. First, it entirely does away with the 500-metre 'no development zone' from the high tide along the entire coast. In the earlier CRZ notification, this zone received special protection, as it constitutes the most ecologically fragile parts of the coast including estuaries, mangroves, turtle nesting habitats, rocky promontories, and sand dunes. Under the new CZM plan, these areas would be opened up to tourism, ports, nuclear installations, thermal power plants, sand mining and more.

Second, the new law proposes to change the parameter based on which coastal areas could be conserved. The CRZ used the high tide line, whereas the CMZ used a Set Back Line (SBL). The High Tide Line, despite its variability (between 200 and 500 metres) was something that all those living on the coast understood. SBL, on the other hand, will need the entry of 'scientific experts' to replace the traditional wisdom of the fishing communities and demarcate areas where different activities are permissible. The mechanism is likely to only serve the interest of those who are seeking to 'develop' infrastructure and other facilities along coastal lands lying vacant to exploit.

Even from a scientific perspective, the SBL as prescribed in the May 2008 notification is ridden with risk. As Sridhar et al (2008) describe in The Last Nail in the Coffin, "The setback is a concept for which the scientific methodology is not clarified and instead, only some basic parameters are listed. Though this line is to be marked based on the vulnerability to both natural and man made hazards, only 4 parameters (elevation, geomorphology, sea level trends, and horizontal shoreline displacement) are to be considered for this, as against the 6 that were contained in the unofficial draft Coastal Zone Management Notification, 2007 and 7 which were contained in the Swaminathan Committee Report on the CRZ (elevation, geology, geomorphology, sea level trends, and horizontal shoreline displacement, tidal ranges and wave heights). 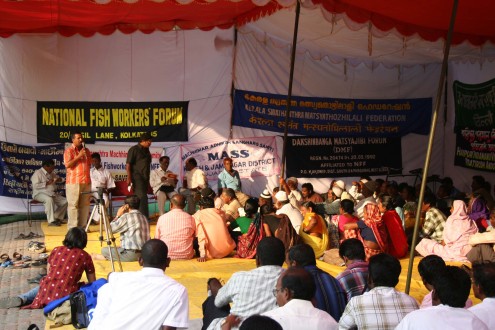 The protest meeting in Delhi.
(Photo by Manju Menon)

The fishing communities are livid, and demand a complete scrapping of the current notification. Representatives who traveled to protest in Delhi also had strong reasons for their opposition. They came from places where industrial development had already destroyed their livelihoods, or is threatening to do so. These included areas where some of India's largest projects are in operation or proposed, including Gorai SEZ (Maharashtra), Mundra SEZ (Gujarat), the proposed POSCO project (Orissa), Suryalanka Special Tourism Zone (Andhra Pradesh) and so on.

Will their voices be heard? Neither the Prime Minister's Office nor MoEF has moved to react to the protests so far. But as we await word on that, it is also interesting to look at what some state governments have been telling the MoEF, in response to the draft CMZ notification. A letter dated 27 September 2008 by M Karunanidhi, Chief Minister of Tamilnadu states, "... there is strong opposition amongst coastal communities, especially the fishermen that the Coastal Management Zone Notification, 2008 will endanger their livelihoods and put them to much hardships ... In the above circumstances I request you to please see that the issue of the said notification is deferred, until such time it is fully accepted by the coastal community, especially the fishermen"

Dr. E P Yeshodharan, Principal Secretary, Government of Kerala, raised some very critical points in a letter dated 29 August 2008. "In the draft coastal management zone notification there are regulations only with respect to infrastructure and habitations. Regulations regarding the economic development activities are not dealt with in the draft Coastal Management Zone notification. It is feared that uncontrolled developmental activities may invade the coastal zone. It is also feared that in course of time, the fishermen will lose their traditional rights on sea and sea coast, if appropriate provisions are not made in the regulations. Appropriate provisions may be made in the regulations." The letter also clearly seeks a No Development Zone along the coast, which the draft CMZ seeks to do away with.

The MoEF seems to have committed itself to the implementation of the CMZ notification even before the law is notified. A World Bank-supported Integrated Coastal Zone Management Project approved in February, 2007 is already under implementation. The World Bank's argument is that this would lead to better management of the coast, and take forward the Swaminathan committee's recommendations. The determination of the MoEF and the Bank's financial support for the as-yet-unratified law leaves coastal communities in despair. Says Prisca, a fisherwoman from Kerala, "there was a time our children were able to play in the sea. We could go anytime and come back anytime. That was the best time. The sea was ours."