CRZ: Why coastal communities are troubled by these three letters

Lack of clarity over legal requirements, shoddy implementation and selective approvals have made it extremely difficult for poorer communities to build or maintain their houses in coastal zones. Vinod Patgar describes the situation based on his experience in Karnataka.

The coastline of Uttara Kannada district in Karnataka is poised at a critical juncture. Both the government and the private sector are looking out for opportunities and have begun setting up resorts, ports, and industries signalling “new” opportunities. In this context, sustaining common use areas like beaches and creeks and access to the shore for everyday occupations is slowly becoming a challenge for many coastal communities. 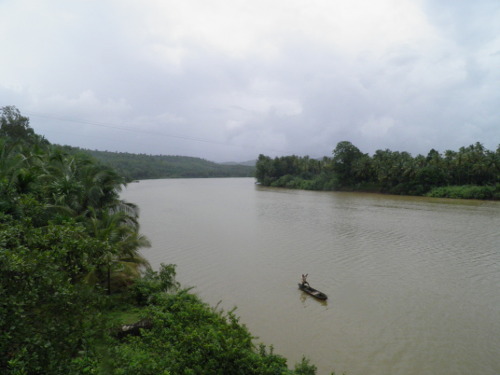 I often see community members complain about these recent developments and there are increasing disputes between fishermen and the new landowners of the coast. Very often these discussions end up with the government being blamed for not having any regulation to control this. But deeper observation reveals that the problem is that our government declares new pieces of legislation every now and then without necessarily realising its full implementation and without providing the knowledge about this law to local people. The Coastal Regulation Zone (CRZ) notification seems to be one such law.

The ‘Coastal Regulation Zone Notification, 2011 (earlier 1991) has been issued by the central Ministry of Environment, Forests and Climate Change (MoEFCC). It lays out regulatory procedures for activities to be carried out in different parts of the coast. The main objective of the 2011 notification is to protect the livelihoods of traditional fisherfolk communities, preserve coastal ecology and promote economic activity necessary for coastal regions.

It divides the coast into four zones and sets out procedures by which activities are entirely fully allowed, regulated or restricted. For those that can be conditionally approved, applications and proposals need to be approved by a State Coastal Zone Management Authority (SCZMA) and the MoEFCC. The implementation of the CRZ notification requires the preparation of a Coastal Zone Management Plan, showing a map of these zones. For more details on the zonation and process see Pocket Diary on Coastal Regulation Zone (CRZ) Notification.

Although the notification proclaims that its objective is to protect the livelihoods of traditional fisherfolk communities, it seems to be actually driving people away from the coast. Local people who might wish to construct or repair their small houses have to go through a very tedious process to get permissions. This involves getting paperwork cleared from a series of departments such as the Panchayat, a Treasurer in the Revenue department before seeking approval from the SCZMA.

Applicants have to travel long distances for basic information and lack of clarity on the documents required for processing applications make it a huge challenge. As a result, many locals have engaged in ‘distress sale’ to buyers at low rates.

Today, in the district, the tourism industry and government developmental projects occupy at least 18 percent of the coast that was once the home of traditional fisherfolk and coastal farmers. This has not only affected the poor families who have sold their lands at throwaway prices, but also large sections of the coastal communities who eventually lose access to the beachfront and the village commons.

Confusion over legal procedures and lack of awareness has worked in favour of the tourism and real estate sectors and denied the locals their right to stay here. Many who sold their land to these projects are now wondering how tourist resorts are able to build such huge structures while they had hardly been allowed to just repair their homes.

Fear of the law

A farmer from Kagal, Kumta tells me “Please find some buyers for me, I have two acres of land near the beach. I hear that under the CRZ law, all our lands will be acquired and we will be homeless then. So I will sell my land now for a negotiable price.” I am intrigued, and ask why this sudden worry and alarm about CRZ. 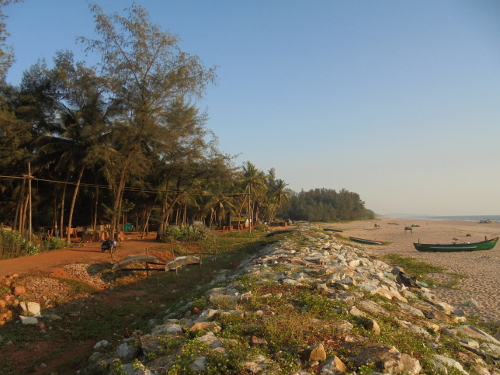 Another person from Gokarna says, “I have constructed a house in my land located near the sea and I have spent all my savings and earnings on that. But now the Panchayat is refusing to assign a house number to my property. I am not getting an approval for electricity and water connection either. They say my land falls within the CRZ area, and so I have to take permission from the CRZ authority. I built the house on own my land, with my hard-earned money, and now this CRZ has arrived from nowhere, causing so much trouble!”

As I hear these people out, I am reminded of another such worrisome conversation that I had when I travelled to my friend’s village in Bhatkal. A farmer we met there told us that he had three acres of well irrigated land near the coast of Bhatkal. He now wanted to secure bank loans to finance his daughter’s marriage and son’s education.

However, the Karnataka Rural Development Bank, (which gives loans at lowest interest rates) refused to grant his loan saying that his land could not stand guarantee because it was in the CRZ area. The farmer was bewildered and detested the CRZ even without really knowing what it was all about.

If the main objective of the CRZ notification was to protect the livelihoods of traditional fisherfolk communities, why was it actually alienating so many of them? My colleague Mahabaleshwar Hegde and I, working at the CPR-Namati Environment Justice Program, tried to understand the spread and depth of the problem. 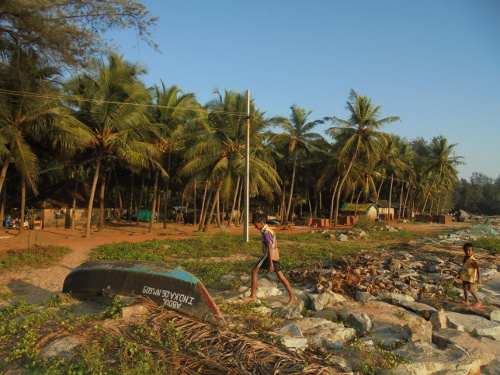 To start with, we realised that everyone has to go to Karwar to get the information regarding CRZ clearance. Even when one does end up in Karwar, the concerned officer may not be available. If you are fortunate enough to meet the official, your documents may not be sufficient.  You will also have to fill a series of forms, which is not an easy thing for many of these coastal communities.

In the 11 Panchayats of Kagal, Baad, Holanagadde, Kalbhag, Devgiri, Divgi, Mirjan, Kodkani, Bargi, Gokarna and Alkod that we visited, it was revealed that more than 58 applications for housing schemes had lapsed because the beneficiaries failed to provide “CRZ clearance”. When we spoke to the respective Panchayat Development Officers (PDO) regarding this, many of them told us that they have so much other work to do that they are unable to help each one of them to get CRZ clearance.

Only Mirjan and Kodkani panchayat officers were helping a few old women but again with limited success as there are no clear procedural guidelines from the CRZ office at Karwar (the district headquarters). The office also changes the format and list of required documents frequently as a result of which the applicants are constantly scrambling to catch up with the new methods without achieving the desired results. There are different formats for new constructions, reconstruction and repairs, and regularisation of constructions done prior to 1991.

The problem became more evident once we began calculating the time taken to get a housing approval in the CRZ area. Most people who try to get a CRZ approval themselves take about two months only to prepare all required documents in the requisite format. Often by this time the baseline format itself changes, and the process has to be restarted in line with the new procedure.

Even after the person does manage to submit the documents, there is often no response for 3-4 months. Some have waited for over a year to get a reply. Undoubtedly, this has tested the patience of people living on the coast to such an extent that CRZ itself has now become a bad word!

Government schemes such as Indira Awas Yojana, Basava Housing Scheme, Ambedkar Housing Scheme and Fishermen Housing Schemes, which provide financial aid to the poor to help them secure a roof above their head, stipulate a time frame within which construction must start. However, this limited time period is not enough to get CRZ clearances with the result that most of the poor beneficiaries are unable to start construction before the scheme lapses.

This has led to a situation where the Government is now refusing to grant any housing schemes to eligible beneficiaries living in CRZ areas. Further, in an official circular released on 11 July 2011, the Karnataka State Co-operative Agriculture and Rural Development Bank announced that it would not grant loans to locals who use their properties within CRZ as guarantee.

Clearing the air on CRZ

The enviro-legal coordinators of the CPR-Namati Environmental Justice Program in Uttara Kannada began working with local communities in 45 coastal villages and the District Level Coastal Committee (DLCC) to understand the CRZ in Uttar Kannada and help communities apply for CRZ clearance for their houses. Through this programme we have conducted street plays to create awareness on the CRZ 2011 notification and the importance of community participation in CZMP preparation at more than 40 locations.

Our team helped about 25 families to obtain CRZ clearance for house construction and guided more than 40 community members to apply for CRZ permission in the last one year. We feel particularly hopeful about our work that has helped the islanders of Aigalkoorve near Kumta. This CRZ zone which had not received approval for a single housing scheme for BPL beneficiaries since 2011 is now being granted shelters.

But to solve the problem of procedural delays and confusion, the relevant authorities would need to take proactive steps to eliminate the misconception regarding CRZ by conducting village meetings, group discussions and awareness programs for communities and implementing agencies.

In fact in village meetings, coastal communities have suggested that CRZ clearances for local housing should be brought under the Sakala Act, 2011. This Act also known as the Karnataka Guarantee of Services to Citizen Act, 2011 ensures a citizen the right to obtain documents within a certain time prescribed in the Act and the government department should provide documents within this assigned time.

While the CRZ notification is indeed needed to regulate coastal activities, its implementation so far seems to be heavily inclined to favour the larger projects and industries, who can navigate government routes effectively to wrest the necessary permissions. In the days to come, we hope to bring the CRZ implementing agencies and local communities together to design creative solutions to amend this unfortunate situation.

Vinod Patgar is a resident of Kagal village and also an enviro-legal coordinator working with the CPR-Namati Environment Justice Program in Uttara Kannada, Karnataka.