Missing the forest for the CAMPA trees

Global commitments and domestic laws are leading to afforestation of degraded and deforested lands. But scientists and conservationists argue that large scale plantations can do more harm than good if we overlook the nuances, and point out that all that is green is not forest. Abhijit Mohanty reports.

Climate change events have been increasing in frequency and severity. There is wide-spread scientific consensus that to fight this, we need to reduce our emissions of greenhouse gases urgently. But at this point, even scaling back our emissions dramatically is no longer likely to be enough. Humans have already emitted so much CO2 that we are almost certain to miss our target of limiting warming to 1.5 or 2 degrees Celsius. And reaching even this target won't halt climate change. We must actively remove carbon dioxide from the atmosphere.

Trees are an obvious solution. A tree absorbs CO2 through its leaves and converts it into carbohydrates, which provide energy for it to grow. A tree stores absorbed carbon for as long as it lives, and therefore is a natural carbon sink. But when trees are cut down, much of the carbon they've stored enters the atmosphere. In 2017, deforestation accounted for four billion tons of CO2 out of a global total of 41 billion tons - nearly 10 percent of annual emissions. Over the past 50 years, almost 17 per cent of the world's largest rainforests has been cleared. The Intergovernmental Panel on Climate Change (IPCC) says that to limit the rise in global surface temperature to 1.5 degree Celsius by 2050, an extra 1 billion hectares of trees will be needed.

At the same, there has been a growing concern about the value of planting trees on a huge scale without thinking about the nuances. While large-scale tree-planting expands the area covered by trees, it could reduce the area of native forests and hamper biodiversity. Scientists also point out that trees planted in some areas - such as those now covered by snow or grass - would absorb more solar radiation. There needs to be a delicate balance between the two effects from trees - trapping heat and absorbing carbon - and planting trees may help fight climate change only in certain areas. Studies have shown that the best places to plant new trees are in the tropics, where trees grow faster and trap more carbon.

Also, merely turning fields into forests overlooks important details about livelihoods and lives. For example, should trees be planted where crops are grown or where livestock are grazed? Planting lots of trees could also potentially displace people; it is estimated that across the world, approximately 300 million people work or live on land that is targeted by large-scale tree plantation programmes. Similarly, rugged and steep areas are not suitable for planting trees as they can add to water scarcity in dry areas. The wrong location can also deplete groundwater, dry up streams and kill off peatland, which in addition to destroying the important ecosystem also releases the huge carbon deposits stored within it.

Choosing the right locations is not the only challenge for large-scale tree plantations. Most of the time, these tree-planting programmes choose monocultures. Consisting of only limited species, monocultures store less carbon, are terrible for biodiversity, and are also highly susceptible to diseases, reveals a study published in 2020.

The total forest cover in India is currently 713,789 square km. This is nearly 22 per cent of country's geographical area. In 2021, the total forest and tree cover in India is 80.9 million hectares, which is 24.62 per cent of the area of the country, according to the data released by the Forest Survey India Report (FSIR). The forest cover is estimated from the field inventory data, which corroborates the figures obtained from satellite-based interpretation. Recently, India has pledged to get 33 per cent of its geographical area under forest cover by end of this year. Several states including Gujarat, Tamil Nadu, Maharashtra and Odisha have over the past decade launched subsidies and incentives to promote tree plantations. 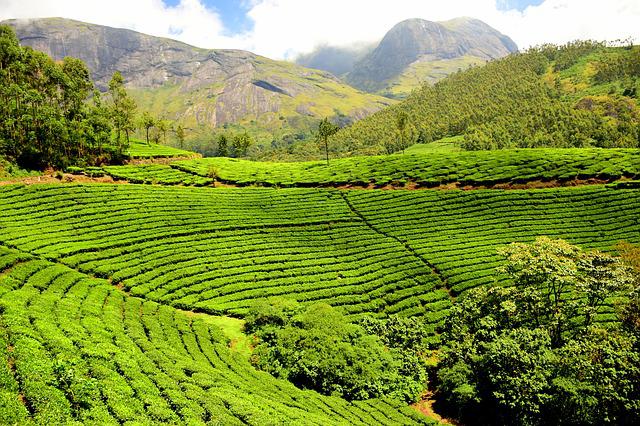 The data released by FSI has been criticised by many environmentalists. "The purported gains come largely from problematic and perverse redefinition of forest to include tea gardens (pictured), coconut plantations, urban built-up areas, native grasslands wrecked by invasive tress and treeless desert scrubs," said M D Madhusudhan, ecologist and co-founder of the Nature Conservation Foundation. There is fundamental problem in defining the forest cover by FSIR which includes, "...all lands, more than one Ha in area, with a tree canopy density of more than 10 per cent" irrespective of ownership and legal status. Such lands may not necessarily be a recorded forest area as it may include orchards, bamboo, palm, etc.

Forest landscapes play a critical role in tackling climate change. Several countries in Europe have acknowledged the urgent need to tackle deforestation and forest degradation, and enhance carbon sinks and reservoirs of greenhouse gases. The German government, in collaboration with International Union for Conservation of Nature, launched the Bonn Challenge in 2011 with a target of restoring 150 million hectares (Ha) of degraded and deforested landscapes by 2020, and 350 million Ha by 2030. India joined the Bonn Challenge in 2015 with a commitment to restore 21 million Ha, which was further raised to a target of 26 million Ha by 2030. India has also pledged to create additional carbon sinks of 2.5-3 million tonnes of CO2 equivalent from additional forest and tree cover by 2030.

Can these promises be kept? "Monitoring and reporting key indicators are important to understand what worked and what did not," said Kundan Burnwal, advisor at German Agency for International Cooperation, India. This will ensure better support for adaptive management and ensure local communities benefit from restoration.

There are three major components to holistically address forest landscape restoration initiatives. First, sustainably managing forests for enhancing ground water recharging and increasing surface flows and sub-surface flow in the rivers and springs. Second, it is important to manage forests as carbon sinks. Third, managing forests for ensuring livelihoods of millions of tribal and forest dwelling people. Besides these, having clear objectives and removing ambiguity on key aspects will be critical for India to meaningfully contribute towards its national and international climate change commitments.

India's journey of industrialisation has impacted its forests; nearly 14,000 square km of forests were cleared to accommodate 23,716 projects over the last 30 years. To compensate the loss of forest area, India introduced the Compensatory Afforestation Fund Management and Planning Authority (CAMPA). In India, one of the major ways in which afforestation takes place is through compensatory afforestation, under the Forest Conservation Act, 1980. This is defined as "afforestation done in lieu of the diversion of forest land for non-forest use."

According to the Environment Ministry, Rs.48,606 crores have so far been disbursed pursuant to CAMPA. Chhattisgarh and Odisha have received the highest amount of funding, around Rs.5,700 crores each, followed by Jharkhand and Maharashtra at around Rs. 3000 crores. But there are clearly challenges beyond funding. Data from Forest Survey India shows that between 2009-10 and 2016-17, funding by the central government increased by 84.67 per cent, but forest cover increased by only 2.42 per cent. Finding adequate non-forest lands for afforestation to compensate for the loss of forests is very challenging in states where mining is high. Similarly, in Punjab Rs.86 lakhs from CAMPA funds for afforestation remained utilized due to litigation.

Several studies have revealed that CAMPA is replacing natural forests with monoculture plantation. The complex biodiversity of a forest can never be compensated for by a monoculture plantation and likely to be hazardous to the existing ecosystem. K B Saxena, faculty at Council for Social Development, New Delhi in his research article published in 2019 said, "CAMPA has resulted in severe reduction of the tribals' access to forest resources, forcible plantation of non-native species on their village commons, pastures and even on patta land. The Act is violating tribal rights in land and forests. It has also eroded tribals' subsistence livelihood and created a perverse incentive for deforestation."

"Afforestation involves many technical details and delicate balances of different components, and it cannot solve all our climate problems," said Dr Anping Chen, Colorado State University. Large scale planting raises tough questions about how to balance the economy, environment and society, he reiterates.

"It is ecosystem, not only trees, that capture and store carbon," said Y Giri Rao, director, Vasundhara, a not-for-profit working with Adivasi communities on forest governance in Odisha. A diverse ecosystem secures the most carbon securely and it is important to nurture them. This ecosystem is home to millions of species, they protect soil from erosion, produce oxygen and help control climate, he underlined.

Protecting the existing forests would be a better use of our time and resources. Forests are capable of restoring themselves, and therefore we should allow adequate space around established forests for them to naturally expand. "This is called natural forest regeneration, and the best way to get more trees on the planet," said Neshat Azam, a Delhi-based independent consultant working on sustainable forest management. Unfortunately, very little attention has been given to promoting sustainable forest regeneration programmes, he points out.

International agreements can often become impositions on forest-dwelling local populations who were not party to the agreements at all. "Forestry schemes should not be imposed on the people in developing countries. Rather they should ensure a community's active participation and stewardship," believes Nathalie Seddon, professor of Biodiversity at Oxford University. In Ethiopia's Humbo region, for instance, farmers were encouraged to regenerate woodland by being given legal rights over the trees and also by getting trained in forest management.