A recent report by Human Rights Watch, No Tally of the Anguish provides a much-needed exposure of the real story behind averages and official data about maternal mortality, writes Kalpana Sharma.
13 October 2010 -

How do you decide when a woman's death is due to something that is not life threatening and is not a disease? Every day millions of women are routinely giving birth to children in India and adding the equivalent of another Australia to our population each year.

And yet every day, out of 100,000 live births, 254 women die. That is the official figure. The real number is much higher. This is not only because data collection in this country always falls short of the reality. Or that only 53 per cent of the total births and 48 per cent of the total deaths are registered. It is also because maternal deaths are not a clearly defined category even where such data is gathered.

The real story of women dying during pregnancy lies in this huge divergence in the two figures - one that the media ought to have uncovered, one that would expose the reality of death and deprivation in an India that is boasting of its high economic growth. But these are figures no one bothers to analyse. For the media, they are not "sexy" enough. So we report official data uncritically.

Human Rights Watch (HRW), the New York-based international organisation that brings out reports on various aspects of human rights violations worldwide, has interestingly chosen to focus on maternal mortality in India in its recently-released report, No Tally of the Anguish. The report is important because it provides a much-needed exposure of the real story behind averages and official data. Equally important, it places the issue of maternal deaths within the human rights and women's rights context.

The report has focused primarily on Uttar Pradesh. Here is a state where even the official MMR of 440 is much higher than the national average of 254. It is also the most populous state, and one that does not stand out for the quality of governance. It has the worst record in civil registration. The latest government report on registration of births and deaths reveals that UP has not submitted regular or reliable reports since 1996.

But even as we know all this, the stories from Uttar Pradesh of what women have to go through when they develop complications during pregnancy are chilling. The stories in the HRW report range from women, who desperately need blood, being forced to run from one health centre to another for a transfusion, to those with even more serious complications, including septicemia, being sent for "referral" to hospitals that are sometimes 300 km away. Most of these women do not survive the journey and die en route. Those that do make it, die shortly after they reach a hospital. None of these deaths need have taken place if the programmes already in place for maternal health care actually functioned on the ground. 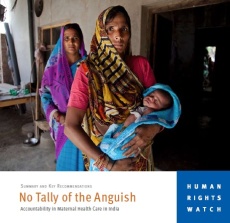 A major reason why data is fudged, and the real figure of maternal deaths is not known in India, is also because health workers are not quite sure what constitutes a maternal death. (Picture: HRW report cover image).

Most maternal deaths occur during the first 72 hours after childbirth. This is when timely and skilled intervention could make a difference. But the problem in India, and particularly in some of the more poorly managed states like Uttar Pradesh is that help never reaches these women in time. Despite an increase in the number of health facilities such as primary health centres, and the drive to get women to go for institutional deliveries under programmes like the Janani Suraksha Yojana (JRY) of the central government's National Rural Health Mission (NRHM), the maternal death rate has not come down significantly.

The reason, as the HRW report reveals, is that the health services available are poorly equipped with the skilled personnel and the materials needed in an obstetric emergency. For instance, the HRW investigation revealed that 45 per cent of the community health centres in UP did not have a single ambulance, less than a third had an obstetrician or gynaecologist, only 1 in 20 first referral units, that is facilities where women are first sent in the event of a complication, had the facility to perform a caesarean section and only one in 100 had a blood storage facility.

The second issue is that of petty corruption, which affects the poorest, those most in need of help at such times. The report has the testimony of a community health worker - or ASHA - who says, "Nothing is free for anyone. What happens when we take a woman for delivery to the hospital is that she will have to pay for her cord to be cut ... for medicines, some more money for the cleaning. The staff nurse will also ask for money. They do not ask the family directly ... And those of us (ASHAs) who don't listen to the staff nurse or if we threaten to complain, they make a note of us. They remember our faces and then the next time we go they don't treat our (delivery) cases well. They look at us and say 'referral' even if it is a normal case."

"Referral" is a dreaded word because not only does it mean additional expenditure but in some cases could cost the life of the woman.

The government gives women a cash incentive if they choose to have institutional delivery. On paper the scheme is working, as more women are choosing this option. Yet field investigations by HRW in UP revealed that even if women delivered at home, as long as they took the cash incentive, their delivery was put down as institutional. The cash was split between the woman and the health worker. Everyone benefitted, and the data was neatly fudged.

Health workers also fear that reporting too many maternal deaths in their area will be held against them. Hence they tend to under-report. There are also other anomalies. For instance, if a woman goes to her natal home to deliver and develops complications there, her death will not be noted by the local health worker as she has not monitored her during her pregnancy. Yet, the custom of the woman going to her mother's home in the last few months before delivery is virtually a norm in almost every community.

All states are not as bad as UP. Tamilnadu, for instance, has made a dent in reducing its maternal mortality rate by taking simple steps to improve monitoring and data collection. Districts like Theni in the state provide a model of what can be replicated in any district in India. District authorities have made a concerted effort to locate the problems in delivery of services and tried to address them. For instance, instead of the "referral" system, the district has introduced the "accompanied transfer" system, where the health worker goes with the pregnant woman to the referral facility. A simple step like this helps women get the help they need and improves accountability.

What reports like the one from HRW emphasise is the importance of constant monitoring of systems and not just the institution of centrally run top-down programmes. However well-intentioned the latter might be, they clearly fail to make a difference on the ground. It is also a reminder to institutions like the media that they should be looking beyond official figures and probing the real story of India's mal-development.