The survey of child labour in agriculture has helped to draw attention once again to many issues that must be addressed if every child is to have a meaningful right to education, writes Kalpana Sharma.
13 February 2011 -

The young girl, in a yellow salwar kamiz, spoke hesitatingly into a microphone. The brightly lit stage, the darkened auditorium, the microphone were enough to terrify any young girl. More so if she was not familiar with the big city and came from rural Maharashtra. Yet, Tabassum Sheikh Latif from Shirola village in Maharashtra's Akola district testified clearly and simply about her life as a child worker. The occasion was a public hearing organized by Save the Children on child labour in agriculture in Maharashtra.

A day before the hearing, the Maharashtra government had released data that suggested that enrollment in schools across the state had increased and stood at over 90 per cent. One was supposed to believe from this that the majority of children in the state were now attending school.

Tabassum's story revealed a rather different picture. I want to go to school, I want to become a teacher, said the 11-year-old. But instead she spends her days working with her family in cotton fields like millions of other children across India. During Diwali she works in a factory that makes firecrackers, an occupation specifically banned under the Child Labour (Prevention and Regulation) Act 1986.

Yet, while handling hazardous material is specifically prohibited, all forms of agricultural work are not disallowed for children under 14. So girls like Tabassum can be found in cotton fields plucking and doing cross-pollination. Their hands get cut from the thorny bushes; they inhale the pesticide sprayed on the plants. Some of the pesticide rubs off on their hands, gets into their eyes. They complain of skin problems, nausea, giddiness. Yet, this work is not considered hazardous for young children like Tabassum.

Even as the government introduces new laws aimed at children's welfare, it is becoming increasingly clear that there is an urgent need to look at all these laws together, iron out the contradictions and find ways to make their implementation more rigorous and effective. 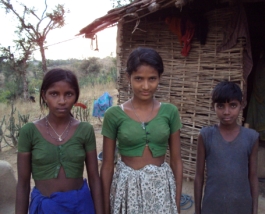 The RTE lays down that all children under 14 should be enrolled in school. Yet the Child Labour Act does not expressly prohibit the employment of children in agriculture, and an estimated 5.6 million children, or two thirds of all children employed, are working in the fields. (Above: Ramila 14, Hanju 14 and Deepak, 13 from Dungarpur district worked in cottonseed farms in Gujarat.)

First, who is a child? According to the Child Labour Act, anyone under 14 years. According to the Juvenile Justice Act, anyone under 18 years. The Right to Education Act has laid down that all children, up to the age of 14, have a right to education. Yet India is a signatory to the UN Convention on the Rights of the Child where the prescribed age is 18. So even before discussing further areas where laws like the Child Labour Act need to be applied, there needs to be some consistency on the definition of the child.

Second, look at the list of occupations that the Child Labour Act considers hazardous and therefore not permitted for children. It does not include agricultural work even though studies have clearly shown how much of agricultural work is hazardous. Children are bent over during the sowing season for hours. They stand in the hot sun picking cotton. In fact, there is a strong demand for children in the cotton fields because their short stature makes them the right height to pluck the cotton. A 2009 survey by Save the Children in Gujarat estimates that there are over 580,000 children employed in four major cotton-growing districts of that state.

Children are also employed to cut sugar cane, to weed, to dig, to carry heavy pitchers of water. None of this is easy work even for adults. For children, many of them nutritionally deprived, the effect is not just extreme exhaustion but even permanent damage to their health. Yet agricultural work is not part of the list of jobs that children are permitted to do.

Although handling of pesticides and insecticides is expressly prohibited, slightly older children who cross 14 years are sent out to the fields to spray insecticide or pesticide with cans strapped to their backs and without any protective gear. Given the lax implementation of the law, rarely are the employers of such children caught or charged.

What this means is that even if on paper these children are enrolled in school, in fact they do not attend school for more than a couple of days in a week, and sometimes are absent for months at a stretch if their parents are migrant workers. What will such children learn by the time they become 14?

The public hearing in Mumbai had one child after another stating how much they wanted to study. They wanted to be teachers, doctors, lawyers - but they were not able to attend school regularly because their families needed them to work.

Swapna from Washim district says she is 12 years old and in the 6th standard. "I go to school and to work", she says. She has to walk three to five km each day to work. She leaves for the fields at seven in the morning and returns at ten. In addition, she has to do all the housework as her mother is out all day and her grandmother is too old. "I feel I should study", she says, but she only manages to go to school a couple of days each week when she is not needed in the fields. By the time she becomes 14, she will barely have finished her 7th standard. How does that give her an option other than agricultural work?

Deepali is 14 years old and in the 8th standard. She wants to study and become a doctor. But like the others, she too has to wake up at six and go to work in the fields. "Once, when I was going to work on the tractor, my teacher saw me. When I went to school the next day, she made me sit in the back of the class", she recounts, breaking down while doing so. Deepali is really small for her age. She looks like she is 11 years old. She talks about her friend, who is her age but who is bigger than her. "The sowkar looks badly at her", she says sobbing, revealing another reality that girls in particular have to face, that of sexual harassment.

Swapna at least manages three days of schooling per week. But children like Trupti from Aurangabad district miss out on six months of schooling each year. The 13-year-old is now in the 7th standard. She began working at the age of six and since then she has migrated with her family to Sangli district every year during the sugar cane cutting season. As a result she misses out on school altogether. Her job is to tie the cut cane, collect water and do the housework. According to a study by Janarth, an NGO based in Aurangabad, an estimated 200,000 children between the ages of 6-14 migrate with their parents during the cane-cutting season each year.

So while under the Right to Education, these 8.6 million child workers should be enrolled in school like other children, and should attend school until they are 14, the reality on the ground is that two thirds, that is those working in agriculture can only attend school sporadically, or have to skip it for at least half the year.

Whether child labour can be banned altogether has always been a contentious issue particularly as it cannot be disengaged from the issue of poverty. Even if children earn half of what their parents are paid, for families that can barely feed themselves, every rupee counts. Persuading or commanding such parents to send their children to school cannot work unless it is accompanied by an incentive or some alternative.

Yet, the survey of child labour in agriculture has helped to draw attention once again to the many lacunae and contradictions in existing laws that must be addressed if we are to reach the goal of giving every child in India the right to education.