The popular narrative about how media chooses what it covers is that reader preferences are not a big factor. But is that true? A study of media coverage of land conflicts, the Covid-19 crisis and the Farm Bills provides some answers.

Media plays an important role in informing and shaping public opinion around major issues. They provide a check on failures in governance, keeping things from getting out of hand. Speaking of food security, for instance, Amartya Sen has argued that "the government cannot afford to fail to take prompt action when large-scale starvation threatens. Newspapers play an important part in this, in making the facts known and forcing the challenge to be faced". Development scholars have also pointed out that Indian states that have a higher newspaper circulation perform better in terms of distributing food under the Public Distribution System.

Media, thus, has the ability to impact large-scale outcomes through its reportage. This, then, begs the question: how does the media decide which issues to raise? The answer commonly veers from the media picking sensational topics to ideological inclinations of the media houses, to covert or overt pressure from stakeholders like the government, businesses, and communities. The demand side - what the readers prefer and want to read - is largely missing in this narrative. But is it true?

Certainly, there is a significant and persistent trust deficit between the people and the media in India; only 38 per cent of Indians trust most news, compared to 65 per cent in Finland, 54 per cent in Brazil, 50 per cent in Thailand, and 43 per cent in Australia, to cite just a few other countries. Low trust is usually ascribed to media bias. This conclusion comes naturally, considering that close to 70 per cent of media revenue comes from advertisements and only 30 per cent from reader subscriptions. This reinforces the view that media houses would be only mildly attentive to what readers want.

Can the popular narrative be tested? At the Centre for Social and Economic Progress, we looked at coverage of land conflicts involving communities in the English media. We compared the occurrence of conflicts vis-à-vis coverage, to see if media reporting is linked to reader interest.

Reader interest, in turn, is driven by the location of the conflict and of the reader, the intensity of the conflict, and the involvement of a known entity (person, corporation, etc). The argument is not that reporting may not be 'influenced' or 'sensationalised', but instead that there are other, more objective reasons as well which play a key role in deciding coverage. This is a crucial finding, helping reinforce faith in the institution of the fourth estate which is critical for a well-functioning democracy, while at the same time highlighting the need for introspection and caution.

We gauge the location of 714 ongoing land conflicts involving communities tracked by Land Conflict Watch. We find that conflicts occurring in rural areas account for more than two-thirds of the cases. This seems intuitive, since larger conflicts involving communities most likely pertain to issues such as land acquisition, and these are more likely to occur in rural areas than in areas that are already urbanised.

However, when we turn our gaze to the location of the conflicts reported in the media, we see the opposite. Leveraging the Global Database of Events, Language and Tone, arguably the world's most comprehensive database monitoring news media, we derived a list of 58 land conflicts covered by the media and find that 39 of these 58 conflicts are located in urban areas. Thus, while rural areas account for 70 per cent of the actual occurrence of land conflicts, the media reports nearly 67 per cent of such conflicts from urban centres.

Not only is the frequency of media reporting on urban conflicts greater, but each urban conflict is also covered much more extensively than those in rural areas; this is despite the fact that a much larger number of people are potentially impacted in the latter. 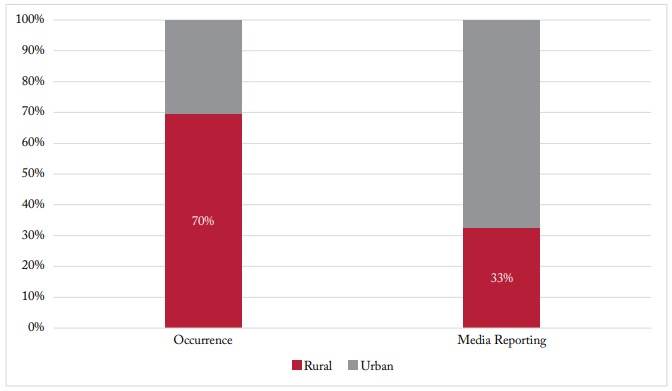 This skew persists even in the most widely covered conflicts. We deep-dived into seven of the 58 conflicts, three of which are urban - Alibaug illegal structures, Thoothukudi copper plant, and Kathputli Colony - and four are rural - Mumbai-Ahmedabad High-Speed Rail Corridor, Amaravati Capital City, Manipur Bills, and Forest Rights Acts. The four rural conflicts in our sample are about 15-20 times as large as the three urban conflicts in terms of the number of people affected, and yet, they garnered about 20 per cent less media attention as compared to the latter.

It is natural to question the reasons for this apparent disconnect. This may be happening since a majority of the 40 million English newspaper readers reside in metropolitan centres, whereas the 470 million readers of regional newspapers are largely concentrated in smaller towns and rural areas. For example, The Times of India, Hindustan Times, and The Mumbai Mirror are the three most widely read dailies in Mumbai; however, the most widely read dailies in all of Maharashtra are three regional newspapers, Lokmat, Daily Sakal, and Pudhari.

Since a majority of the readership of the English language media is centred in and around urban areas, covering issues occurring in close proximity to the readers' surroundings is of more importance to them than conflicts that may be much bigger in scale, but unfolding in a distant, rural setting.

Covid and the Farm Bills

We further tested our framework of reader interest driving coverage, by applying it to other platforms and issues, and found that the framework holds up to the test. We scraped data from the Twitter handles of nine prominent media houses for the COVID-19 oxygen crisis. During the second wave of the pandemic in India, the inadequate provisions of medical-grade oxygen came to light. Of all the scraped tweets mentioning 'oxygen' during this time, Delhi's share was about 30 per cent. Considering that Delhi accounts for about 1 per cent of India's population, a 30 per cent share seems inordinately high. 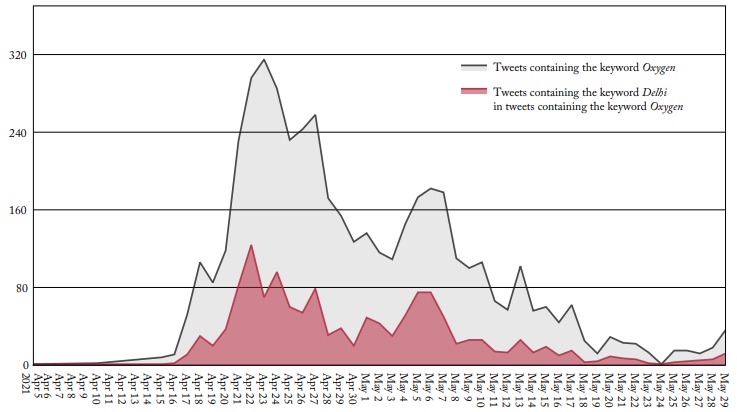 Two main conclusions can be drawn from this. First, reader interest plays a key role in shaping coverage. Second, what readers want to consume may or may not be in consonance with reality and with what needs more urgent redressal from a larger, country-wide perspective. For example, by highlighting Delhi's oxygen shortage, the media exerted its influence and pressure to force a response from policymakers.

However, an improvement in Delhi's oxygen situation may not necessarily have reflected a pan-India improvement of the crisis, which is what the tweeting pattern would appear to suggest. In a sense, the system was let off the hook by the media once the crisis neared resolution in Delhi, even though scrutiny of public health management should have continued until the problem was fully addressed for the entire country.

The urban fingerprint may also be apparent in media coverage of the protests against the three Farm Bills that were passed by the Centre in 2020. Two distinct spikes were seen in Twitter handles of media organisations reporting on the protests. The first occurred immediately after the passage of the Bills, and lasted a month or so. The second, much more sustained, peak in mentions shows up after the farmers converged around Delhi in an apparent effort to march into the capital. This spike could reflect an organic intensification of the movement. Nonetheless, to the extent that the reporting through tweets spiked soon after the 'Delhi Chalo' call, there was some degree of influence that the mention of the metropolitan city had on reporting. 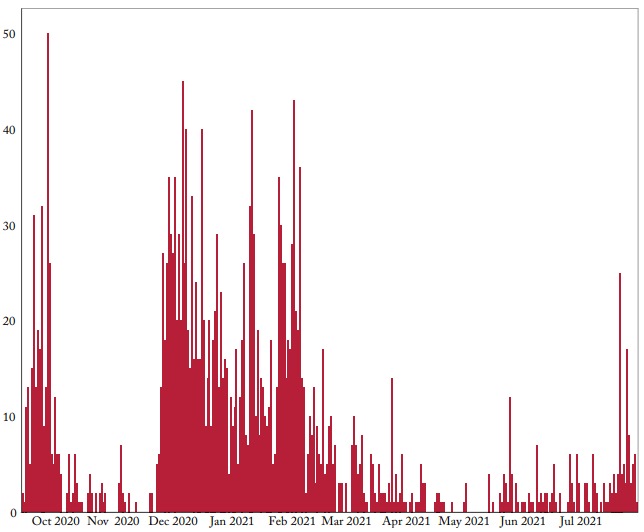 Number of tweets from selected media handles addressing protests in the context of the Farm Bills.

These findings serve as a timely wake-up call for policymakers not to rely only on English-media coverage as a means of staying informed about the key issues facing the country, given its urban skew. How and what the media reports have a significant bearing on how people perceive the world around them. More research and deliberation are required to understand media reporting and assess its potential impact in order for policy discourse to thrive. Strengthening this key pillar of accountability that upholds the fundamentals of democracy is all the more vital in the present age.

This article is extracted and adapted from a Working Paper by the authors, who are with the Centre for Social and Economic Progress.