Impunity prevails, but what is the solution?

In 50 percent of the killings of Indian journalists since 2010 there have been no arrests so far. We need to come together to protect our tribe, urge Geeta Seshu and Sevanti Ninan.
04 November 2017 -

Being a journalist is increasingly dangerous business. Both at home and abroad. When there is injury to life and limb, perpetrators are almost never brought to book. Which is why the UN observes since 2013 an ‘End Impunity for Crimes against Journalists Day’ on November 2nd. 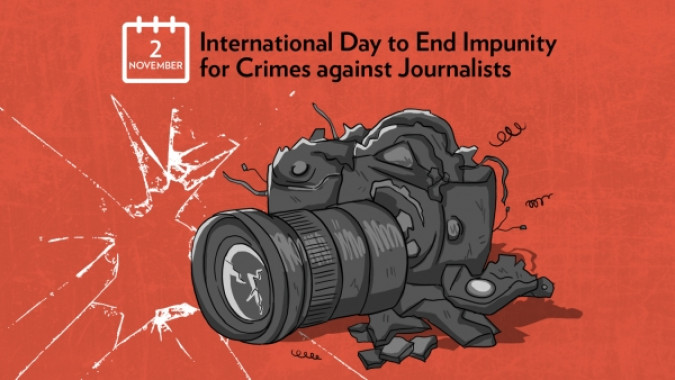 What does it achieve?  It provides an occasion to focus the attention of governments on a grim problem. UN Secretary‑General António Guterres set the context in his message this year.  From 2006 to 2016, 930 journalists and media workers were killed he said.  Thousands of others routinely face sexual harassment, intimidation, detention and ill treatment.  Rampant impunity then compounds the crimes.  In 9 out of 10 cases, the perpetrators are never brought to justice.

“When journalists are targeted, societies as a whole also pay the price.  The kind of news that gets silenced — corruption, conflicts of interest, illegal trafficking — is exactly the kind of information the public needs to know.” To that list for India we could add illegal mining of various kinds.

Impunity means exemption from the injurious consequences of an action.  Or,  quite simply,  getting away with murder. It is now increasingly used in India  to describe the growing vulnerability of all levels of journalists. When three are killed in a  month as happened in September this year,  it means impunity prevails.  So far there have been arrests in only one of those three cases.

Blaming his journalism for a reporter’s death is tricky when many poorly paid reporters and writers in the country’s mofussil areas do more than one thing for a living. Even so, as the list of those killed since 2010 grows longer,  and the proportion of perpetrators brought to book shrinks, it seems evident that journalists are  primarily killed or attacked because of what they expose, and the police inaction has something to do with their hands being stayed by those in power.

Of the 30 journalists whose killings we have tracked since 2010,  there have been arrests in 14 cases, a conviction in one,  and a closure in one case with no arrests made.  In the remaining 14 therefore, there has been not even an arrest so far. In other words, in 50 per cent of  the cases there has been no action. This year eight killings have been reported till now,  the evidence points to their reporting being the reason in half these cases.

There have been 45 incidents of attacks on journalists so far in 2017, several of these brutal. As culled from reported incidents. When the statistics from the National Crime Research Bureau come the figure will be much larger, since they are collected from police stations around the country. In 2014 and ‘15 these have been well over a 100 each year.

Coming together to discuss the issue in UNESCO’S Delhi office journalists made the following observations:

Why is nobody brought to justice? The answer to this last question lies in who the perpetrators of violence against reporters and writers are.  In India the answers are leading back to politicians and criminal elements among them more than any one single category.  When political elements are behind an attack, police and investigating agencies develop conditions ranging from amnesia to cold feet.

The majority of instances of killings of journalists and attacks, with the exception of the killing of Gauri Lankesh in the heart of Bengaluru on September 5 this year, occur far away from the seat of power either in the Centre or in the States. Leave alone follow ups, even immediate basic information about the journalist of the circumstances leading to the violence become difficult to access.

But it is not just the attacks and killings. That comes later. Invariably, there is a prolonged period of threats that journalists do get and they either ignore it or try to live with it, until it is too late, said Advocate Colin Gonsalves who spoke on the urgent need to put together a national legal defence for journalists.

The threats, as journalist Mohammed Ali of The Hindu, reporting from the heart of the cow-belt in Meerut in Uttar Pradesh discovered, play an insidious role in creating a fear psychosis in the mind of the journalist. Often, the journalist is doxed, with details of place of residence etc shared on social media. Ali, who was forced to shift residence, found twitter trolls closely following his work and questioning his credentials. Routinely abused for his reporting, reminded of his religious minority status and questioned over his legitimacy, the threats are ever present.

When journalists dissent, uncover corruption or record patently illegal acts, they come under the radar. And, as the arrest of  former journalist Vinod Verma in Ghaziabad, Uttar Pradesh, on Oct 27 showed, the Chhattisgarh police could pick him up without even an arrest warrant.

Ultimately, the incidents of crimes against journalists occur with such regularity because those in power know they can get away with it. When journalists are threatened or attacked, the support of their colleagues and the media houses they work for will go a long way to combat this impunity.

A united response against attacks and threats was the overriding plea of young journalists at the meeting.

Geeta Seshu and Sevanti Ninan are consulting editor and editor of the Hoot.