Schooling the children of migrant labourers

As more poor migrant children face exploitation in Kerala, some schools are coming up with ways to enroll and retain them. A few schools now have more migrant than local students. Navya P K reports.

Diwali, a student of Kandanthara Government Upper Primary School, is carefully copying down Malayalam alphabets written on the board, in her notebook. Hailing from Bengal, Diwali’s parents are manual labourers at Perumbavoor industrial area in Ernakulam district. She says that she can speak a little Malayalam, but can read only Bengali. Her teachers say that she is one of the bright students in her class.

In recent years, schools around industrial areas in Ernakulam district have been taking in migrant children, whose parents mostly work in plywood and hollow brick industries. Natives of West Bengal, Orissa and north Indian states, they live in poor conditions, usually in cramped one-room rented houses without any facilities. The children do not go to school; they are locked up by parents while they go to work, or are seen roaming the streets.

Without any schooling, they are likely to start working at an early age. India Together had earlier reported on the increasing number of migrant child labourers in Kerala, including in industries in Ernakulam district.

Some schools, mostly the government ones, have been proactively identifying and enrolling these children, and a few now have more migrant than local students. This has helped some schools stay afloat. While children are able to attend school and be safe from exploitation and work, the higher student numbers keep schools from being shut down.

Migrant children are admitted to age-appropriate classes even if they had not gone to school before or don’t know Malayalam. But as the schools are in Malayalam medium, children face difficulties in coping with studies. To integrate them, schools have developed special programmes.

Kandanthara Government Upper Primary School was among the first to start an active campaign to bring in migrant children, 7-8 years back. The school was in threat of being shut down as the preference for English medium schools had increased. 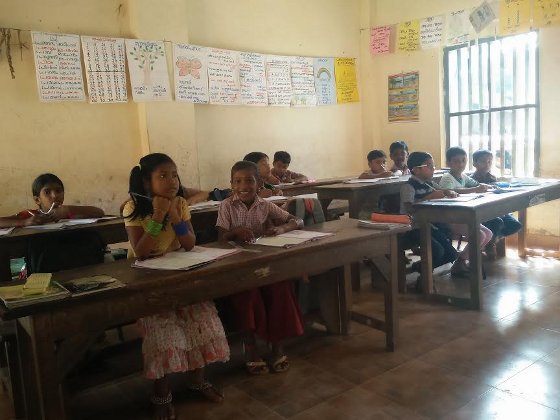 School Headmaster Baby George says, “The school’s Parent Teacher Association (PTA) scared migrant children’s parents saying they would call authorities if children were not sent to school. More children started coming to the school once parents felt safe about sending them.” Now 112 out of the 177 children in the school rolls are migrants, mostly from Murshidabad in West Bengal.

Malayidam Thuruth Lower Primary School had only 18 students at the start of 2015-16 academic year. Migrant students were brought in by the initiative  of Headmistress (HM) V S Lillikutty, who had joined the school that year. Now 43 out of the 58 students here are migrants, mostly from Orissa.

In some schools like North Vazhakulam Upper Primary School, HMs and School Management Committees (SMCs) brought in children due to their interest in implementing RTE Act. Teachers sometimes spend money for migrant children or get them sponsors. They also have to get Aadhar cards made for children before enrolment, as most children don’t have any ID cards.

Sarva Shiksha Abhiyan (SSA) funds children’s textbooks and uniforms only if they are in school rolls. Lillikutty says that, in the first year, many children were not in the rolls as they attended school intermittently. “So we had to approach local organisations for funds. Two companies funded children’s books, uniforms, shoes, bags etc. This year, SSA is funding uniforms and textbooks, but the companies will sponsor other materials. An individual supplies good non-vegetarian lunch,” she says. Yet, teachers at this school pay Rs 200 per day for an auto for migrant students’ school transport.

Lillikutty says that at times she was unable to support children too. “Last year, 5-6 children moved to a different locality when their parents lost their jobs here. I asked SSA and village panchayat for funds to find and bring the children to school, but did not get it,” she says.

In Binanipuram Government High School, breakfast and snacks are given to children who need it. Seventy migrant children, mostly from Uttar Pradesh and Bihar, study here. “Many of them suffer from nutritional deficiency. If any rations remain from the donations we get, we give it to children to take home. Teachers also take care of students’ health expenses if needed,” says Headmistress Mangalabhai M. With Rotary Club’s support, the school has also started a tailoring unit for the students’ parents.

Lizzy Babitha Deepu, Ernakulam Urban Coordinator at SSA, says that 10 schools in the district now have SSA’s Special Training Centres. The centres have a volunteer who takes extra classes for migrant children in their own language. Schools themselves have to identify volunteers, but SSA pays their monthly salaries of Rs 5000. “The first two volunteers were appointed in 2014, when Kandanthara and North Vazhakulam schools approached us,” says Lizzy. SSA also gives schools the state syllabus textbooks of migrant children’s home states, by coordinating with SSA in those states. Volunteers use these texts to teach various subjects to children.

In Kandanthara school, Aktarul Islam, from Murshidabad himself, teaches Bengali and Hindi to migrant students. Islam is a history graduate, but had come to Kerala due to financial difficulties. He was running a nearby dhaba in 2014, when the school PTA recruited him. He is allotted some hours, during which he brings together migrant students from different classes. “I make students from second to fourth standard sit together, and fifth to sixth standard together. I then categorise students into different groups and teach each separately.”

In North Vazhakulam Upper Primary School, a migrant student’s mother was appointed to translate classes from Malayalam to Bengali. “She translates Maths and Environmental Studies (EVS) hours in lower primary classes. Migrant students are mostly in lower primary, and these two subjects are most difficult for them,” says HM Mini Mathew.

Teachers use some Hindi in their classes so that migrant students can understand them. Some schools allocate hours in which children can learn their mother tongue. Schools also give them extra classes on academics, life skills etc. Initially most children have poor hygiene, but this changes with awareness classes for both children and parents, say most of the HMs.

Some classes are for cultural integration. North Vazhakulam school, for example, has classes where children are taught parallels between Kerala and Bengali cultures. Binanipuram school uses videos and other pedagogic tools in classes. Older migrant students here design and write their own small books in Malayalam, which are given to younger students to read. The school has a 15-20 hour programme for migrant students in fifth to seventh standard, to learn Malayalam.

Despite such programmes, migrant children’s academic performance is much lower than that of local students, say teachers.

“We don’t know if what students understand is the same as what we teach them in Malayalam,” says Remya K Mathew, teacher at Malayidam Thuruth School. And even though volunteers teach children in their own language, children finally have to write exams in Malayalam. Though children start understanding Malayalam after a while, reading and writing is difficult in the first few years. This is more so for children who join directly in higher classes, as they have to start with learning basics while other students learn advanced material.

For teachers, paying attention to students of different learning levels within the same class is difficult. They also get transferred often. Lillikutty says that two teachers in her school left last year due to difficulties in teaching migrant students. Parents of migrant children are mostly illiterate and unable to help them with studies, unlike in the case of local children. Lillikutty says that 10-11 year old children have to prepare lunch for their working parents, before coming to school.

Migrant children also leave school midway when parents go to their native places for any event, or when work is less. After demonetisation especially, many children went back as their parents did not have work anymore.

In Kandanthara school, for instance, only around 70 migrant children out of 112 in the rolls, actually remain. Children are allowed to rejoin when they come back after some months, but the absence affects their studies, say teachers. Some don’t come back at all. Islam says that some four children in Kandanthara school used to work on school holidays, and went back to Bengal last year when their parents had no work here.

Teachers opine that children will benefit from bridge schooling before they join schools. Lizzy of SSA says that bridge schooling material for first standard has been given to schools. “The material for second standard will be ready by next academic year. We are planning to develop material for up to fourth standard.” She says that SSA’s survey this year showed that some 2000 migrant children were studying in various schools across Ernakulam district. Some schools in Idukki and Malappuram districts have also admitted  migrant labourers’ children, but not as much as in Ernakulam, says Dr Kuttikrishnan A P, State Project Director, SSA.

Despite limitations, teachers say that migrant students are very bright and pick things up quickly. They excel particularly in maths, work experience and co-curricular activities. Those who join from first standard know Malayalam as well as the local children do. With some support, all the teachers believe, these children can achieve a lot.