Success in one initiative to strengthen public schooling can help reach some goals of other initiatives too. The Bal Sansad program in Uttar Pradesh shows how focusing on hygiene is improving attendance too. Puja Awasthi reports.

Can schools which promote hygiene also have better levels of attendance? Yes, say numerous studies. And as some districts of Uttar Pradesh show, children can script that change while developing leadership qualities.

One such district is Bahraich - which reports some of the state’s poorest development indicators. According to the National Family Health Survey-4 (NFHS, 2015-16) data, for instance, less than half of the district’s female population has ever attended school while just over one-third of its women are literate. Further, as data from the District Information System for Education shows, at the primary level almost one in 10 schools has just a single teacher. 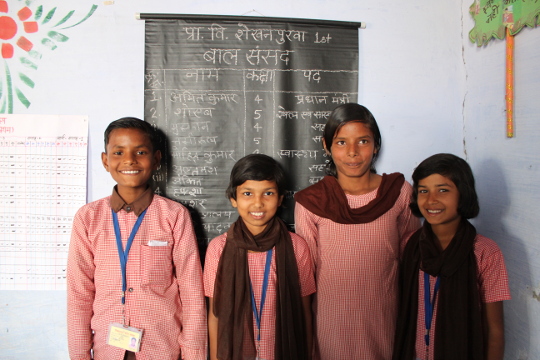 Through the Bal Sansad (Child Cabinet) program, children across 100 schools in the district are taking the lead to ensure better sanitation and hygiene not only in schools, but also in their homes and neighborhoods. How does this matter to school attendance? Well, according to one estimate, 1.9 billion school days can be gained if the UN’s goals related to safe water supply and sanitation are achieved and the incidence of diarrhea reduced.

The Bal Sansad is one of the most vocal manifestations of the School Hygiene Education Programme supported by the Aga Khan Foundation as part of a partnership with the Dettol Banega Swachh India (DBSI) initiative. In its background lie other interventions such as the training of teachers to deliver a hygiene curriculum through 15 lessons, the orienting of children to oversee WASH (water, sanitation and hygiene) activities and the setting up of a hygiene corner.

Children who have been targeted under the programme can easily identify the link between hygiene and schooling. Amit Arya, a student of class 4 at the Primary School at village Shekhanpurva (1st) says, “When we are clean, we are healthy, and we can concentrate much better at school”. Arya is the Prime Minister of the Bal Sansad- a 13 member nominated body of students that has taken charge of ensuring that cleanliness becomes the norm for the school and its students.

The body has designated ministers and members for various committees on food, education, environment, and games and culture. Afza Azam, the Education Minister at the school reels off a long list of tasks that the body performs- checking that the cook washes her hands before cooking the mid-day meal, ensuring that the cooking area is clean and there are no cobwebs, monitoring that all litter in the school goes into dustbins, lining up children to wash their hands before and after the mid-day meal, watering the plants in the school premises, checking that nails are cut, hair combed and uniforms clean. She admits it is not always easy, “It is very difficult to make children understand. But our power is increased when we work as a group”. 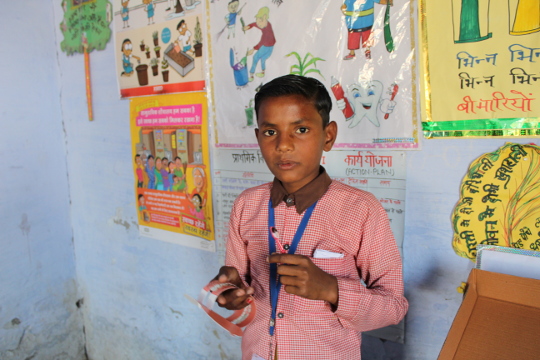 Arya says that the group sometimes needs to be very strict. “We have gone as far as asking children if they would like us to bathe them or cut their nails. That usually works”, he says,

Every Saturday the group meets to discuss challenges and thrash out problems. It also deliberates on how to approach parents of children they are unable to turn around. Shazia Begum, another Bal Sansad member from class 5 says, “We learn from each other about what we can do after school. For instance, I now talk to the older girls in our village about cleanliness and also demonstrate hand washing to them.”.

Arya has been using a forceful argument in his village to get people to make and use toilets. “If you are sick you pay whatever the doctor asks you. Why not spend some money to prevent illness by making a toilet”, he says. He believes this logic has impacted at least six families in his village who are now in different stages of toilet construction.

A similarly active Bal Sansad is taking the lead at the Primary School in the village of Dhobha. Sapna Jaiswal, a class 5 student who is the Prime Minister says, “Our school did not look this nice earlier. Now we are proud of it”.  This pride is generated by a refurbishment of the school toilet, the tiling of the hand wash station, the bright wall painting on WASH and peers who are as enthusiastic about cleanliness as the members of the Bal Sansad.

Mohit Vishwakarma, the Minister for Games and Culture displays a deep pride in his role, “We have been chosen because we can learn new things easily. Sometimes children don’t listen to us and then we warn them in our own way. I once told a boy that I would set him right when he crossed my home. That seems to have scared him”, he chuckles. 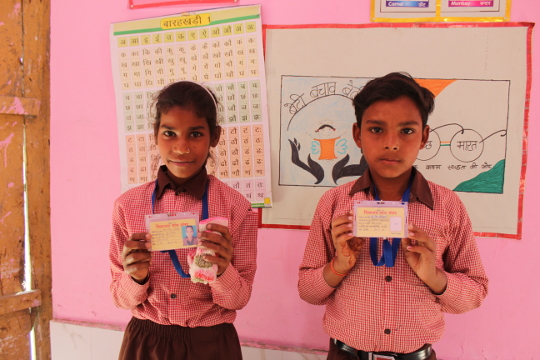 The school at Dhobha has overcome a crucial challenge to effective WASH efforts by setting up a Soap Bank for which community members donate soaps. These donations are entirely voluntary with no stipulations of size or brand. Jaiswal and Vishwakarma proudly show off the register which has listed more than 100 soaps with the date and name of the donors. The bank, a cardboard box, sits in a ledge at the Hygiene Corner.

Membership of the Bal Sansad has also given children the confidence to dream big. Arya for instance wants to become pradhan of his village when he grows up while Jaiswal says that she is would like to take the message of cleanliness beyond her village.

The road to achieving complete sanitation at home and in school can however be beset with challenges much beyond what the children can address. At another Primary School of the district at Risiya Mod for instance, Ashok Kumar, a student of class 5, admits that brushing and bathing can be chores as his family does not have a source of running water. He counts the number of buckets of water his family of eight needs to get through a day and says, “I have to fetch water from the government handpump in my village”. Such inadequacies can also lead to a sense of helpless in children. Shivam Kumar, another class 5 student of the same school says, “I felt ashamed when my classmates pointed out that I was dirty. I try to be clean now”.

Shyam Kishore Tiwari, the Basic Shiksha Adhikari (BSA) of Bahraich underscores the importance of sanitation for education. “Sanitation impacts every child. If a child goes out of the school to use a toilet or any other basic necessity, there is every chance that the child will not come back.” Though there have been no official studies as yet, he says that huge improvements in attendance, to the extent of 25%, have been noted in schools where the intervention has been made.

The Bal Sansads are clearly a good beginning, with immense potential for benefits beyond the original design of the program. The links they reveal between different aspects of public education are important lessons for administrators and political leaders.

TIGER SANCTUARY : Are tigers back at the Buxa reserve?
MORE ARTICLES
on similar topics ...
CHILD HEALTH