The recently released draft of the National Education Policy stresses the importance of education in the mother tongue. Data from historical events in South India show the potential of this shift, say Tarun Jain and Revathy Suryanarayana.

The recently released draft of the National Education Policy stresses the importance of education in the mother tongue, especially in the formative years at school. While acknowledging the innate ability of children to pick up multiple languages, the policy draft suggests that, “All states and UTs, if they so desire, may provide education in schools, up to Class V, in mother tongue, local or regional language as the medium of instruction.”

The question of which language to teach in schools is not new. Writing in 1938, the Zakir Hussain Committee championed vernacular instruction in schools, a suggestion later echoed in 1964 by the Commission chaired by the eminent educationist D S Kothari as well as the National Policy on Education in 1968. Yet the mismatch between children’s mother tongue and the medium of instruction in schools was not resolved, with Kothari observing that, “In no country in the world, except India, is to be seen this divorce of the language of education from the language of the pupil.”

News stories celebrate the success of immigrant children taught in languages other than their mother tongues. If children adapt early to new languages, mother tongue effects might not be so important, and policymakers could increase efficiency by teaching in just a few national languages.

New evidence using data from large-scale historical events in South India uncovers this link between vernacular language use in schools and educational achievement. Colonial-era provinces were formed without much regard to language. In South India, provincial boundaries were mostly determined by the sequence of British military conquest with some provinces cobbled together as the company rule extended from the coasts to the hinterland, with some areas remaining under the agency of princely rulers.

Till the mid-19th century, education in India mostly followed indigenous systems without resorting to standardisation, and was largely restricted to the social and economic elites. Subsequently, when East India Company officials started focussing on administration of their conquered territories, they introduced formal education to train potential employees for clerical positions, as well as to create acceptance of Western traditions and colonial rule. Following Wood’s Despatch  in 1854 (*), most provinces used the dominant vernacular as the medium of instruction. For instance, Tamil was used as the medium of instruction in most districts of the Madras Presidency, except for Telugu in the districts that form the present state of Andhra Pradesh.

Consequently, the numerically-dominant mother tongue was the same as the official language of the province in some districts (matched districts) but not in others (mismatched districts). For example, in the state of Hyderabad, the medium of instruction until the 1950s was mostly Persian/Urdu, which was at odds with the mother tongue of many residents in the Nizam’s  Dominion. Writing in 1886, Motaman Jung of the Educational Department of Hyderabad stated “Considering the population, schools ought to exist, as far as mass education is concerned, in the following ratios: Telugu 4, Mahratti 3, Canarese 1, Persian 1. Facts however show the reverse of this viz., Persian 4, Mahratti 2, Telugu 1, Canarese 0.” 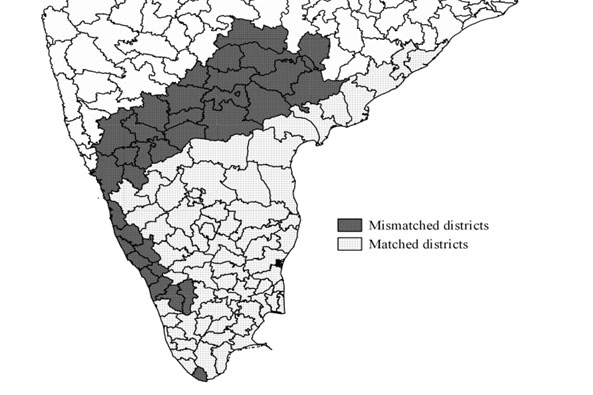 Comparing matched districts to mismatched ones is like a natural historical experiment on the effects of using mother-tongue instruction in schools on long-run educational outcomes. District-level data from the Census of India shows that mother-tongue instruction led to persistent increases in educational achievement that lasted well past Independence till the 1980s.

The impact was greatest in primary and secondary schooling, which is mostly conducted in the vernacular. Specifically, the literacy rate in districts where students were taught in their own language was 18 per cent higher than in mismatched districts, and the middle school completion rate 25.2 per cent greater. The difference in university education was very small, which is not surprising since most post-secondary instruction in the colonial era was conducted in English.

In 1956, following the recommendations of the Fazal Ali Commission, the government reorganised the state boundaries in South India on strict linguistic lines. A key policy change that was implemented in all states after reorganisation was to extend the official language of the state as the medium of instruction in schools. This meant that more students were now offered schooling in their mother tongues. Did the districts that were mismatched to begin with then start to ‘catch-up’ in subsequent educational achievement?

The district-level Census data shows that reassignment had a large and significant impact on literacy, middle-school completion, and matriculation rates. Hitherto mismatched districts experienced higher growth rates than matched districts as they caught up with the latter. Specifically, the growth rate was 37 per cent higher for literacy, 56 per cent greater for middle-school completion, 60 per cent for matriculation, and 51 per cent for college graduation. Thus, while colonial-era provinces - that had both linguistic minority and majority areas - suffered from differences in long-term educational outcomes, the linguistic reorganisation of states seems to have remedied these differences.

The face of education has changed profoundly from the time of the first National Policy on Education in 1968, which proposed the three-language formula (*).  Recent years have seen a growing demand for education in English even among people from rural India. Therefore, the latest T S R Committee report on the New Education Policy, not surprisingly, proposes teaching English in government schools. Moreover, the report also suggests introducing Sanskrit and a number of foreign languages into the school curriculum, an idea which has wide acceptance in Europe where 60.8 per cent of school-going students learn two or more foreign languages apart from their native language.

Research studies in psychology have found that multilingual students have significantly better cognitive and non-cognitive skills, which can prove critical when the school system confronts persistent shortfalls in inputs and quality. Finally, as inter-region migration in India booms, teaching multiple languages might be the ticket to integrating migrant students into their new homes while preserving identity associated with their mother tongues.

As the 1968 National Policy on Education observed, “The energetic development of Indian languages and literature is an essential condition for educational and cultural development. Unless this is done, the creative energies of the people will not be released, standards of education will not improve, knowledge will not spread to the people, and the gulf between the intelligentsia and the masses will remain, if not widen further.”

1. Sir Charles Wood, President of the Board of Control for India, presented to the House of Commons, a comprehensive scheme addressed to Lord Dalhousie for the diffusion of knowledge through the English and vernacular languages in 1854, which came to be known as ‘’Wood’s Despatch”. It recommended among other things, establishing Anglo-vernacular schools throughout the districts, government colleges in important towns, and a University in each of the three Presidencies in India.