Was the Bhakra dam worth it?

Three years of painstaking research has shattered many a myth around the most revered hydropower project in the country. A mere 20 per cent of all cultivable area in Punjab is under the dam's command area. Sudhirendar Sharma reviews the recently released Unravelling Bhakra : Assessing the Temple of Resurgent India.
21 May 2005 -

Sitting leisurely on a wooden stool in front of a large gathering, Prime Minister Jawaharlal Nehru had dedicated to the nation the 740-feet high majestic Bhakra multipurpose hydroelectric project on October 22, 1963. Aimed at ushering an era of agriculture development, Nehru had aptly declared Bhakra 'the temple of modern India'. Not far from the site, politicians resenting the idea were telling the people of undivided Punjab how inert the waters of river Sutlej would be once the project starts extracting 'electricity' out of it! 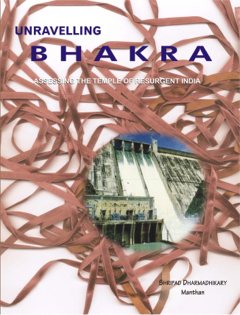 Devoid of scientific reasoning, this first criticism of the project was undoubtedly amusing. However, four decades later and with reams of compelling evidence, criticism is real. Three years of painstaking work has shown that many claims made around the most revered hydropower project in the country were myths. Researched by a team led by Shripad Dharmadhikary, the recently published Unravelling Bhakra : Assessing the Temple of Resurgent India provides disturbing evidence of the hype around Bhakra has been used to justify hydropower development.

Dharmadhikary, formerly of the Narmada Bachao Andolan, is presently the Founder-Director of the Manthan Adhyayan Kendra, Badwani, Madhya Pradesh.

How else can it be that Nehru's penchant for gigantism caught on but his dissenting voice did not? On November 17, 1958 Nehru had remarked at the meeting of the Central Board of Irrigation, "(he) doubted very much if the Government would have initiated such a project if it came before them at this time. Such a dam was exceedingly expensive, involved a considerable amount of foreign exchange and took a long time to be completed. All that India gained from it was electric power and little irrigation."

Indeed, irrigation has been little. The total area under Bhakra's command has been 20 per cent of all cultivable area in Punjab. In real terms, it meant that 372,000 hectares land got covered under irrigation from the Bhakra canal network in the state. However, an analysis of the command area reveals that much of the command area in Punjab was already irrigated, or was in areas well endowed with water. On top of it, the dam helped only 12 per cent of the state's agriculture growth.

Carved out of Punjab in 1966 three years after Bhakra was commissioned, Haryana seems to have gained more from the project. A total area of 1.16 million hectares has been irrigated in the neighbouring state that contributes 15 per cent to its total crop production. Often these are the statistics that are used to not only justify Bhakra but other large dam projects too. The question is: what would have Punjab and Haryana looked like if the Bhakra dam had not been built?

Unravelling Bhakra contends that the twin states would have definitely looked different without 449,000 hectares of waterlogged land and 687,000 hectares of salt-affected area. Curiously, the permanent degradation of cultivable area due to (over) irrigation has been deflected with 'that is the cost of doing it!' But former Union Water Secretary Ramaswamy Iyer has argued against this approach. His view is that between 'doing a project' and 'not doing anything' are a set of alternatives worth considering.

Surprisingly, groundwater irrigation through diesel pumpsets and tubewells has taken a quantum jump following the Bhakra project. From at around 20,000 tubewells in each of the two states during 1965-66, the figure now for Punjab is 910,000 whereas Haryana is not far behind with 583,705 tubewells. Researchers argue that 43-46 per cent of all agricultural production in Punjab is based on unsustainably mined groundwater. For Haryana, the figure is 35 per cent.

Proponents of the Bhakra dam often argue that much of this has been possible due to groundwater recharge through canal seepage. Conversely, however, that doesn't seem to be the case as only 17 per cent of the groundwater recharge can be attributed to canal irrigation in Punjab. For Haryana, researchers have come out with a value of 24 per cent. And much to everybody's surprise the researchers contend that canal irrigation is actually on the decline in both the states.

The book quotes Sardar Gurmail Singh of village Bada in district Ropar: All that you can see around in Punjab (the prosperity) all that you have heard about it, do not believe it. Things are not what they seem. Punjab is on the brink In its report, the S S Johl Committee constituted by the Government of Punjab has acknowledged that indeed the state is on the brink as the land and water situation in the state is fast proving to be economically disastrous, socially untenable and politically unsustainable.

Some 84-development blocks out of 138 have already been declared a dark zone, where the level of groundwater exploitation is over 98 per cent against the critical level of 80 per cent. Six out of the twelve districts in the state have recorded a groundwater utilization rate of over 100 per cent. Consequently, in many parts of Punjab water tables are falling by up to 1 meter per year. Not without reason has the Johl Committee recommended a shift from rice-wheat cropping pattern in the state. This is the backdrop for the book.

Though Unravelling Bhakra brings on table several hidden dimensions of the project, it falls short of making a strong case against it. From displacement to rehabilitation and from land degradation to food insecurity, the study tosses up all the issues relevant for such an assessment. Yet, the 300-pages of data-filled text may not trigger a fresh discourse on the future of hydropower projects in the country. The book fails to challenge some of the emerging arguments on the subject.

The World Bank -- itself a highly scrutinized institution -- has already given a different spin to the entire issue by arguing that the Bhakra project benefited the landless and the poor by generating on-farm employment opportunities, for people as far as in Bihar. It goes further to suggest there has been a return of 32 % on investment in education from irrigated areas, as compared to the un-irrigated areas. In doing so, it advocates the need for increasing irrigation coverage in the country for improving literacy, a compelling poverty reduction goal under the MDGs.

Dr Sudhirendar Sharma is a development analyst attached to the Delhi-based the Ecological Foundation.