Thirty-four years of irregularities and failures

The recently released CAG audit report on Maharashtra has heavily criticized the time and cost overruns in Gosikhurd irrigation project in Vidarbha. Himanshu Upadhyaya analyses the report to list the shortcomings of the project.

The Comptroller and Auditor General of India (CAG) audit report on Maharashtra (Economic Sector) that got tabled in Maharashtra assembly on 28th March has brought to attention the sad state of affairs at Gosikhurd irrigation project of Vidarbha Irrigation Development Corporation (VIDC).

Gosikhurd Irrigation Project also known as Indira Sagar Irrigation Project is one of the major irrigation projects being implemented in Bhandara district of Maharashtra on the river Wainganga in Godavari Basin. The project was launched in 1984 and is still ongoing. It was been declared as National Irrigation Project by Government of India (GoI) in 2009.

The audit states that time and cost overruns coupled with deficient planning in Gosikhurd project resulted in huge cost escalation from Rs 372 crore to Rs 18,495 crore.

As of March 2017, an expenditure of Rs 9,712.09 crore has already been incurred on the project. Auditors underlined their concern that “the target date for completion of project is March 2020 and delay in submission and finalization of funding plan to GoI may hamper the project progress”.

As per the latest costs revisions in November 2017, the cost of the project now stands at Rs 18,494.57. However, CAG auditors added that “sanction of this revised cost estimates was awaited from Central Water Commission for want of viable funding plan”. CAG auditors also underlined that funding for the balance amount of Rs 8,782.47 crore from GoI was not assured. The table below shows details of the project cost escalation:

This performance audit revealed that due to faulty survey, there were overlaps in the irrigable command area, which subsequently led to changes in the scope of the project. Audit scrutiny of the land acquisition process suggested that the works were contracted out without ensuring acquisition of private and forest land leading to inordinate delays and cost overruns.

Earlier performance audit of 2007 had pointed out that 62 percent of land required for the project (24,787 hectares) was not acquired as of March 2007. And the recent CAG’s performance audit found other huge shortcomings as listed below:

Irrigation potential much less than the target

Audit revealed that while granting the environment and forest clearance in February 1988, the Union Ministry of Environment and Forests, now called the Ministry of Environment, Forest and Climate Change (MoEFCC) inserted a binding condition that tree plantation on either side of the canals and roads, foreshore of the reservoir and in the waste land/ vacant land should be carried out. It was observed that provisions for plantations were made in the formal acceptance by the department concerned known as Administrative Approval of the work and Revised Administrative Approval (RAA). However, plantation works amounting to only Rs 1.41 lakh were carried out against the provision of Rs 13.76 crores made in the third RAA.

Audit scrutiny indicted sub-standard execution of works in many components of the project without mincing words. Certain works were not executed as per the approved drawings and designs and still the engineers concerned issued the contractors completion certificates and approved payments. It was found that estimates were not prepared with due diligence resulting in execution of extra items or excess quantities. Manual provisions and contract conditions were violated resulting in grant of undue benefits to contractors. Instances of delayed execution were noticed because of non-acquisition of land, failure to get timely approval of drawings and designs as well as failure to obtain statutory permissions.

Audit scrutiny revealed that the works of cement lining of left bank canal from 1 to 10 KM and from 11 to 22.93 KM were executed through two contacts in August 2009 at the cost of Rs 25.80 crores and Rs 25.69 crores respectively. It was found that due to substandard quality of lining works in the entire canal length, the CC lining developed cracks one to two years after completion. In March 2010, the contractors were directed to carry out rectification work under clause 20 of the contract. This sub-standard work had come to light during CAG audit in the year 2010-11 and was commented on in paragraph 2.3.7.5 of the CAG audit report on Maharashtra (Civil) for the year 2010-11. Discussing the above audit observation, Maharashtra’s Public Accounts Committee report (September 2016) also expressed its displeasure over the poor progress of the lining work.

During audit scrutiny in 2017, it again came to the notice that the rectification work was being carried out at a very slow pace. While it was initially expected to be over by June 2012, time extensions were accorded with revised deadline of March 2018. However, auditors found during field inspections that as of March 2017, reconstruction work was carried out in only 1.2 KM of the canal length (i.e. mere 5 percent). The present status of the work is presented in audit report with photographs: 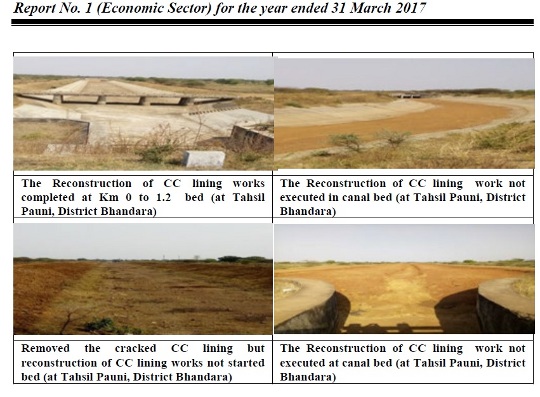 What is even more shocking is that audit scrutiny revealed that despite the knowledge of such sub-standard work carried out by them, the same contractors bagged the contract for two more works pertaining to Right Bank Distributaries (canals branching to the right side of the river) at a cost of Rs 24.84 cores.

Audit also pointed out that the construction of basic civic amenities in 54 rehabilitation villages started in the year 1999 got completed during the period 2000 to 2016. However, due to inordinate delay in handing over the completed civic amenities to Zilla Parishad, these structures deteriorated for want of proper maintenance. This led to an extra expenditure of Rs 49.12 crores on maintenance and repair work of these civic amenities as of August 2017.

Audit scrutiny revealed that out of 11,788 sq. kms of catchment area, Catchment Area treatment (CAT) activities were carried out for only 4261 sq. kms (36 percent) as on March 2017, after lapse of eight years from the completion of the dam.

The previous performance audit report had also noted that as on March 2007 CAT activities were carried out on 2,762.86 hectares of land only. Audit scrutiny of records then had also pointed out that CAT plans submitted in October 2000 were still awaiting approval from MoEFCC as on August 2007.

It was also observed during the scrutiny of records that no records of pre-monsoon and post-monsoon inspection of the dam were maintained.

Water Quality in the Reservoir

Field inspection by the auditors pointed that the release of 250 million litres of sewage water daily in Nag river by Nagpur Municipal Corporation had impacted the water quality in reservoir. Auditors also underlined the instances of mass deaths of aquatic life (May 2009). During the joint visit on 6th March 2017, it was observed that the water in the reservoir had turned black and there was a dense growth of water hyacinth as shown in the photographs below 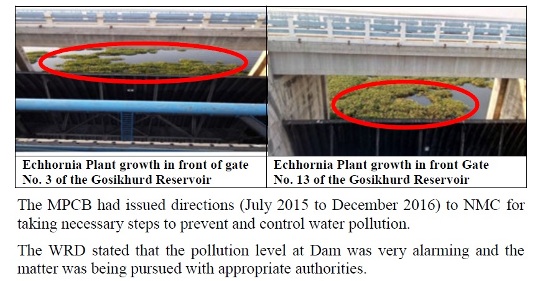 This is yet another performance audit report of an irrigation project from India’s constitutional audit institution and when read along with the previous performance audit that CAG of India carried out in the year 2007, it represents a textbook example of what ails India’s irrigation sector.