By simultaneously carrying out multiple development schemes in a village, can its all-round development be made more sustainable? The Uttam Gram program, in Haryana's Donkhera village, provides some answers. Shashank Devra reports.

For a very long time, development professionals, governments and the public in rural areas have hoped to see multiple initiatives undertaken simultaneously. Only this could provide sustained development. And if these are carried out by village development committees and gram panchayats themselves, that would be ideal. Realising this in practice, however, has been very difficult. Uttam Gram is an initiative of the S M Sehgal Foundation to create demonstration villages that can be models of such integrated development.

Donkhera is a village of 2800 residents in Mahendragarh district, Haryana. Here, development activities in agriculture development, water management, and local participation were undertaken together over a two-year span (2018–2020), through a village development committee. The experience of this village during and after this period provides a lot of hope, not only to continue the interventions here, but also for transplanting the learnings from this effort in other places.

The village is in a dark zone for water availability. Groundwater has largely been exhausted, with availability limited to the monsoon and a couple of months beyond. Without this vital input, however, many other efforts could not succeed. Therefore, water-saving interventions in agriculture were undertaken on 100 acres, with laser leveling, and subsequent installation of thirteen mini-sprinklers and five drip irrigation systems, which led to a water savings of nearly 106 million liters. In addition, farmers were trained to adopt these interventions through government schemes for agricultural support.

Water availability was also increased by creating a new pond in the common lands of the village. The villagers themselves selected a site for the pond. They also built the consensus needed to remove encroachments from the chosen location. One pond with 4.62 million liters of water storage capacity was constructed by the foundation, at a cost of a little less than Rs.2 lakhs. And after the very first year of rainfall, the villagers reported water levels in nearby wells had risen by 30 feet - a potentially permanent value to many cultivators. Seeing the impact, the villagers are persuading the gram panchayat to construct more ponds in the village.

Along with reliable water supply, it was also important to improve soil health. Over many decades, repeated use of chemical inputs - urea and DAP - had degraded the soil, and initial gains in yield quickly became unsustainable. Farmers knew and understood this, but needed information and inputs for alternatives. The distribution of 180 packages of practices on wheat, mustard, and millet cultivation helped farmers decide to use micronutrients as inputs instead. Their testimonials show that the average crop yields increased by nearly 10-12 per cent, and at the same time the process of restoring soil health also began.

Rajesh Kumar, a dynamic young man from the village with an engineering degree has taken up agriculture as a profession. This is quite unusual in rural areas, which have witnessed an exodus of young people from their homes and traditional livelihoods. Rajesh has been leading a programme in the village known as the Farmer Field School (FFS), in which a farmer's field is developed as a model for demonstration of new technologies, seeds, leveraging government schemes, and diversified farming practices. In his FFS, Rajesh has a demo of a poly house nursery, drip irrigation, fencing, seed trays, stacking, and mulching. He has shifted from wheat, mustard, and millet to vegetable cultivation focusing on tomato, onion, bottle gourd, and carrot. He has also installed a solar water pump of Rs 3.50 lakh with the help of a government subsidy. 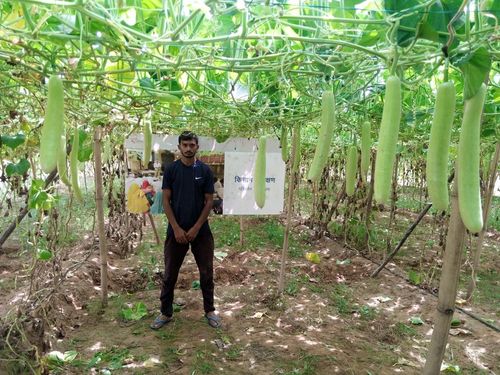 And the result? Rajesh increased his income three-fold by shifting to diversified agriculture. Nearly twenty farmers from nearby districts visit his FFS every day, and fifteen farmers from nearby villages have adopted the model of FFS. The income of these families too has increased substantially, and they also provide employment to local laborers who work on their FFS. In the local economy, a lot of the commerce is among the residents themselves, and the success of some has the potential to improve the lives of others too.

The women of the village rear goats; they have been doing this as a way to generate additional income. In order to motivate more women to take up goatery as a business enterprise, goats were given to thirty women. Eight goat shelters, each measuring 10 square feet and made of bamboo, were put up. This helped the women maintain better sanitation for their animals and also care for them better, thereby reducing their mortality - which is their biggest risk of losses. In addition, a local government veterinary doctor has been linked up with the families, so that they can have health services for their goats.

Ompati Devi, a woman who participated in the initiative and reared goats, says, "I usually stayed at home, or went for daily wage work when available. I got five goats through this scheme. The biggest benefit I believe is the milk we drink. Now our kids are healthier and less likely to be affected by disease. I also earned Rs.20,000 by selling the male offspring of the goats. I now have a total of fifteen goats from which I will earn more." Goatery interventions have enhanced the income of nearly thirty families of the village.

Learning to work together, for common benefit

The VDC met once a month to discuss the results of development initiatives and ways to take it forward. In the VDC meeting, the shortage of drinking water in the ward of the deprived communities was discussed, and the gram panchayat agreed to connect government water lines to a community water tank, which would supply water to 175 households. The community water tank with a capacity of 25,000 liters was also constructed by the foundation. The villagers also benefited from smaller initiatives such as soak pits for wastewater disposal, sanitation drives, and renovation of a local Integrated Child Development Services center.

Each of the interventions in the village that were supported by the foundation made a specific impact. But doing all of them at the same time was important - the multiplier effect of the many initiatives helped the villagers themselves believe they can do more. Some challenges such as alcoholism, patriarchy, division of communities into social and political lines, and inability of gram panchayats to get funds for infrastructure development will continue to slow the pace of social and economic progress of the village. However, development initiatives have certainly influenced the mindset of communities to think afresh for bringing positive change to their lives.

Shashank Devra is Program Lead for Participation and Sustainability at the S M Sehgal Foundation.