A program to teach gender-equality

In Haryana, which has one of the lowest child sex ratios in the country, researchers have been conducting a longitudinal study on a program to improve gender attitudes among school children. Five years after the intervention, are its positive impacts still sustained? Tarun Jain writes.

Despite rapid economic growth and social transformation in India in recent years, women and girls continue to lag behind men and boys in many domains. The most striking statistic is that the child sex ratio in 2018 was 899 girls for every 1000 boys, indicating differences in basic survival. Among adults, the labor force participation rate of women in India is 23 per cent (and declining) compared to over 80 per cent for men. Not just a phenomena specific to rural areas or among the less educated, gender imbalances manifest themselves even in business schools and among the management ranks of top firms!

This suggests that economic development alone seems unlikely to achieve gender equality, as many gender gaps persist despite economic progress. Underlying this gender inequality are regressive attitudes about gender roles and about the importance of equal opportunities. For instance, surveys reveal that while many support equal educational opportunities for boys and girls, they simultaneously argue that "women should be less educated than the men they marry", suggesting that social attitudes rather than ability or ambition constrain women's advancement. Other views on appropriate gender roles, marriage customs, employment and fertility behavior also seem to be rooted in cultural norms.

Changing deep-seated social attitudes is a challenge, especially since adults tend to be remarkably resistant to changing their views. However, there is evidence that reshaping attitudes in a more pro-social was possible - the election of a large number of female panchayat leaders after the 73rd Amendment to India's Constitution improved perceptions of the effectiveness of female leaders and weakened stereotypes about women's roles in the public and domestic spheres.

In another domain, the expansion of cable TV in India, programs depicting more assertive female characters led to significant decreases in acceptance of son preference and violence against women while increasing reported women's autonomy and decreases in fertility. In Africa, MTV’s popular Shuga series which featured educational storylines on topics such as HIV/AIDS improved viewers’ knowledge and attitudes, increased HIV testing, and among women, led to fewer sexually transmitted infections.

Would a more direct approach to change gender attitudes work, specifically targeting adolescents? Research in psychology suggests there might be a window in the teenage years when adolescents are both curious about the opposite gender, as well as open to changing their attitudes on social and economic roles of women vis-à-vis men. Another advantage of targeting adolescents is that gender-equal attitudes get baked in, possibly leading to more egalitarian behavior through adulthood. Implementing the approach through government schools is a practical way to counter the influences of parents and the community.

With this idea in mind, we collaborated with the Government of Haryana and Breakthrough, a human rights NGO based in Delhi to design and implement a curriculum to change gender attitudes. This was done in secondary schools in four districts of the state (Sonepat, Panipat, Rohtak and Jhajjar, which in 2012 had some of the most skewed sex ratios in the state). A key aspect of the design was longitudinal data collection - we tracked and surveyed the same student before and immediately after the program ended, and then two and half years after the end of the program. 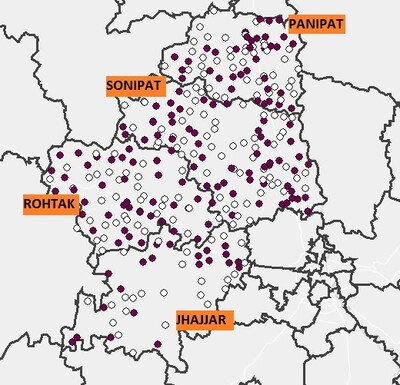 Picture: In addition to the schools selected for the program, a second set of schools was used as a comparison set.

The program, called Taaron ki Toli, was implemented with 7th, 8th and 9th grades, and lasted two and a half years from April 2014 to September 2016. It was led by the NGO's own facilitators working within the schools. The sessions included discussions on a social norm (e.g. women should cook) and questioning it (Why? Men cook in restaurants). In one exercise, boys and girls were asked to write down what they want to do when they grow up. A subsequent discussion helps boys to learn that girls have similar aspirations as they do, and helps girls realize that boys have similar goals as they do.

The program included a strong component of communication skills, since teenagers need to negotiate their views with parents at home. Apart from discussions, participants wrote street plays on topics such as street harassment and played sports like kho kho with participation from both genders. Breakthrough's approach included comics and cartoons so that participants absorb messages in an easy way. The program made both a human rights case, as well as a pragmatic economic case for women's empowerment. I wish I'd had a program like this in my school days!

The program resulted in big changes in gender attitudes right after program ended, which persisted for at least three years. Quantitatively, the program had a 16 per cent persuasion rate, which means that participants changed 16 per cent of their gender-regressive views to equality-oriented ones. The attitude changes were similar for both girls and boys, but with substantial differences in behavioral changes (such as interactions with the opposite gender, doing domestic chores for boys and going out to the market for girls). Girls reported about half the behavioral change compared to boys, pointing to greater barriers faced by girls in translating their gender-equal attitudes into behavior change.

There was a negligible impact on aspirations associated with education and employment, partly because these were very high to begin with. What is reassuring is that the program had no negative impact on academic performance, implying that participating in the program did not take away from study time. Following up with the respondents two and a half years after the program ended, it was found that the effects on both attitude and behavior persisted, suggesting the durability of the intervention's impact in reshaping participants' thinking.

One lesson from this exercise is that targeting men and boys in gender-equality interventions is important, since they often have more agency in actually translating their views into change on the ground. This is in contrast to many "female empowerment programs" that primarily target women and do not include men. In the context of the Haryana program, will the biggest beneficiaries be future wives of these boys?

Picture: Breakthrough's approach included comics and cartoons so that participants absorb messages in an easy way.

This experiment corroborated what researchers have been observing in many other contexts about the promise of early life attitude change in alleviating discrimination. One possible implementation could be innovation in how these programs are delivered in future - maybe via smartphones, involving gamification and leveraging the power of social networks. Another possibility is the essential program elements could get incorporated into standard curricula, part of the usual textbooks and taught by regular schoolteachers. This is an open space for innovation and adoption by large scale school systems in both the public and private sectors.

Five years after the program ended, we continue to track participants as they enter adulthood, with some already married. Will they still have the gender-equal views and opinions they expressed at the end of the program? How many years did women, both the female participants as well as the wives of men who participated much as men, study after we last saw them in tenth grade? Did they get jobs or enter college? What age did they get married and have children? Finally, do they perceive more control and satisfaction over their lives? I am optimistic about the possibility of these youth programs in creating long lasting social change!

Tarun Jain is Associate Professor at the Indian Institute of Management, Ahmedabad. More details of the study described in this article are available in Diva Dhar, Tarun Jain and Seema Jayachandran (2020): Reshaping Adolescents' Gender Attitudes: Evidence from a School-Based Experiment in India, NBER Working Paper No 25331.