The gender bar-rier in the courts

The higher judiciary has very few women. While the low percentage is acknowledged to be a problem by the judiciary itself, there has been no serious effort to correct this. A concerted effort to overcome the hurdles is needed to make the courts more representative. Shikha Sharma reports.

In 1959, Anna Chandy became India's first female judge of a High Court. Many hoped her elevation would herald a new phase for India's largely male higher judiciary, and create more space for women in it. Unfortunately, things didn't turn out that way. It would take another 30 years for a woman - Justice Fathima Devi -  to become a Supreme Court judge in 1989. And since then, only seven women have been appointed as judges of the apex court. No woman has served as the Chief Justice of India.

What's more, there is no chance of a woman becoming the CJI until 2027. With Justice R Banumathi retiring and Justice Indu Malhotra’s superannuation, the Supreme Court presently has just one woman judge out of 27. Of the 245 judges who have made it to India's highest court, including the current judges, less than four per cent have been women. The situation is no better in the High Courts. Out of 25 High courts, just one High Court presently has a Women Chief Justice. Across the courts, there are only 82 women judges out of the total 1,079 judges. There is no woman judge in the Patna, Meghalaya, Manipur, Tripura and Uttarakhand high courts.

In the country's lower courts, less than 28 per cent of judges are women, and the number decreases steadily as one moves up to higher levels of the judiciary, according to a 2018 study done by Vidhi Centre for Legal Policy. For example, between 2007 to 2017, 36.45 per cent of judges and magistrates in 17 Indian states were women. In comparison, just 11.75 per cent women joined as district judges through direct recruitment over the same period, data from 13 states shows. "A stark picture emerges of the abysmal representation of women in the lower judiciary, and we see a nearly uniform trend of the proportion of women judges decreasing as one moves up levels of lower courts," the study concludes.

Interestingly, there seems to be no shortage of women entering the legal profession. Women comprised 44 per cent of candidates who qualified in the 2019 Common Law Admission Test for National Law Universities.

The simplest argument for the need to have more women in judiciary is justice itself. This is widely acknowledged, but at the same time the justice system suffers from a textbook case of a leaky pipeline, a term used to describe the way women are forced to leave their careers midway, leading to only a few of them emerging at the top. A multitude of reasons - both systemic and cultural - have contributed to this, and consequently to the gender gap in Indian judiciary. One of the most  glaring ones are the rules of appointment for judges.

In places where the appointments are done on merit - as in lower judiciary where recruitment for civil judges (junior division) happens through an exam - women fare well, and we see comparatively higher representation in this tier. However, as soon as the rules start favoring a system of appointment based on recommendations, women start struggling to rise.

Appointments to high courts are initiated by the Chief Justice of the High Court, along with the two senior-most judges of that court. This is finally affirmed by the Supreme Court collegium consisting of the three senior-most judges of the Supreme Court. Women are, however, largely absent from these decision-making groups. Analysis of recommendations from the High Court collegiums by Fulbright scholar Rangin Pallav Tripathi not only reveals this, but also conclusively points at how male-dominated collegiums largely tend to recommend a higher proportion of males - who then head the same collegiums as they attain seniority making the absence of women judges a self-perpetuating cycle. 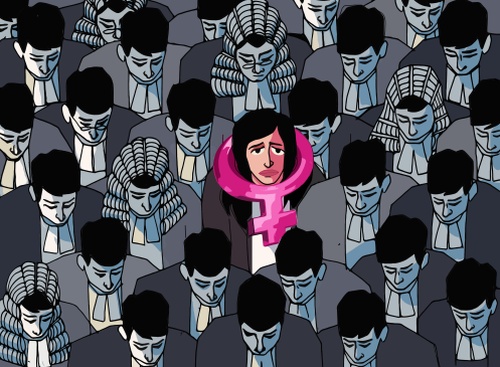 For example, currently, just seven of the 25 High Courts have women as one of the three senior-most judges. Tripathi's analysis of recommendations made by High court collegiums between October 2017 and April 2019 show that 87.63 per cent of recommendations from the high court collegiums were of men. In the period selected for the study, only the High Courts of Madras, Gauhati, Jharkhand and Chhattisgarh included at least 20 per cent women in their recommendation to judgeship at their respective courts. In most states, the percentage was well below 10 per cent. The proportion of women in recommendations accepted by the Supreme Court collegium, which also did not have a woman member, is similar at around 12 per cent.

Direct recruitment from the bar, which is another way women lawyers can become judges, is also impeded by eligibility criteria that doesn't take into consideration differential familial expectations from women. To be eligible to judge requires several years of continuous practice from an advocate - a criteria many women are unable to fulfill due to intervening social responsibilities of marriage and motherhood, thus eliminating them from the pool. This explains why only 11.75 per cent women were recruited for the position in 10 years across 13 states.

Apart from this, other factors include a disproportionately low number of women lawyers in the top tiers and the challenges they face on entering litigation. For example, data analysis of the gender composition of the three tiers of lower judiciary done by Vidhi Centre of Legal policy shows a near-uniform trend of the proportion of women judges decreasing as one moves up the tiers of the lower judiciary, thus reducing the pool of women who can be elevated from the bar to the bench.

This not only impacts women’s rise through the lower judiciary, but also their elevation to the High Courts and the Supreme Court. For example, as per a submission made by Attorney General K K Venugopal, the Supreme Court has just 17 women senior advocates, compared to 403 men. In the Delhi High Court, there are only eight women designated as seniors while there are 229 men,  and in the Bombay High Court, there are 157 male senior advocates and only six women senior lawyers. When the number of designated senior women lawyers is disproportionately low, the chances of more women becoming judges also remain minimal.

Casual sexism at the workplace, inflexible working hours, and a toxic work environment makes Indian courtrooms an entrenched 'old boys club' that women find hard to break into. Several prominent women lawyers, ranging from Indira Jaising to Meenakshi Arora, have spoken up about discrimination that women litigators encounter. Sexual harassment and the lack of supportive infrastructure, from toilets to  creches to maternity leave, also contribute to a high attrition rate amongst women lawyers, with many preferring to join the corporate sector instead.

Lack of women's representation in the house of law has been an oft-cited concern. While members of the higher judiciary have acknowledged the problem, no serious attempt or reform has been made by either the government or the judiciary during the past 70 years to rectify it. Yet, this is an issue that requires fixing, not just to address the representation deficit, but also because the equitable presence of women in courts is fundamental to the conception of justice.

Inadequate representation of women not only aggravates biases in courts, but can also raise questions on the courts' legitimacy as representative of the societies they serve. With more women in courts, gender discrimination and bias would likely reduce. A gender bias-free bench could boost public confidence in the judiciary, and also ensure justice for the most vulnerable sections of society. The presence of more women judges from diverse backgrounds can also improve the quality of decision making - drawing upon a wider set of life experiences that are now not available to judges - as well as encourage more women to approach the justice system to report violence and crimes.

The relatively low attention that gender diversity receives vis-a-vis the judiciary is also due to the lack of systematic, regularly collected data on it. And so one of the first steps in addressing key issues associated with it is to encouragement compilation of basic data on it. To be sure, the data by itself cannot yield appropriate reform suggestions, but may be useful to undertake other forms of analysis that may help.

Reservations have been touted as another way to bring in more gender diversity, with some states having instituted a reservation policy in the lower judiciary to institute more female judges. Such quotas have had a positive impact in some cases. The recruitment of women judges in Rajasthan, for example, has risen from 15 per cent in 2008 to 60 per cent in 2016. But in other states, like Chhattisgarh, there has not been an increase in representation despite the quotas.

While reservation may be one of the ways that could help women's entry, it cannot be the only one. With studies showing that the establishment of the collegium system has had no meaningful change in the likelihood of more female appointments to higher courts, it is evident that we need to either look at ways to make the system of recruitment more transparent and inclusive, or look beyond it for solutions.

Relaxing eligibility criteria for women as well as having more female appointments, especially in the higher courts, creating affirmative action plans that prioritize adequate numbers of women candidates as well as  having gender sensitization training for judges and lawyers alike, could be some ways that could be instrumental in breaking gender stereotypes and changing perceptions of gender roles in the judiciary.

As was recently pointed out in the Supreme Court,  the disproportionate domination of men in the judiciary and patriarchal injustice have a direct correlation. As more and more women step out into public spaces, the battle for equal rights will happen as much as in the courtrooms, as in homes. In these battles, it’s imperative that the courts do right by our women. Anything less would go against the grain of equity and justice.

Shikha Sharma is a freelance journalist and photographer; she writes about policy, culture and social justice issues across a number of topics, including women's rights. This article is made possible through reader support for India Together's development journalism fellowships.

Vidhi Centre For Legal Policy:Tilting the scale: Gender imbalance in the lower judiciary

Cornell Law School research paper No. 19-26: From Executive Appointment to the Collegium System: The Impact on Diversity in the Indian Supreme Court

Economic & Political Weekly: Breaking through the old boys club: The rise of women in the lower judiciary

ILI Law Review Vol. II:Representative judiciary in India: An argument for gender diversity in the appointment of judges in the Supreme Court

International Journal of Policy Sciences and Law (IJPSL) Volume 1, Issue 3:Ramifications of the dearth of female representation in Indian judiciary

Moneycontrol: Why are there so few women justices in our male dominated collegiums?

TIGER SANCTUARY : Are tigers back at the Buxa reserve?
MORE ARTICLES
on similar topics ...
GENDER AND LEADERSHIP