Regional benches of the Supreme Court?

Should the appellate jurisdiction of the apex court be distributed across the country and made more accessible to the people? Or would that carry risks of increased litigation, and lead to more inconsistencies between judgments? Pooja Murty lists the pros and cons.

Rajya Sabha member and Senior Advocate P Wilson wrote to Union Law Minister R S Prasad a few months ago, urging the Government to introduce a bill so that Article 130 of the Constitution can be amended to provide for permanent regional Benches of the Supreme Court at New Delhi, Mumbai, Chennai and Kolkata. This is not the first instance where the solution to remedy the Supreme Court’s constantly escalating docket has been to increase the number of judges and create regional benches. In 1956, the size of the Supreme Court was increased from its original 8 to 11; in 1960, from 11 to 14; in 1977, from 14 to 17; in 1986, from 17 to 26; and in 2008, from 26 to 31.

However, analysis has suggested that merely increasing the number of judges will not affect the overall rate of disposal. The time taken per hearing will simply be adjusted (read: increased) as a result of the influx of new judges. What has constantly been overlooked are the structural issues associated with the problem of pendency in the Supreme Court.

What does the Court spend the most time on?

The first issue is the broad jurisdiction of the Supreme Court – it acts as a court of original jurisdiction on matters relating to fundamental rights, but is also the final court of appeals in India. While the Supreme Court was to act as the highest Constitutional court in the country, a majority of its time is now spent adjudicating appeals from subordinate courts and tribunals (with the maximum appeals coming from High Courts), in exercise of its special leave jurisdiction. This special leave jurisdiction was originally intended to be invoked only in exceptional circumstances. 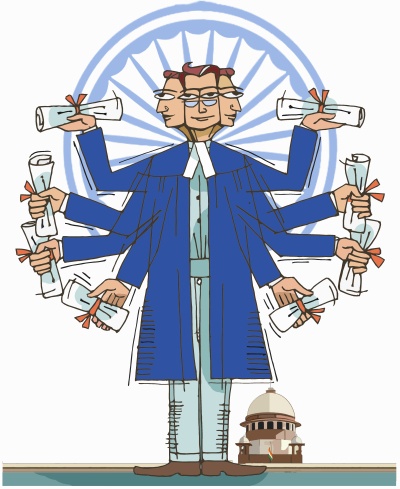 Who goes to the Supreme Court?

Another important observation that came out of the study was the correlation between geographical proximity to the Supreme Court and appeal rate. It is not surprising that the among the appeals from High Courts, appeals from the High Court of Punjab and Haryana comprised a large portion of the total appeals, with no appeals from the High Courts of the North East. Moreover, these appeals formed 90 percent of the output of two-judge benches. The decisions of five-judge benches were primarily restricted to matters relating to the original jurisdiction of the Supreme Court.

Additionally, those with the means to reach the Supreme Court (such as the government) were also more likely to appeal to the Supreme Court. The cost of engaging a senior advocate will also need to be considered while calculating the total cost of appeal.

The Law Commission also recommended the setting up of a Constitution Bench at Delhi to manage constitutional and other related issues. This would aid in clearing the backlog of cases before the Supreme Court, while also allowing the Supreme Court to dedicate its time adjudicating matters of national importance and relating to important constitutional issues. This suggestion was also in the interest of litigants living in places distant from Delhi, whose right to justice as guaranteed under the Constitution, was being adversely affected.

In 2019, Vice President Venkaiah Naidu, strongly advocated in favour of the establishment of regional benches, a move he believed would bring the judiciary closer to the people. This way, litigants could also avoid bearing the expenses of travelling to Delhi.  In essence, justice is made more accessible.

Accessibility, however, can be a double edged sword. While the constitution of regional benches can make delivery of justice more efficient, it can also increase the volume of litigation. Taking the example of the Supreme Court itself, a study conducted demonstrated that the transformation in the workload of the Supreme Court, one of the world’s most accessible superior courts, was solely attributed to access. If regional benches become a reality, the ensuing proliferation in the volume of litigation cannot be avoided. With reduced costs involved in the litigation process and easier access, the introduction of regional benches could worsen the pendency.

Because of its immense caseload, another problem that the Supreme Court is grappling with is the problem of inconsistency in judgments. As the highest judicial authority in the country, the Supreme Court has an obligation to deliver judgments which provide certainty on a specific legal matter. However, as previously mentioned, a majority of the cases that come before the Supreme Court are decided by two-judge, or three-judge benches. These benches have been frequently disregarding established precedent, and contributing to a growing body of conflicting precedent.

In other jurisdictions, lawyers, based on their knowledge of precedent (which is strictly followed), commonly advise clients on whether their case would be successful before courts. In India, however, this body of contradicting precedent is encouraging more and more parties to litigate than to settle out of court. This has created a vicious cycle: the large docket of the Supreme Court prevents overworked judges from spending sufficient time to carefully consider cases, leading to a corpus of illogical judgements and unsettled law, and in turn leading to more and more cases being filed before the Supreme Court.

The addition of regional benches could aggravate the issue. With more benches in different regions, there will be more litigation, and in turn, the risk of a larger body of changing legal principles. In 2010, the Supreme Court itself had rejected the demand for regional benches, believing it would impair the unitary character of the country. However, in light of its ever-escalating docket and other allied concerns, it may be time to weigh these pros and cons, and decide on a course of action that will ease the caseload and bring greater attention to weighty Constitutional questions.

Pooja Murty
10 May 2021
Pooja Murty graduated from NALSAR University of Law in 2016 and is currently pursuing a Masters in Development Studies at the University of Melbourne. This article was originally published as a blog post at Daksh, where she worked as consultant.