While urban finances do need to be strengthened, adequate expenditure alone is not enough to improve public services and other outcomes. A study of waste management in 27 cities shows the importance of other non-monetary influences.

India is steadily urbanising; this is a trend that has been evident for decades. Globally, increasing urbanisation is characterised by the workforce moving away from agriculture to non-agriculture jobs and people moving away from villages to cities in pursuit of better livelihoods. In India too, urbanisation in India has followed this standard script. But the same may not be true with respect to how much value India has derived from this rural-urban shift.

The urban share of Net Domestic Product (NDP) was 38 per cent in 1971, which grew steadily to 52 per cent by 2000. However, from 2000 to 2012, the urban share of NDP has remained constant at 52 per cent. Since the urban population has increased steadily from 2000 to 2011, the constant urban share of NDP implies that per capita urban NDP growth has been lower than rural growth during this time period. This may be an indication that urban centres are not able to create enough high productive jobs and/or not allowing existing inhabitants to increase their productivity fast enough. Rural areas, meanwhile, are seeing increasing growth in manufacturing, which steadily increased from 26 per cent of overall manufacturing in 1971 to 51 per cent by 2012.

Low and deteriorating levels of basic civic services could be one of the reasons for lower productivity growth in urban areas compared to the countryside in the more recent years. In an ideal scenario, 100 per cent of the solid waste generated must be collected. For Indian cities, currently only 78 per cent of solid waste is collected. Poor service delivery is not only a problem pertaining to SWM. The acceptable level of water supply should be between 135-150 litres per capita per day in an urban setting; at present, Indian cities provide about 70 litres per capita per day. This hampers their ability to create gainful employment for a large share of the population and provide services necessary for a dignified human life.

A low level of service delivery is not a fait accompli for a lower-middle-income country such as India. In 2011, a government-appointed High Powered Expert Committee (HPEC) had noted that "the state of urban service delivery in India’s cities and towns is far poorer than is desirable for India’s current income levels."

Improvements in planning, governance and funding, coupled with innovative practices and use of technology as the key building blocks to improve service delivery . While efforts have been made to improve on these, implementation remains woefully inadequate and largely on paper. For example, the 73rd and 74th Constitutional Amendment Acts of 1992, which recognised panchayats and urban local bodies (ULB) as the third tier of government, was a step in the right direction. However, nothing much has changed on this front over the last 20-30 years. "Key problems in urban governance include weak legal and institutional framework within which the ULBs operate and their poor capacity including lack of professional and sensitised cadre, to perform their development and regulatory functions".

Likewise, the 15th Finance Commission report for 2020-21 recommended that 4.31 per cent of the divisible revenue pool should be allocated to local bodies, up from 3.54 per cent in 2019-20. Despite this higher provision, ULBs are largely dependent on Central and State grants which constrain their ability to invest in infrastructure and improve quality of service delivery. Municipal tax revenue as a share of Gross Domestic Product (GDP) has declined from 0.3 per cent to 0.25 per cent between 2010 and 2018. During the same period, the combined tax revenue of Centre and states as a share of GDP has increased from 16 to 18 per cent.

Estimates suggest that India needs to spend six to eight times more per capita on urban infrastructure, every year, for the next 15-20 years to be able to provide acceptable levels of service delivery across key urban services. Around 80 per cent of this estimated spend is required to build capital-intensive urban infrastructure like affordable housing, mass rapid transit systems like metro network and more roads and relatively little is needed to provide services like solid waste management, which keep cities clean, but are not capital intensive.

How much does expenditure matter?

Since capital intensive urban infrastructure in most Indian cities is not financed by the urban local bodies anyway, it begs the question, is lack of funding really the primary reason Indian cities are not able to provide acceptable levels of services such as SWM. Furthermore, is it true that higher the spending on SWM, better the service delivery? At the Centre for Social and Economic Progress, these questions were probed by comparing revenue expenditure from 27 cities on SWM services, relative to what they ought to spend to provide acceptable levels of service delivery, with their current performance on cleanliness.

SWM was an appropriate focus for such a study, we felt, because it is a basic service provided by all municipalities provide, unlike other services where the state and city work together which might disturb the link between expenditure and performance. Also, both inputs and outcomes were measurable in the case of SWM. Expenditure on waste management is often contained within municipal budgets, or can be estimated by other means despite some variations and difficulties. For outcomes, we looked to the Ministry of Housing and Urban Affairs' annual cleanliness survey, Swachh Survekshan. Two-thirds of this survey's evaluation pertains to outcomes in SWM. The research also referred to benchmarks for per-capita O&M expenditure for cities of different population sizes that the HEPC recommended in 2011, and we could use this as a reference point for what cities should be spending.

The findings from our research are counter-intuitive. The most striking observation is that lack of funding is not a binding constraint in every city to deliver acceptable levels of SWM services. Nineteen out of 27 cities spend more than the required amount , yet none has a perfect cleanliness score. Nine out of these 19 spend at least 1.5 times more than the benchmark amount. Also, while expenditure does help boost performance, it explains only 23 per cent of the variation in performance, indicating the importance of other considerations. 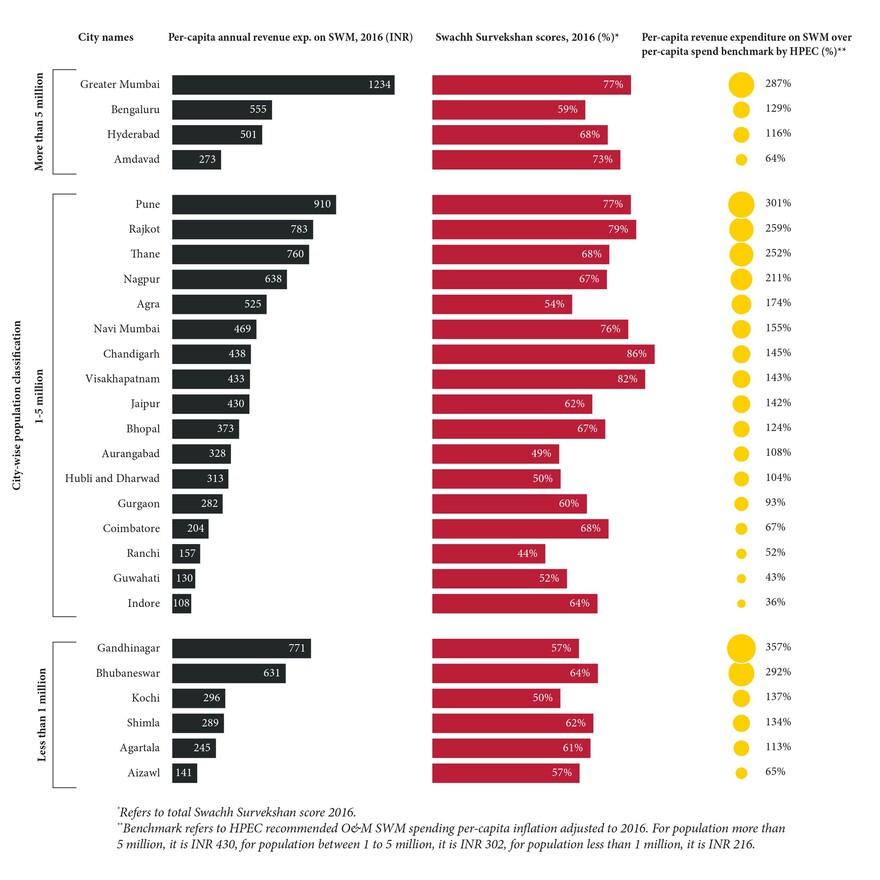 What are these other factors? Our analysis points to three possible non-monetary influences that explain how cities perform on SWM. It's quite likely, we believe, that these factors could be playing an important part in other aspects of urban governance too.

1. Stable city leadership - Municipal commissioners and mayors who have been in position for a long period are more able to improve the service delivery. In top-performing Indore, both the mayor and the commissioner of the municipal corporation held their positions for long stints since 2015. In Ghaziabad, the mayor has been in position since 2017; it has been consistently improving its performance and entered the list of top 20 cities in the latest survey.

2. Citizens' involvement - Cities which have achieved better SWM results have also been successful in involving their citizens in the process. Nawanshahr in Punjab started a massive behavioural change campaign in September 2017, which was a decentralised and cost-effective approach to SWM with the participation of community members. Within a year, they achieved 100% source segregation, and the city has become almost bin-less, transforming Nawanshahr into the number one ULB in the North Zone in the 2020 SS survey.

3. Public-private partnerships – Better-performing cities allow for division of responsibilities between municipalities and the private sector, thereby improving service delivery. Effective Public Private Partnership (PPP) has played a big role in Amdavad's performance on SWM. While waste collection and transport to dumping sites is carried out by private contractors in many cities, Amdavad went further than this, and instituted PPP at three other levels: construction and demolition waste management, composting of flower waste, and material recovery.

Governance has been the weakest and the most crucial link where improvement is necessary to support the urban transformation in India. "Without this, additional capital investments in urban infrastructure will not result in improvements in service delivery", the HPEC had noted in its 2011 report. Our study on spend and outcomes on SWM and early observations on potential non-monetary factors points in the same direction.

Shishir Gupta is a Senior Fellow & Chief Operationg Officer at the Centre for Social and Economic Progress. His colleague Rishita Sachdeva is a research analyst. This article is extracted and adapted from a recent working paper by CSEP, titled "Revisiting the role of funding: Lessons from expenditure and performance on cleanliness in Indian cities".

CHANGEMAKERS : A fuller picture of ourselves
MORE ARTICLES
on similar topics ...
CITIES