How much longer can coal transport continue to subsidise passenger fares? In a changing landscape for power production and transmission, Indian Railways and the Government will need to make new choices, says a new research report published by Brookings India.
28 July 2018 -

Most of India's coal reserves are located in the eastern states, whereas the consumption of coal occurs across the country. As a result, the efficiency and economics of its transportation are quite important. And no one feels this importance more acutely than Indian Railways (IR). For the rail network, coal is the largest and most important freight commodity, in terms of both volume and revenue. Coal transport provides 44 per cent of IR's freight revenues, and an even higher share of its profits. The relationship between coal and IR is significant enough that a senior Railways officer is deputed to Coal India Limited (CIL), and CIL members work closely with the traffic division of railways.

But coal is more than a good source of income for IR; it is also the backbone of the cross-subsidy provided to passenger travel. A recent report by Brookings India examining the sustainability of the relationship between coal and Indian Railways points out that IR "explicitly overprices coal freight by about 31 per cent to offset its losses on passenger revenues." Although passenger volumes on a shared network are rising, the report notes that "India has the lowest ratio of passenger fares and freight charges - of 0.24, compared with several other countries. This conscious policy choice to keep passenger fares low results in freight overpaying its share."

And with coal bearing the biggest portion of this bill, the cost of electricity generated by thermal power plants from coal is about 10 paise per kWh higher than it would otherwise be. 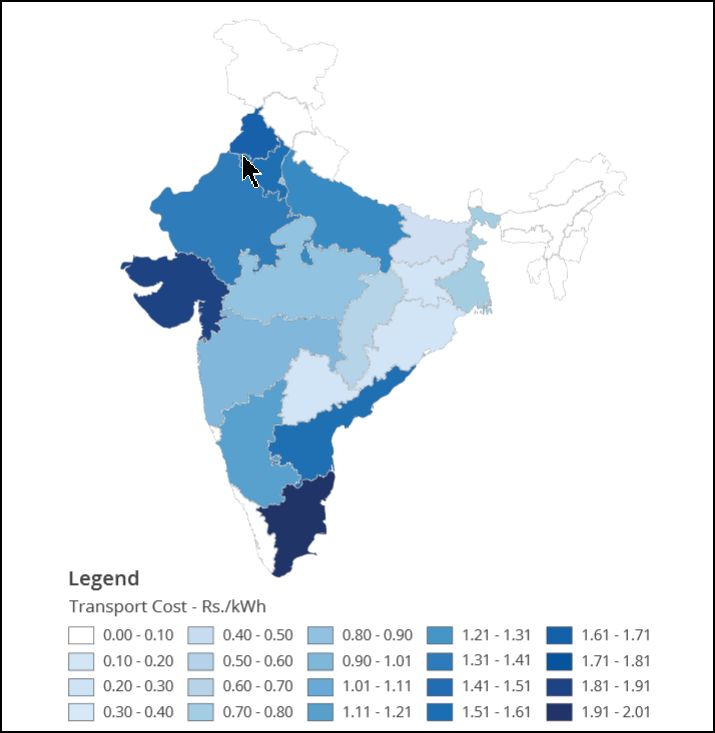 State-wise indicative range of per kWh transportation cost, 2016-17.
States in white either have no coal-based plants or rail transport of coal.
(Picture Credit : Brookings India report)

Now, the report notes, this arrangement is running into strong winds blowing against it. The rate of growth in the demand for coal is falling, and the share of renewable energy (RE) is rising. And what's particularly important to IR is that renewables are growing fastest in the states that are located farthest from the coal deposits, and could therefore rapidly reduce the number of kilometers that IR transports coal. Transporting power over the grid is also becoming cheaper, as high voltage DC transmission gets more efficient, many future power plants are proposed to be set up near the mines themselves. Rail-based transport of coal to these will be minimal, and will add to the challenge of maintaining subsidies for passengers.

The net result of all this, the report cautions, is that it would be very difficult to keep the railways solvent by ever-rising costs imposed on coal transport. At current rates of growth in fares as well as freight charges on coal, by 2030, the overpayment to IR for coal transport would result in power production costs being higher by 18 paise per kWh, 80% higher than today's burden.

Some evidence of how coal producers might respond to this rising cost is already available. IR's average distance of coal transported to thermal power plants dropped 30 per cent in the past five years, impacting revenues. This happened for a couple of reasons: 1) a one-time effort towards coal linkage rationalisation and 2) falling power plant load factors. To maintain total revenue, IR coal freight charges grew more than four times faster than the wholesale inflation rate during FY 2012-17. With that kind of trend, even coastal power plants designed for coal imported from other countries at higher prices would produce power more cheaply than those fed by coal transported by rail.

Given this reality, it should surprise no one if customers attempt to move to alternatives such as renewable energy, over-the-wire options, or even other modes of transporting coal.

This report also makes brief mention of something that others have pointed out in the past - namely, the opaqueness of IR's accounting system when it comes to attributing costs. Expenses that are incurred either entirely or significantly to serve passengers are not clearly separated in IR's accounts, with the result that freight bears a lot of costs that ideally should be borne by passengers. The National Transport Development Policy Committee was the most recent of these; it urged reforms of accounting in its 2014 recommendations to the government.

The Government of India and IR need to find answers to all of this, and find them fast to keep things from getting any worse. The proposed Dedicated Freight Corridors, for example, could be at financial risk - more than three-fourths of the revenues estimated for the eastern corridor are from coal. Indian Railways would be better off planning for a future in which coal is a smaller part of its plans, the authors advise.

A few policy choices for this are also put forward. The most obvious choice to be made, clearly, the report notes, would be to not subsidise passenger fares, but if that is a difficult political decision, then there should be explicit budgetary support for the subsidy from the Government, which is today not available, leaving coal to pick up the costs. A wider variety of freight carried on IR would also help, spreading the burden through more sectors rather than concentrating it on coal, but this would need investments to be able to serve different types of customers. A strong focus on efficiency in its operations, and more flexibility in contracting are also things to be taken up.

The road ahead - or more correctly, the track ahead - doesn't provide much room for wriggle. In due course, IR and the Government will find their choices reduced, and sometimes that's the way policies get made. A more pro-active stance informed by alertness to the emerging landscape could achieve more, and avoid needless harm.

This article is extracted and adapted from "Indian Railways and Coal : An Unsustainable Interdependency", a research report recently published by Brookings India. The full report is available online at the web site of the organisation - www.brookings.in.