Living on the edge

In the shadow of India's most controversial dam, men and women struggle to live with dignity. The first in a series on uprootment and survival in the Narmada valley by Neeta Deshpande.
22 October 2009 -

Silence sometimes tells you what entire stories cannot. Such a silence pregnant with untold stories came my way during a visit to a resettlement site of the Sardar Sarovar dam in Gujarat some nine years ago. Looking back, I don't remember the name of the place. I can't recall the face of my host. What I do remember distinctly, however, is the feeling of hesitation that came over me when I entered the tin shed where this adivasi man had been dumped for many years by the Gujarat Government.

Having left his home on the banks of the Narmada and the field which sustained him behind, I had expected him to be full of things to say: about his uprootment, the desperation of his existence, the injustice of not receiving an adequate recompense for his field and home. Instead, he welcomed me with silence. A stoic, unnerving silence. He was sitting on the ground with his four kids, shelling tur pods. When I sat facing him, he refused to look up. We sat quietly for many minutes, when I could take it no longer.

Are you tired of visitors? I asked, nervously. I'd been told that this particular site had been visited by three different sympathetic urban groups in the last three days. He looked up finally, with an expression conveying that he'd been pushed to the limits of his tolerance. "We are tired", he replied, "but what can we do? We must accommodate everyone." Are there opportunities for majdoori here? I asked again, wary of sinking back into silence. "Nothing", he said. "Aise hi chalta hai." Do the children go to school? "No."

I retreated, knowing fully well that I couldn't console him. If I couldn't do anything for him, I reasoned, I should at least not force him to narrate a sad old story that he had repeated over the years. His silence had told me what his words never could. 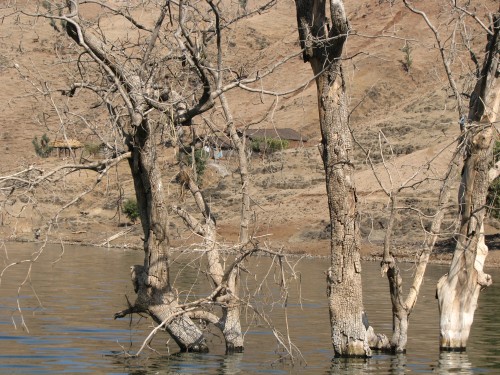 The Sardar Sarovar dam stands at 400 feet, having uprooted thousands of families from their homes and agricultural lands. At its full height of 455 feet, the dam will uproot more than three lakh people and disrupt the livelihoods of tens of thousands of others. After a decade and a half of a heroic, non-violent struggle by the people of the Narmada Valley for reclaiming what is rightfully theirs, the Supreme Court, in a grossly unjust 2-1 majority judgement in October 2000, allowed the construction of the dam to proceed. With their faith in the legal system crushed, the people continued to appeal to the wider world, speaking their truth with patience. Over the years which followed, the world too moved on. The dam rose.

But what of the lives it devastated, leaving behind stolen pasts and shattered futures? Huts still dot the landscape of the Valley, perched on steep embankments, precariously close to the rising waters. Children now bathe in a stagnant, polluted river, fearing crocodiles which have increased in numbers as they are trapped by the dam. Families continue to soldier on, though the ground beneath their feet has literally disappeared. They struggle relentlessly for mere daily survival. They survive the obliteration of their simple designs for the future. And they continue to hope to regain what the dam took from them: a roof over their heads, and a field of their own.

For lakhs of people in the valley, displacement translates to but one lived reality: deprivation for generations. For the Government however, displacement comes in different forms which are managed, manipulated and ignored in a variety of ingenious ways. One fundamental distinction that the Government makes between different categories of the displaced, is that many are not entitled to any resettlement. Not even on paper. So tens of thousands who have lost land to make way for the extensive canal network are fighting a losing battle just to be recognized as project affected.

Thousands who will be displaced by the Shoolpaneshwar Wildlife Sanctuary in Gujarat - planned to compensate for the forests and wildlife lost to the reservoir - are denied their very basic rights. Fishworkers who have lost their livelihoods of fishing and riverbed cultivation are left to struggle and scrape out a living. Those uprooted by the planting of trees to make up for the submergence of forests, have no choice but to oppose the administration. And those dispossessed of lands under cultivation and forest resources in order to resettle other project affected families, are forced to fight off the newcomers, who themselves have fled the engulfing waters of the dam's reservoir!

Of the displaced who are entitled to land-for-land resettlement, thousands are still awaiting their new fields and homes, somehow holding on to a receding hope. In the Adivasi villages on the banks of the reservoir, they live dangerous lives surviving extreme, unthinkable odds. In the fertile plains of Nimad in Madhya Pradesh, they fear the certainty of an impoverished future. And for those who are actually resettled, the outcome is mired with insurmountable difficulties: uncultivable land, tin shacks to live in, flooding in the monsoons, brackish water, poorer diets, fragmented communities, broken promises.

When I attempt to describe this overall picture, the silence of my host in the resettlement site in Gujarat returns to me. Now I know why he chose to say so less. Words probably failed him.

With their faith in the legal system crushed, the people continued to appeal to the wider world, speaking their truth with patience. Over the years which followed, the world too moved on. The dam rose.

•  A river runs through it

His stubborn silence stayed with me in the following weeks, while I visited Adivasi villages which were soon to be submerged by the dam. In every village, I was confronted with the reality of dispossession, throwing up questions about justice which begged for answers. In every house, I was moved by accounts of an unflinching struggle in the face of repression by a State which was determined to build the dam at all costs. Every person I met explained the overwhelming difficulties they encountered in the present, and expressed their unrelenting anxiety for the future. Many times, and in more ways than one, they described how the river that had always sustained them had changed drastically in its very nature.

In matter-of-fact words, they pointed out the perils of still having to live on the edge of the dam's reservoir. And finally, most importantly, they put forth the point of view that they were trying to communicate to the wider world beyond their tiny villages. That they had to struggle for decades against a callous State, only to get back the lands, homes and lives which were always, rightfully, their very own.

My travels in the valley over the years were the genesis of this series of stories about the lives of six individuals living in the shadow of India's most controversial dam. Told through the perspectives of the protagonists uprooted by the dam in markedly different ways, these farmers and fishworkers from the Adivasi areas as well as the fertile plains of Nimad, reconstruct their struggles to live with dignity. These are stories of resilience, courage, and ultimately, survival.

They are narratives of a people who have to brace themselves for every threatening monsoon submergence with fortitude. For when the waters rise, this fortitude is all they have with which to hold on. To life. To hope. And if it can still be said, the faint, nebulous possibility of a better tomorrow.

Immersed in their extraordinary narratives, I left the valley after a visit to return to the glitter and sparkle of urban India. On my way back, as the glow of the first electric lights I had seen in several days filtered through my mind, the questions I had unsuccessfully tried to ignore during the trip emerged once again. How could I even begin to comprehend the cost of the comforts that I'd always taken for granted? Could this cost be understood through the life stories I'd just heard, stories which had become an inseparable part of my now troubled mind? Or perhaps, could it possibly be, that the only way to measure this cost was not through spoken words?

Perhaps, someone somewhere was paying the price for my conveniences without saying anything at all. Perhaps they had lapsed into silence. Like my host in the resettlement site in Gujarat, they might have run out of words.

Neeta Deshpande is a freelance writer based in Bangalore. This article is the first in a series on uprootment and survival in the Narmada valley.