Revisiting the arrest of Sansar Chand

The locking up of the notorious poacher and wildlife trader Sansar Chand was proof that India's police officers could make a difference. But stopping wildlife trade needs more, writes Malini Shankar.
28 February 2009 -

Though notorious poacher and wildlife trader Sansar Chand was arrested several years back and jailed, wildlife crime has not stopped. 39 tigers have been killed post Sariska and not a single charge-sheet has been drawn up even to this day. But the story of the arrest of Sansar Chand reveals the challenge for the system in unearthing India's poaching cliques. Two police officers made a difference - Hemant Priyadarshi and Joy Tirkey. 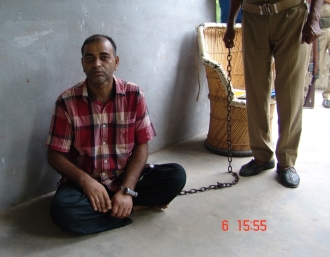 It all began when Shaitan Singh, Head Constable of the Government Railway Police (GRP) Ajmer nabbed Chand's supplier Balwan on the Delhi bound Chetak Express an brought him to the nearest GRP police station in Bhilwara and filed the First Information Report (FIR) in Bhilwara. Thereafter, his interrogation revealed that he was only supplying the goods to Sansar Chand. Based on the statement made by Balwan, the GRP arrested the co-accused in the case: Bura Ghameti, Nava, Kheta, Kheema, Chuna, Mahon s / o Gulla and Mahon, s /o Bhawa.

According to Priyadarshi, the IPS officer who was heading the GRP as the Superintendent of Police at that time, "Once involvement of Sansar Chand in this case became known, (after interrogation of Balwan) we put the case on highest priority, collected previous criminal record and previous conviction record against Sansar Chand to oppose any move for anticipatory bail. We collected all possible circumstantial evidence that we could get."

The GRP also got an extra judicial confession from Balwan, from where the detailed role of Sansar Chand in poaching leopards was highlighted, says Priyadarshi. The Special Public Prosecutor appointed by the GRP opposed the bail application from Sansar Chand right upto the Supreme Court. The panther skins were examined at the Wildlife Institute of India in Dehradun. The entire chain of evidence, evidence for seized panther skin and other circumstantial evidence was collected professionally and promptly put before the court. The extra judicial confession by Balwan proved to be the clincher in the court, according to Priyadarshi. (Section 30 of the Indian Evidence Act provides for confession to be read out against co-accused in a joint trial.)

Caught first, and then let go

When Chand was convicted by the Railway judicial Magistrate of Ajmer GRP on the 29th of April 2004 he was lodged in the Ajmer jail to start serving the sentence of 5 years. His appeal for bail was upheld by the Sessions court of Ajmer on the 19th of May 2004. He was released on bail barely 3 weeks after sentence was pronounced! The bail followed an appeal filed by Sansar Chand against the conviction.

Though the Sessions Court upheld the conviction, the sentence was suspended pending the disposal of the case by a higher court (High Court). This, in effect amounted to release. (It is different from bail in that the person released on bail is expected to sign in the police station every morning as an under-trial released on bail.)

This period was at the height of poaching in Sariska. It is this period in which Chand allegedly got his minions on the fringes of Sariska to kill and cull all the 22 tigers of the premier, pride of India's tiger reserves. Chand exploited the friction the indigenous people nurtured against the park's managers to avenge the killing of their cattle by Sariska's tigers.

By February 2005 the so called Sariska shock became a national admission of the annihilation of tigers in a premier tiger reserve. The CBI started investigating the disappearance of tigers. The shocked nation started demanding answers.

In 2005 the investigators of Environmental Investigation Agency and Wildlife protection Society of India together documented 160 whole leopard skins, for sale in Linxia, with three large stocks of 36, 33 and 28 held by separate traders. In a seizure in India in 2005 60 kilograms of leopard and tiger paws were recovered alongwith skins of leopards, tigers, otters, and snow leopard at a warehouse used by the clique of Sansar Chand.

In August 2005, chupas made of 24 tiger skins, 54 leopard skins, and over 300 otter skins (chupas are traditional vest coats worn by Tibetans) were openly displayed for sale on mannequins in shop windows in Lhasa, according to the shocking report of WPSI - Skinning the Cat. Chupas had became a fashion statement with leopard and tiger skin varieties fetching the highest amounts among the Chinese/Tibetan Nouveau riche.

A 100-tiger skin tent was on grand display at the Litang horse festival in August 2006, and was burnt by Chinese officials eager to show Tibetans in bad light.

Second attempt, after the Sariska shocker

This is the seventh in a series by Malini Shankar.

Police Commissioner Luthra of the Delhi City Crime Branch (CCB) was then assigned the task, with political will, to nab Sansar at any cost. Assistant Commissioner of Police Dr Joy Tirkey of the CCB was given the field task with a grand budget of Rs.20,000! He chose 5 trusted lieutenants. They included one Inspector - Jitender Singh, Constable Dilawar Singh, and head constables Veer Singh and Omprakash.

Police started monitoring cell numbers and through a laborious process of elimination, narrowed down to some numbers for tapping. They then picked up a conversation in West Patel Nagar, near Karol Bagh. During one of those tapped phone calls, a man's voice enquired with a woman's voice at the other end about a newspaper report in Rajasthan Patrika. The newspaper report was about Rani Sansar Chand - his wife who was serving a sentence in Jaipur jail for possession of leopard nails and for trading in wildlife derivatives.

It was Chand enquiring about his wife with his daughter, and the police knew that they had to monitor the woman, and her cell phone calls. Given that the father and daughter - Seema Sansar Chand were talking on coded language, it baffled the cops more. After continued technical surveillance, the police zeroed in on her movements and tracked her whereabouts. It was the reference to Rajasthan Patrika in the tapped telephone conversation and tracking the cell phone towers that brought the cops to within a mile of the whereabouts of Chand.

Sansar Chand had hired a lame beggar in the West Patel Nagar to bring the newspaper from the main road to the interior residential colony. The boy was going to drop off the newspaper at a temple in the residential colony. Later Sansar Chand's illegitimate daughter with his mistress in West Patel Nagar (with whom he had been living in eversince he went underground the previous October - when the Rajasthan cops came to acquiesce his property) would bring the newspaper to his house. The cops peeled their eyes for every single minute detail of the unfolding drama. They local cops did not themselves know who was the high value target being scrutinized.

The day the inspector and the ACP saw for themselves that newspaper was picked up by a child they followed the child with armour and plating, and all. ACP Tirkey hid next to the door of the 2nd floor residence while Inspector Jitender Singh knocked on the door. The child opened the door. Sansar Chand was actually performing Aarati after his morning prayers.

Not the least surprised, he calmly asked the cops to wait outside while he finishes his prayers. ACP Tirkey and his platoon of cops had surrounded the whole encroached, illegal building. Chand's escape hatch was all but sealed. Singh went into the house after the prayer and told Chand "Sansar Chand, we are the CCB Police of Delhi Police, your game is up and you are under arrest". The cops handcuffed him and brought him down in full view of the shocked lower middle class neighbourhood. On 1 July 2005 the Delhi CCB handed over the wily Chand to CBI custody. Two police officers had made a difference - Hemant Priyadarshi and Joy Tirkey.

One arrest does not a criminal trade stop

Though Sansar Chand has been in jail, his brother, brother in law, sisters, and sisters in law, son, nephews, nieces and daughter have continued trading in wildlife derivatives. Sansar had not spared his mother either. Wildlife crime has not stopped, although the peak of the notorious markets has since subsided.

Like Priyadarshi and Tirkey, there are committed and efficient officers in each state. But 39 tigers have been killed post the Sariska debacle and not a single charge-sheet has been drawn up even to this day against any forest guard. This alone speaks volumes about accountability and political will in the country. Upright officers lack the political will and support to pursue their cases, even as political will is indispensable to law enforcement.

Malini Shankar is a Bangalore-based environmental/wildlife photo journalist and photographer.