The Wildlife Institute of India's census report estimated 1,411 tigers in Indias Protected Areas. The report is significant for thorough and precise documentation of habitat loss for the tiger, writes Malini Shankar.
31 March 2009 -

The wildlife census report Status of Tigers, Co-predators, and Prey in India 2008 submitted by the Wildlife Institute of India (WII) estimated 1,411 tigers in Indias Protected Areas (PAs), with a maximum 1,657 or a minimum of 1,165 tigers. The report is a scientific estimate of tigers, their prey base and habitat.

WII was commissioned by the National Tiger Conservation Authority (NTCA) and the Government of India to estimate tiger numbers after the debate surrounding the total number of tigers killed in Sariska Tiger Reserve. "The exaggeration of tiger numbers over the years - the fudging of figures - has meant that the government has been able to avoid reacting to all the other warnings - such as organised wildlife crime and the poaching threat, the loss of all the tigers in Sariska and the Tibet expose," says Belinda Wright of the Wildlife Protection Society of India. 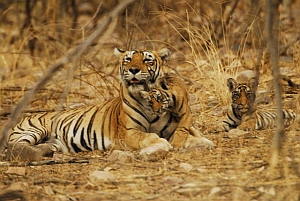 Machali, the tigress with her cubs in Ranthambhore Tiger Reserve: habitat protection is the key to sustenance of the gene pool. Inviolate spaces offer ideal breeding conditions for the tiger. Pic: Rajasthan Forest Department.

While the report has been critically acclaimed, it is significant more for its thorough and precise documentation of habitat loss for the tiger, than in the enumeration of tigers itself. Equally critically, the report finally buries the older pugmark method of census, which was an alibi for foresters to inflate tiger numbers, given the challenge of prosecuting poachers. The pugmark method suffers from reliance on experts to identify individual tigers from the characteristics of the pugmarks, says Dr Y V Jhala, senior faculty and Carnivore Biologist of the Wildlife Institute of India. The plaster casts of the right rear foot look different on sandy loamy soil like on river beds, from that cast on clayey soil in other landscapes that is the dilemma of park managers says Dr Rajesh Gopal, Member Secretary of the National Tiger Conservation Authority. (NTCA)

Jhala led the team of 50 field biologists for the conduct of the largest wildlife census ever undertaken. 88,000 forest staff assisted, according to Jhala. Two levels of data  one at the ground level in tiger beats and other through remote sensing  were combined. The analysis showed that tigers occupy areas where human impacts are minimum; also high tiger densities are achieved only in areas with low human disturbances. When there is good food there is a higher population of tigers. Night lights signify places that have electricity - centres of urbanisation - it is a very reliable index of the human footprint on the planet Where humans are plentiful wildlife does not survive! says Jhala.

Substantiating the claim that the tiger is at the head of the faunal spectrum, the report counts atleast 57,419 leopards, 1,34,833 wild dogs, 49,090 Sloth Bears, among carnivores and 69,026 Spotted Deer/Chital 78,861 Sambar (stags/Indian antelopes) and 25,808 Nilgais or (Blue Bulls) among herbivores. These numbers appear to be in line with the prey base theory propounded by renowned wildlife biologist Bangalore-based Ullas Karanth, who is affiliated to the Wildlife Conservation Society of New York.

But Karanth, who had for long criticised the hitherto official pugmark census, remains skeptical. "WII scientists have not produced any scientific publication in which their method is fully described. Only some glossy reports are available at this stage. So at this point I cannot comment further," he says.

The census has counted at least:

In another peer review, Dr John Seidensticker, Conservation Biologist of the Smithsonian National Zoological Park and Dr Ramona Maraj, Conservation Biologist Canadian Department of Environment, Yukon, have criticised the report. A substantive deficiency we noted in the Framework for Monitoring Tiger Population trends in India is the absence of tiger mortality monitoring, they say. High feline mortality especially of cubs has been discounted and not computed in this census.

The WII report says that there are only 4 healthy tiger landscapes in India, which, with inter connectivity and inviolate corridors can offer long term sustenance of the tiger. These are:

The landscapes in the NE Hills and the Brahmaputra plains currently report tiger occupancy in 4230 km2 of forests, supporting 200 tigers; forests though fragmented, are connected through the forests of Bhutan. Gopal says 20 - 25 corridor linkages for the 4 identified tiger landscapes have been drawn up based on the conservation recommendations.

However, this leaves atleast one NGO in Assam a bit skeptical: Nothing on the ground has happened. It could be just another report for the state government, says a bit disappointed Dr Bibhab Thalukdar, the Secretary General of Aranyak, wildlife NGO in Kaziranga Tiger Reserve. Most wildlife activists refrain is that camera traps were laid only in places where tiger presence was a certainty. Hence it is not entirely accurate they aver.

This is the region that boasts of the best tiger landscape for long term conservation of the tiger gene pool. The single largest population of tigers in India is within this landscape comprising the landscape of Nagarhole-Madumalai-Bandipur-Waynad says the census report, thus consolidation of habitat in this corridor is absolutely critical. It hosts 280 tigers across 10,800 square kms.

It serves as a fine example of managing inter-state tiger reserves for establishing populations that have a good chance of long term persistence and provides a source to repopulate neighbouring forests, says the report. The voluntary resettlement of people from Nagarhole with positive collaboration between government and non government agencies in the Nagarhole Tiger Reserve must continue to permanently resolve the human wildlife conflict through a win-win solution says Praveen Bharghav of Wildlife First in Nagarhole.

We are now focusing attention about where to deploy the Tiger Protection Force, and we have identified the vulnerable source populations of tigers, after the tiger census report, says Gopal.

The relocation of tribals from the Mudumulai Tiger Reserve commenced a few months ago, amidst noisy protests. The forest department has the responsibility to facilitate resettlement; with the new tiger conservation guidelines being issued, each adult is entitled to a package Rs.10,00,000 or material resources worth the same amount - including land for relocation and title deeds for housing outside the tiger reserves. Whether all these provisions have been made was the focus of the protests against relocation here.

The Central Indian landscape has vast stretches of tiger habitat and if connected with the Eastern Ghat landscape it will sustain the tiger gene pool remarkably, rendering wildlife management in the hands of mother nature itself. There is the prospect of seamless contiguity of habitat in: Kanha, Bandhavgarh Pench (47 tigers) and Panna (24 tigers) in Madhya Pradesh, Ranthambore Kuno Palpur on the Rajasthan-MP border (24 tigers), Sariska Tiger Reserve, Palamau Tiger Reserve (contiguous from Bandhavgarh in NE MP to Palamau in Jharkhand), Indravati Tiger Reserve in Chattisgarh (contiguous to Kanha in the NW in MP) to Simlipal in Orissa (20 tigers).

By connecting large PAs in Eastern Ghats with the Central Indian PAs, a very big tiger landscape could emerge; the WII report has overlooked habitat connectivity in the Eastern Ghats landscape," says Asif Siddique of Hyticos, wildlife NGO in Srisailam.

Northern Andhra Pradesh has some very thick forests which could possibly be notified as linkages (or corridors) for the Srisailam Nagarjunsagar Tiger Reserve in AP with the Tadoba Andheri Tiger Reserve in Maharastra, which in turn can be connected through corridor notification to Pench Indravati and Simlipal Tiger Reserves.

The report says that the Eastern Ghat complex is constituted by the Srisailam-Nagarjunsagar Tiger Reserve Andhra Pradesh and supports an estimated population size of 53 in a single contiguous forest block that spread across 15,000 square kms. "Insurgency, biotic pressures, and subsistence level poaching of tiger prey," plague conservation, it points out. The dense forests of this tiger reserve on the Eastern Ghats offers pristine habitat for the entire faunal spectrum of the Royal Bengal tiger. In addition, the tiger in effect protects the unquantified resources hidden in the treasure trove of the biodiversity reserves.

Despite very, very thick forests including crocodile sanctuary, mangrove ecosystems, 4 tiger reserves and impenetrable moist deciduous forests, lack of interconnectivity plagues sustenance of genetic diversity of tigers. The bamboo lobby here is all too powerful defying declaration of reserved forests as buffer zones for the tiger reserves. Inter connectivity offers vast undisturbed habitat. Political will for conservation offers the only hope for the harried Royal Bengal Tiger in its last refuge in India.

An opportunity for redemption, since the Sariska debacle

Since submission of the census report to the Government of India, all tiger reserves have been declared in the financial year 2008-09 as critical tiger habitat, to facilitate speedy relocation of people. 8 new tiger reserves are being notified. In some cases notification have been issued, in some others, demarcation is going on, in some, field directors are yet to be appointed, in some the funding has just been granted -- the new reserves are in various stages of birth pangs. Biodiversity committees have been entrusted with identifying flora and fauna to document peoples' interdependence on forest ecosystems in conformance to the Forest Rights Act.

For the four landscapes mentioned above, It is upto the state governments now to draw action plans based on the conservation recommendations says P R Sinha, the director of the Wildlife Institute of India. Consolidation of these 4 landscapes can offer genetic diversity for the highly endangered tiger as it protects tigers and faunal spectrum in inviolate corridors. The tiger and its faunal spectrum need political will in the states, urgently. We have for the first time a high resolution spatial data set on where Indias tigers are, individual populations, tiger numbers and connectivity with other populations, says Jhala.

Malini Shankar is a Bangalore based wildlife photo journalist and documentary filmmaker and runs the Weltanschauung Worldview Media Centre.