Inviolate space for conservation is not negotiable

Man-animal conflict in India is taking a heavy toll on habitat and thereby the survival of wildlife. Malini Shankar writes that there is no option but to relocate forest-dwellers out of protected areas.
05 February 2011 -

In end of November 2010 an elephant calf was separated from its mother and her herd near the Mettupalyam forests of the Nilgiris Range in northern Tamilnadu. The herd was traumatised because it was petrified of the violent beating of drums at a funeral procession on the forest fringe. A valiant rescue attempt by forest department personnel only ensured the maternal rejection of the elephant calf. Finally the calf was taken to a zoo in Chennai. The elephant calf died. 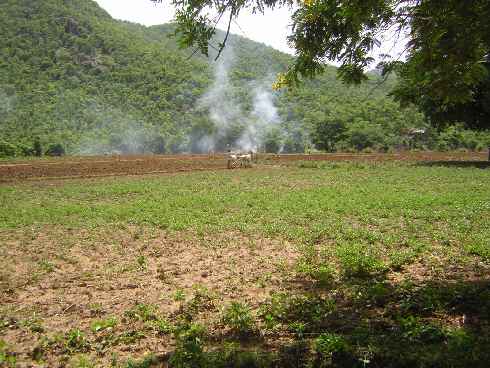 In May 2007 a tigress in Ranthambhore Tiger Reserve was shifting her cubs from one location to another. All three cubs fell into an abandoned well while the mother walked on. Early next morning a forest guard heard a faint moan in the well and looked down in sheer horror; petrified of the potential blame he would earn  for it happened in his beat, the guard called the officers. DCF R S Shekhawat was also nervous but he made his way to the abandoned village on the eastern frontiers of RTR and physically slid down the abandoned well, and discovered that 1 cub was dead, one died in the rescue and 1 could be rescued.

Man-animal (anthropogenic) conflict in India is taking a very heavy toll on habitat and thereby the survival of wildlife.

•  Was this tiger a man-eater?
•  Tribals and forest interdependence

An emotional Shekhawat lifted the baby tiger like it was his child and brought it out. Camp was set up with air coolers, and dried leaves as camouflage. Bait was set up, and a 24 hour vigil was mounted; finally the tigress came back and the emotional reunion of mother and son touched many a nerve. I was witness to this. Even 1 week after the rescue, I personally found the mother was suckling the rescued cub, but 3 weeks later the cub died of starvationpossibly due to maternal rejection.

On the other side of the coin, at the Dandeli Anshi Tiger Reserve in the Western Ghats there are atleast eight people who have been mauled by the Sloth Bears.

1. One had his scalp gouged out,
2. Another had his ankle bones ripped apart,
3. Anothers wrist bones were smashed,
4. Another young girls cheeks pulled and torn till the back of her neck,
5. Another man had his pelvic bones dislocated,
6. Another tribal had severe and very deep bear bites on the back of his lean thigh,
7. Another man suffered multiple fractures of his rib bones,
8. The last victim I met had a bear attack him on his left forearm so viciously that it has left his left arm significantly shorter than his right arm.


Conflict taking toll on both humans and animals

Man-animal (anthropogenic) conflict in India is taking a heavy toll on habitat and thereby the survival of wildlife. Habitat fragmentation is leading to isolation of animals, inbreeding, and causing local extinction of such species. If wildlife are restricted in their movements and in their sociology (mating patterns and territoriality) it will lead to inbreeding, further weakening the genetic pool. This applies to all endangered birds, reptiles, insects, and mammals.

In early 2010 there was an official alert that 1000 tigers were reduced to skin and bone since the last census of 2008. The 2008 census said there 1411 tigers remaining. Only 50 percent are females. Of these there are many which are old and frail, and are not breeding any more. Many other males are of the same bloodline so mating is impossible. Genetic inbreeding amongst felines is one of the greatest threats to tiger numbers. Taking all this into account, only 1/3rd of the 1000 odd tiger population in India are fit to breed.

Anthropogenic conflict is the genesis of trauma to both man and animal. Habitat loss accrues from:

As if loss of habitat is not dangerous enough for long term sustenance of the wildlife, the scars left behind by the development quotient also takes a severe toll on wildlife and its gene pool. Oft found scars of anthropogenic conflict include:

Roads that slice habitat into pieces like in Bandipur Tiger Reserve, Karnataka, are a cause for accidents that annihilate the remaining gene pool. Earlier this month, a leopard was run over by a truck on southern expressway (Nandi Infrastructure Corridor Enterprises Road or NICE Road in short) near Bangalore's Bannerghatta National Park which is an elephant corridor. If roads had not been laid in wildlife habitat, this leopardess would not have died a ghastly bloodied death on an asphalt strip.

Endemic wildlife sometimes cannot even recognise their own homes in the forests because of alteration of their habitat.

Underneath the conflict: condition of tribal forest-dwellers

It is also not as if forest-dwellers are uniformly satisfied and happy about their lives. As is well known, indigenous people in Indias tiger terrain suffer from wretched conditions of poverty, lack of health and hygiene, lack of livelihood, illiteracy, and without access to potable water and sanitation. In some cases inbreeding and declining rate of birth rates (especially in Andaman Nicobar Islands) are problems.

Unable to bear the hardships of leading a dignified life living cheek by jowl with wildlife, a large percentage of tribes living in forest areas crave for relocation, provided of course they get livelihood options, and are able to retain their cultural and tribal identity. Yet, anthropologists contend that tribes have been coexisting peacefully for thousands of years in wildlife reserves while the concept of wildlife and biodiversity conservation is nascent. In line with this, they say that relocation of the indigenous people will rob them of their dignity.

Malini Shankar is a Bangalore based wildlife photojournalist, radio and TV producer. This is the 12th article in her series Tiger the Lost Emperor. She runs the Weltanschauung Worldview Media Centre.