Habitats and corridors for wild elephants are shrinking due to other development priorities of the state. And local communities are growing angrier at the rising number of conflicts. Wildlife advocates say a number of conservation efforts are needed to stem this. Abhijit Mohanty reports.

Rising human activity in the forested areas of Odisha has brought people into conflict with animals in the wild, particularly elephants. Data from the Odisha Forest and Environment department shows that 732 elephants have died in the state between 2009 and 2019. But it is not only the animals that are at risk; people too are vulnerable. A total of 117 people also died in the state due to conflict with animals in 2019-20, while 82 more lost their lives in 2020-21, according to the Union Ministry of Environment, Forest and Climate Change. These numbers make Odisha the state with the highest human-to-elephant death ratio in the country.

As people - and development projects - venture into wildlife habitats, the space for the animals is shrinking. This is also driving them to other areas that are populated in search of food, bringing them into closer contact - and conflict - with them "It is humans who are increasingly entering into the habitat areas of elephants," states a report published by the Wildlife Trust of India. Poaching, which has always been a threat, has also not been sufficiently checked.

The human-elephant conflict is increasing intolerance among local communities to co-inhabit with elephants, as they too are increasingly becoming victims. "Cases of retaliatory killings are frequently reported these days," says Mohanty Birua, sarpanch of Astakunwar panchayat in Mayurbhanj district. Electric fences are being deliberately overcharged by poachers and landowners to kill the elephants." The data bears this out; nearly one out of six elephant deaths in the last decade have been due to electrocution. "Constant antagonism demonstrated by humans, and also poaching, is believed to cause young elephants to grow up to be aggressive and hateful towards humans as a result of a lifetime of distressful interactions, Birua highlighted. 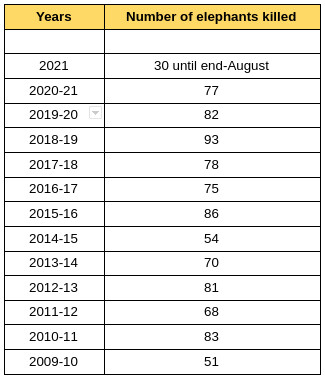 Conservationists working in the Karlapat Wildlife Sanctuary in Kalahandi district alleged that deforestation and shortage of food resources in the habitat is increasing the rate of human-elephant conflicts. Human habitations and farmlands are near the elephant habitat and movement routes. "When elephants destroy the crop or human settlements, people, in turn, harm the elephant in retaliation," said Medha Nayak, who conducted a research project titled Understanding human and elephant interactions in Northern Odisha in 2020.

Iron ore and coal mining in Northern Odisha is not only destroying large swathes of habitats but also fragmenting them and forcing elephants to displace to human settlements. Fragmentation of habitat causes elephant populations to get isolated from each other. "This increases the risks of reaching genetic bottlenecks through inbreeding," warns Aditya Panda, a conservationist who has been appointed by the Odisha Government as the Honorary Wildlife Warden of Anugul district, where he works to protect Satkosia Tiger Reserve and Mahanadi Elephant Reserve.

"Elephants are a determined species," said Panda aiding that, "It is their natural behaviour to overcome hindrances along their paths of migration which ultimately fuels the human-elephant conflict." Forced localisation of elephant population as a result of habitat fragmentation can cause habitat degeneration and due to local overfeeding, elephant populations often forage on crops like paddy, sugarcane, maize, etc. Unsustainable cattle grazing, replacement of native flora with invasive and monocultures of fast-growing non-native trees also reduces the capacity of forests to sustain the elephant population.

The aggressive promotion of afforestation using Compensatory Afforestation Fund Management and Planning Authority by the forest department has emerged as one of the major reasons for habitat degradation in Odisha. Several studies have revealed that afforestation is destroying natural habitats of wild animals and aggravating the loss of natural landscapes like grasslands, wetlands and scrub through the plantation of non-native trees.

In the last two decades, poaching for ivory has been intensified by traffickers in the Badamba-Narsinghpur, Khurda and Nayagarh-Daspalla region of Odisha. Illegal manufacturing and sale of arms for hunting across the state help poachers pointed out Panda. Apart from targeted poaching for ivory, there is widespread bushmeat poaching, especially wild deer and boars. This is done on a commercial scale to meet the demand from highway side dhabas and private orders for wild meat. Poachers are using guns, snares, poisoned baits, explosive-laden baits and electrocution.

Picture: A hand-made gun was seized by a forest patrol on 6 October in Simlipal Wildlife Sanctuary.

"Regrettably, these days, underground electric cables are being found in the forest laid by the poachers to electrocute wild animals," said Panda. These electric traps kill all living being that comes into contact, including elephants and even humans." Machua Ho, who works in a government primary school around the Simlipal National Park in Mayurbhanj district, said, "There are some areas in and around the park which are very dangerous. Local people often advise others not to venture out after dark for the risk of electrocution."

Corridors play a critical role in maintaining a healthy elephant population. The animals use them to move about in search of forage. It also reduces elephant fatalities due to accidents and encounters with humans. In August, the National Green Tribunal directed Odisha to notify 14 elephant corridors within two months. This will protect the elephant corridors from industrial development projects which are not environment and wild animal friendly.

The notification of the proposed Bramhani-Baitarani Elephant Reserve and South Odisha Elephant Reserve will significantly safeguard these landscapes and endangered species. "The state government should realise that it is high time to phase out extractive use of natural habitats like mining," Panda emphasised. A long-term sustainable conservation plan which includes active community participation is the need of the hour. Instead of an afforestation programme, Odisha should draft a comprehensive habitat restoration policy that focuses on restoring degraded and destroyed habitats.

"We should reward local communities who give intelligence about illegal hooking and elephant poaching," said Bajuram Ho, a tribal leader in Mayurbhanj's Haridakut village. Forest officials should involve tribal communities in the protection of elephants and other wild animal species, Ho pointed out.

Compensation plays a critical role in mitigating human-wildlife conflict. However, the present process of obtaining compensation for loss of crop or property of humans is time-taking and requires a lot of documentation work for the applicant. There is also widespread corruption at the lower administration of the forest department. Government should ensure transparency and accountability in the entire procedure of compensation management.

"Early and adequate compensation can play a critical role in ensuring conflict mitigation," believes Panda. Antagonism towards elephants from the loss of property, crop and livestock could be effectively avoided if timely and fair compensation is paid to the local people. An advance amount could be allocated to Vana Surakhya Samities before the beginning of the harvesting season. This will ensure immediate disbursal of compensation with minimal paperwork.

Poor handling of conflict situations by the frontline forest staff is also a matter of concern. It is often seen that these personnel arrive quite late at the locations where conflicts are reported. This happens because of shortages of resources, lack of manpower and poor skills. The result is antagonism and a lack of trust among the local communities towards the forest staff. "We can address these challenges through regular training and capacity building and allocation of adequate resources and manpower," underlines Panda.

Conservation institutions often alleged that lack of inter-department coordination is one of the greatest hindrances to effective protection and management of human-elephant conflict in Odisha. To holistically address human-elephant conflict, there should be collaboration between forest officials and other district administration officials, including revenue officers, police and fire department staff. It is challenging to manage a crowd of people at conflict sites who may be harassing and harming animals, abusing forest staff, and preventing them from discharging their duty to rescue and ensure safe passage to the animals.

"We can't address these challenges unless everything is institutionalised," says Panda. There is an urgent need for making a standard operating procedure by the state government which would ensure collective action by the entire district administration. Uttar Pradesh has declared human-wildlife conflict as a state-declared disaster. This makes it imperative for all line departments in a district to swiftly act upon every case of conflict and poaching. This strategy also creates a need to allocate additional funds towards compensation for loss of life and property as a result of human-wildlife conflicts.