Manipuri mothers want an end to the killings

The International Day of Peace, celebrated on September 21 every year, has little meaning for people living in conflict areas. Like the Manipuri women, who feel that decades-old violence in Manipur has not only increased but taken many different forms. Anjulika Thingnam speaks to some of the feisty women of Meira Paibi (women vigilante) groups of Manipur to find out more.

For more than six decades violence has been a constant in Manipur. With more than 40 insurgent groups demanding self-determination and the government responding by imposing the draconian Armed Forces Special Powers Act, (AFSPA) 1958, an internal war has been simmering for years throwing the lives of ordinary people, especially girls and women, completely out of gear.

No one understands the adverse effects of unending conflict better than Keisham Taruni, 84. As the president of the All Manipur Reformation and Development Samaj, or Nupi Samaj, one of the leading Meira Paibi (women vigilante) groups, she has seen how women get caught in the crossfire and lose their rights, dignity and, often, their life, too.

The protest that shocked India

Taruni has always been a woman of action although, much to her frustration, her advancing age has slowed her down a little. The face of many local movements, she is one of the 12 women who, in 2004, had shocked the nation with their nude protest in front of the western gate of the iconic Kangla Fort in Imphal asking the Assam Rifles personnel there to “rape us, take our flesh”.

The immediate cause for the outburst had been the rape and killing of a young unmarried woman, Thangjam Manorama, by security forces on July 11, 2004, after she was picked up from her house. “We were among the first to see Manorama’s severely mutilated body. I can clearly recall how the bullets had dropped out when the cloth was removed,” says Taruni.

It was sheer desperation that drove the mothers to take such a step. “We had sat on ‘dharna’, taken to the streets crying ourselves hoarse. Yet, there was no result. It was time for a last stand, to do something that had never been done before,” recalls Taruni. Seated by her bedside, Thokchom Ramani, 84, secretary of Nupi Samaj, narrates, “That day we prayed to the gods, decided to go on a fast and came out ready to die. We came out so that Manorama’s fate did not befall others.”

The decision was taken jointly. “What use were our clothes? Since the AFSPA had been imposed in 1980, they had killed us, raped us indiscriminately. It was as if we did not cover ourselves. So we said, fine, take our clothes, we will fight you naked. Come out if you have the strength/courage,” recalls Laishram Gyaneshori, 63, of Apunba Manipur Kanba Ima Lup (AMKIL), another women’s group that was part of the protest.

Ima Lourembam Nganbi, 63, vice president of AMKIL, who has been in and out of jail often, continues, “We gathered at the gate, spread out the banners, and then swiftly threw away our clothes. We could not hear or see anything else except our furious voices. We were in a trance-like state.” Although the 12 were arrested soon after, they shouted slogans and went on a hunger strike inside the jail. They were released after three months and all charges were dropped. 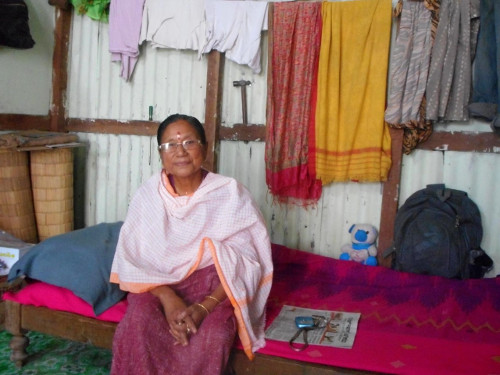 Of the 12 mothers, only Nganbi and Gyaneshori are graduates, the rest are mostly illiterate or semi-literate. Yet, their life experiences are similar. All of them married early and spent their youth as homemakers, caring for their children and serving their husbands and in-laws. The shift in roles from the domestic to the social sphere took place during the late 1970s, when they came out as part of women vigilante groups against prevailing alcoholism, and later to fight human rights violations in the name of counter-insurgency operations.

Even though they had spent their whole lives upholding traditions, on July 15, 2004, the women shed their inhibitions and their clothes. Along with demanding the repeal of AFSPA, they called for the handing over of Kangla Fort, a religio-historic site that had been occupied by the British and the Assam Rifles since 1891 after the Anglo-Manipuri war.

The Assam Rifles had continued to stay on and the people saw its occupation as yet another symbol of the highhandedness and colonial attitude of the security forces. “The word on the street in those days was that once a person was taken inside Kangla s/he was never to be seen again. The other point of contention was that though Kangla is our most sacred place, we had no access to it,” shares Yumlembam Mema, 79.

Last year marked a decade of this iconic protest but the mothers seem just as dejected. “They have removed the AFSPA from seven assembly constituencies in the Greater Imphal Area and withdrawn Assam Rifles from Kangla. But what happened to the Jeevan Reddy Commission on AFSPA? Why hasn’t there been any word on that?” questions Gyaneshori.

“Politicians make tall claims in their manifestos and then rush to grab credit for the little change that has taken place after we, old women, faced the teargas from the forces, spent so many days in jail, and protested under the harsh sun,” fumes Ima Ibemhal, referring to the Ibobi-led government hightailing the handing over of Kangla to the people as their achievement. “Why has Manoroma’s case been suppressed, this is our main question,” she adds. 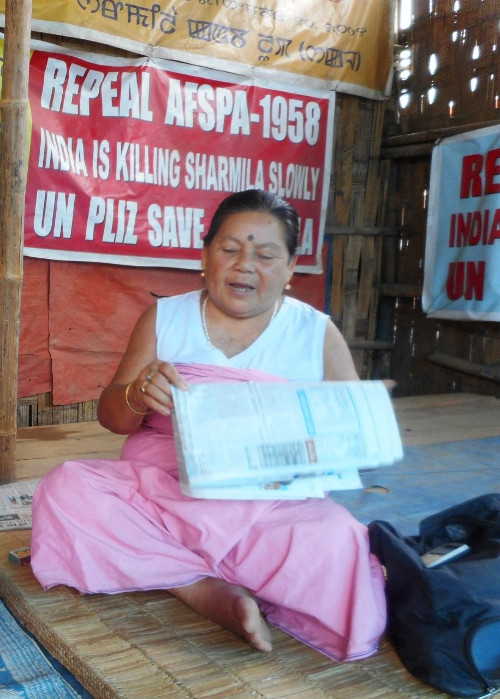 According to Soibam Momon, 61, president of the All Manipur Tammi Chingmi Apunba Nupi Lup, life in Manipur is just as chaotic and tumultuous today as it was then. “At one time, the loss of a life was such a tragedy that we would mourn it deeply. But now even 10 lives lost have come to mean less. What we want is an end to the killings,” she urges. Adds Nganbi, “The army rapes have decreased, but it is the police and our own brothers who have taken over as rapists and violators.”

The realisation that their protests and activities have done almost nothing to alter the status quo in the region may have resulted in a lot of despondency but the mothers are not ready to quit.

“Not much change has come about, that’s why we are troubled. Just the thought of what to do next keeps me awake at night. The killings have increased and have taken many different forms … We continue our struggles knowing that we do not have much time till death; we want to do something before we depart,” Taruni says.

Indeed, the fact that “violence creates only violence” is clearly visible throughout Manipur. In fact, the gruesome attack on Indian Army soldiers in June 2015 in an area where AFSPA is fully applied is evidence enough.

As another prominent AFSPA protestor, Irom Sharmila, who has been on a fast for about 14 years demanding the repeal of the Act that gives the army sweeping emergency powers in troubled areas, recently stated in the media: “The Government should change their policies and programmes... [After all] violence will never solve any problems.”

Meanwhile, Taruni and her group of grand old women want another Nupi Lan. “We have seen two Nupi Lan (means women’s war in Manipuri), we are preparing for the third. Not just with five or 10 women but all women. We need a united force,” concludes Taruni. (© Women's Feature Service)