Commenting on the dress sense and looks of women in power is only one aspect of the tendency to run down their success. And women are expected to laugh this off, writes Kalpana Sharma.
10 August 2009 -

Does anyone care or comment on the colour of Prime Minister Manmohan Singh's turban when he appears in public? Do the looks of a man or woman define their efficacy as leaders - of countries or businesses? The answers to both questions are fairly obvious and should not be a subject of debate. And yet, women in positions of power never seem to be able to escape public discussion about their looks and their appearance.

Recall the recent visit of US Secretary of State Hillary Clinton to India. For a week she was on the front pages of our newspapers and on every television channel. She had official meetings and unofficial ones. She met businessmen and politicians but also self-employed women and students. Most of the media coverage centered on these meetings. Yet Hillary Clinton could not escape the inevitable personal comments about her looks, what she wore, how she did her hair etc. One newspaper ran a feature asking local fashion designers to comment on Clinton's dress sense.

On her very first day in India, Hillary Clinton held a breakfast meeting with top industrialists in Mumbai. The headline? "Clinton makes fashion statement with red business suit." And the news item about the meeting began as follows: "Her short blonde hair neatly pinned back perfectly complemented her attire with the ensemble being completed with smart cream and black pumps that seemed more than adequate for the long day ahead." Are such comments necessary? When the foreign minister of any other country comes visiting, do we observe the clothes these gentlemen (and most often they are men) wear? 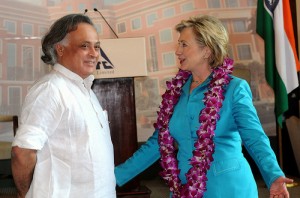 Picture: US Secretary of State Hillary Clinton during her recent visit to India.

Personal comments are an occupational hazard most women in public life have to face. Hillary Clinton has survived the most vicious attacks on her looks, personality, way of speaking etc. not just in the years when she was the First Lady and her husband Bill Clinton was the President of the United States but more recently when she tried to win the nomination to become the presidential candidate of the Democratic Party and lost to the present incumbent in the White House, Barrack Obama. She has probably developed a very thick skin after that kind of assault by the media.

In an entertaining book Why women should rule the world, Dee Dee Myers, who was Press Secretary in the Clinton White House, describes the constant focus on Hillary's looks: "For more than a decade, her (Hillary's) appearance has been the subject of an on-going and robust national conversation. She should wear pants. No, skirts. Her hair is too long. No, it is too short. Her gown is too conservative?"

Media coverage in recent years continues on the same lines and the comments on the Internet, especially in the US, are full of personal invective against Hillary Clinton based on the superficial - usually how she looks or the way she says something. Only lately are some people acknowledging that she is actually doing a fairly good job as the Secretary of State.

Myers too faced this kind of attention in her first few weeks in office. "From the time I joined the Clinton campaign", she writes, "virtually every story written about me included observations about my hair, my earrings, my makeup, my clothes, my coat." When she became White House Press Secretary, a choice that was considered unusual at that time, the attention became even more pointed.

In India, there is rarely an open comment about the looks or dress sense of the most powerful women. The reason is not that the media in India is particularly gender sensitive. It is because it is hierarchy conscious.

•  Why a dress code for women?
•  Transforming Kavthepiran
•  Learning to be leaders

Women are supposed to laugh this off, take it on the chin and even be flattered by such attention. Yet, it is irritating and insulting. Women who make it to positions of prominence work their way up just as men do. Yet, when they get there, they are confronted by a barrage of speculation about how they made it followed by all-out attempts to trivialize their very presence in public life. If this happens once or twice, you can write it off as an aberration. But if it happens consistently, admittedly in some countries more than others, then you realise that it is a norm.

In India, partly due to our willingness to be utterly mindful of hierarchies, there is rarely an open comment about the looks or dress sense of the most powerful women in this country. No news item on Sonia Gandhi, for instance, makes a personal reference. Mayawati has been the butt of some jokes about her choice of clothes and handbags but the routine news item about the UP Chief Minister will not mention either. And even the top women in business escape this kind of personal attention. The reason is not that the media in India is particularly gender sensitive. It is because it is hierarchy conscious.

I suppose prominent women in this country should be grateful for such small mercies. When Meira Kumar was chosen Speaker of the 15th Lok Sabha, one wondered how the press would report on her performance. Thankfully there were no reports on what she wore on her first day as Speaker. But India's first woman Speaker has surprised not just Members of Parliament from the treasury and opposition benches but also the media. A news item on August 3 in a national daily had the following headline: "House in order, thanks to Meira". It described how effective Speaker Meira Kumar had been in controlling unruly Parliamentarians during the Budget session of the Lok Sabha. "Her small voice, almost languid demeanour and understated style have been deceptive", writes the correspondent.

Comparing her to the previous Speaker, the imposing Somnath Chatterjee, the correspondent writes, "Meira employs a tone of soft reasonableness and invariably get her way. In short, her softness and economy with words - which were initially viewed as handicaps - have actually turned into her strong points." He goes on to ask why these attributes had not been recognised earlier either by MPs or by the media. "Would it be because of male bias?" he asks.

Good question. However, the attributes that this reporter describes, her "softness", the tone of her voice or her "languid demeanour", are not the ones that have worked for Meira Kumar. What has worked is her ability to negotiate, make peace, find the middle ground, persuade and calm tempers. This does not come naturally to either men or women but I think women are better equipped because they have to use these skills more often in daily life. Hence, their ability to play the role of moderator - regardless of the pitch of their voices - or the clothes they wear.