Teen journalists make their own newspaper

These kids can hold their own on sensationalism in the media. Why? Inspired by Mahatma Gandhi's vision of journalism, they help put together a newspaper called The Yamuna. Shobha S V has more.
15 November 2008 -

New Delhi (WFS) - Mahatma Gandhi once said that: "The sole aim of journalism should be service. The newspaper is a great power, but just as an unchained torrent of water submerges the whole countryside and devastates crops, so an uncontrolled pen serves, but, to destroy. If the control is from without, it proves more poisonous than want of control. It can be profitable only when exercised from within." Going by this line of reasoning, how many publications in the world today would be able to measure up?

While Gandhiji tried to uphold these ideals when he published 'Young India' and 'Harijan', they seem completely out of sync with today's consumerist generation and one that is dominated by the big, corporate media.

However, there is a bunch of teens who are trying hard to live up to the ideals of their beloved Bapu. They produce 'The Yamuna', a newspaper presented by the New Delhi-based Gandhi Smriti. Launched in 2007, as part of the Gandhi Media Literacy Programme (GMLP) initiated by the Smriti, the newspaper is in its second year of publication. The GMLP wants to bring a critical understanding of the media amongst children, besides empowering them to develop writing skills to voice their concerns on various social concerns, says the group's website. 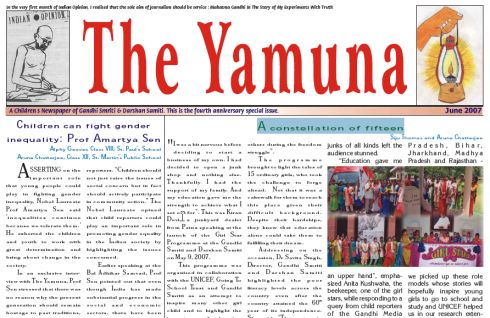 A team of more than 30 teenagers, mostly girls, from across India keeps writing stories of social relevance during the months when they don't have exams. Commenting on the high number of girls on the journal's editorial team, Veda Vyas Kundu, a member of Gandhi Smriti and the co-ordinator of the newspaper, put it this way, "We experience reverse gender discrimination here. Most of the team members are girls." The editor of the current issue Rijuta Lamba adds, "I don't know why there haven't been many boys in this venture. Probably they don't find it interesting."

Gandhi Smriti members go to various schools and hand pick the children who are to be part of the publication's team. Says Kundu, "We work with several schools all over the country as a part of the Gandhi Media Literacy Programme. That way we are able to scout for students. The goal of the Literacy Programme is to develop in children a critical understanding and functioning of the media. Media production is also an important process in which we encourage the children to participate. We go and talk about the newspaper to students. There is no sifting process. Every applicant is selected. But there are many who drop out midway. In the end only those who are interested stay on."

The newspaper's printing schedule is set according to the examination schedules of the children. The number of pages in each issue ranges between 16 and 20 and includes opinions, interesting features, lively interviews and colourful caricatures and cartoon strips.

Teen editor of the September 2008 issue Rijuta Lamba: "I don't know why there haven't been many boys in this venture. Probably they don't find it interesting."

•  Women for a better media
•  And now the good news

Even though the children have varied and contemporary interests the coverage of various social issues is governed by a sound understanding of good and bad journalism. Surprisingly, though, not many want to pursue a career in journalism. Lamba herself is no exception. She says, "I want to specialise in science. I am not looking at being a media professional. I am just not interested in the profession."

The students keep in touch with each other through email. The story ideas are decided democratically through debates and discussions. Where emails cannot be sent or accessed, the Gandhi Smriti co-ordinators become the messengers.

Working with the newspaper, the girls have developed a keen sense of news along with an idea of what can or cannot be termed as responsible journalism. Recently, 'The Yamuna' team members met with the CEO of India TV, Rajat Sharma and talked to him on various issues like the business of news, social responsibility of the media, and even the working of his channel.

The youngsters captured their interaction with Sharma in the article 'Of Sense and Sensationalism' published in the September 2008 issue. Tackling the issue of sensationalism, the article stated: '...there is one thing for sure that these channels are aiming at - to be at the top.' Sharma was quoted as saying, "This is a business, which has to cater to the needs of people. We as media persons are not involved in preaching. This is not our job. But we show such things, which has an impact on society."

The September issue also tried to figure out what children want to watch on television. A survey, conducted by children in several cities including Delhi, Hyderabad (Andhra Pradesh), Guwahati (Assam), Solan (Himachal Pradesh), Bikaner (Rajasthan) was presented. The sample size in every city ranged from 30-150. The survey concentrated on the media usage habits of children spread across many cities in India.

The teenaged girls expressed a critical opinion of the 'saas-bahu' daily soaps. Himanshi Diwan, a student of Delhi's Presentation Convent, argues, "I don't understand the 'saas-bahu' serials. The stories are always about people with a lot of money. But what about the middle class?" Another team member comments with a laugh, "Women don't sleep with so much make-up on." Lamba adds "The women in such serials always go back to the men even after being treated with disrespect all the time. Why do they show that? Why will a woman do anything like that?"

Unfortunately, no special issue was on the cards for Children's Day on November 14 because of the forthcoming exams - year-end and pre-boards. The next edition of 'The Yamuna' slated for January 2009. In it the children have decided to tackle the issue of multiculturalism. Kundu reveals, "It will be about multiculturalism and identity in India. The children wanted to explore this in the light of the violent incidents in Maharashtra caused by the Maharashtra Navnirman Sena." (Women's Feature Service)