Cooking numbers as agri-volcano builds up

Using a deviously devised method, Maharashtra chief minister Vilasrao Deshmukh is claiming that 75 per cent of Vidarbha farmer suicides are not due to indebtedness at all. Meanwhile, the toll has crossed 250 this year and is rising. Jaideep Hardikar reports.
03 April 2007 -

Ralegaon, Yavatmal, March: Twenty-year-old Jyoti Kinake would have begun preparations for her marriage by now. Instead, the Gond girl isn't sure if she could cherish her dream ever.

On February 17, her father, Shyamrao and brother Vinod, 18, consumed poison in their house and took their own lives in a joint suicide pact. That was only two days before a prospective groom was to come to finalise the marriage alliance. 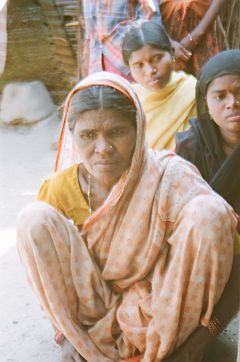 Widow of Shyamrao Kinnake, and her daughter (seen behind her). Pic: Jaideep Hardikar.

Shyamrao, who tilled three acres of land, was in debt. And Jyoti's marriage was a worry. The moment he gave in to his tensions and consumed pesticide in his hut, a harried Vinod, his eldest son who shared his burden of loan, did not hesitate to follow his father. Within a span of ten minutes, both became part of the list that now gets an average three to four names added to it every day in Vidarbha.

"What do I say? What do I do?" Shyamrao's hapless widow Sugandhabai cries in Umri village, off Kalamb-Ralegaon road in Yavatmal. The tribal family has been under pressure for some time. But the daughter's marriage was the last straw.

Sugandhabai says: "The father and the son looked after the household needs and farming, both of them were worried for some time, but never told us anything."

Jyoti's face wears a feeling of remorse and untenable guilt, of being central to the family's problems. Her second brother, Ganesh, 16, suddenly looks burdened by the tragic turn of events. He finds himself inheritor of loans and responsibilities.

This was the first time a farmer father-son committed suicide together, and it's one of the growing indications that Vidarbha is an agrarian volcano today. By next Diwali, it threatens to erupt, if the governments in the state and Centre continue to ignore the grim realities. Its special package rhetoric of giving credit to farmers at six per cent rate comes with a rider. Only those who repaid loans by March 31 were to get the benefit. After that deadline farmers would pay regular 12-13 per cent interest. That put thousands of cotton farmers in a fix. Most were not going to be able to meet the deadline, and thus expected that they would fail to avail the benefit.

Banks and cooperative societies won't find them credit-worthy in the fresh credit cycle this May.

Says Sudhir Goyal, divisional commissioner (Amravati): "The loan recovery rate by March 31st every year is always dismal in Vidarbha; it would remain so this year too." Goyal expects only about 20 per cent recovery by that deadline. Which means, a whopping 80 per cent bank loans would not get the low interest benefit.

Farm activists say good or bad, farmers can't repay money this year. Cotton yield was average (about 180 lakh quintals) as against the claims of a bumper harvest. Farmers did not get good yield or prices. The net income thus dwindled further. So, as the fresh credit cycle approaches this May, farmers are in lurch again. Far more families are defaulters this year than ever. Last year the banks extended the loans to about eight lakh households, up from four lakh families after the Prime Minister Manmohan Singh, announced an increased flow of credit. More families came into institutional credit, but with no raise in income, a whopping 80 per cent of them would turn defaulters. Banks and cooperative societies won't find them credit-worthy in the fresh credit cycle. Obviously, summer would be more despairing, when the families need cash in hand to buy seeds and inputs.

Like many other villagers, the Kinakes' income this year was nil. And this was, as one of the state government's own door-to-door survey suggests, among the one-lakh households in Vidarbha with daughters of marriageable age. The same survey finds 75 per cent of the 17.64-lakh cotton farm families in "acute crisis."

With no income, the Kinakes naturally sunk in despair when it came to fixing Jyoti's marriage. For the rest of the Umri village, it was poll time this past month. Flags of parties fluttered, and paid-volunteers drenched in booze were all over as rural Maharashtra went into the Zilla Parishad elections. There was no time for the rest of the village or leaders to ponder over the death of this father-son duo.

"We earned only what we had put in," says Sungandhabai, who also works as labourer. It's a general Vidarbha story. You earn as much as you put in. Cotton is unviable, non-remunerative and now, dangerously explosive. The widow had no idea of the mounting pressures. "The father and son did everything, we have no idea of loans," says the widow, who's yet to come to terms with the double blow.

In families after families, distress levels are rising, incomes are dwindling and all the support mechanisms are weaning.

Says Rajesh Gainar, a Darwha Panchayat Samiti agriculture officer: "Unless they break free from cotton, farmers have a little chance of improving the incomes." He says cotton acreage must be brought down by at least thirty per cent.

Meanwhile, the suicide toll in the six districts of Vidarbha from January 1, 2007 has crossed 250, according to Vidarbha Jan Andolan Samiti. The toll was 1044 for 2006. But, the suicide rate is declining, claims Chief Minister Vilasrao Deshmukh. "It is down to 25 per cent from 75 per cent last year," he told reporters on his way to rural Vidarbha to address poll rallies earlier in March. Meaning, of every hundred farm suicides, only 25 are due to indebtedness. Remaining 75 per cent are due to "personal reasons," the CM inferred. "It's only a media hype," he claims.

Sure, the official suicide rate is on the wane, but not the suicides, per se. "The government rate of rejection of farm suicides-due-to-distress is growing, and that is why the official rate of suicides is declining," charges Kishor Tiwari of the VJAS. Take for instance Shyamrao and Vinod Kinake's case  in official parlance, their suicide has not yet been acknowledged as inevitable fallout of the crisis.

Like the one by Namdeo Shankar Jichkar in Hatgaon, near Darwha. The 30-year-old took his own life in September, last, when the floods wrecked his farm.

The government doesn't factor in loans taken from private moneylenders as loans when it conducts an inquiry.

So, Namdeo's suicide is genuine, but "not one that could be linked in any way to the crisis."

Namdeo's father, Shankar, had orally distributed the land among his four sons. Namdeo got his share of three acres. With that, he also got his share of past loans that his father owed to banks and money lenders. Inheritance of loans is automatic, and the burden falls on the family - either the widow or the son has to pay it. When the floods devastated his cotton crop irreparably, Namdeo left the world, his wife, and infant, Om.

The government enquiry didn't find Namdeo a farmer at all. For odd reasons, he was not a farmer yet, because he didn't own the land. Two, he did not have any bank loan to his name, one of the several criteria to figure in the government lexicon of crisis-driven suicide. The government doesn't factor in loans taken from private moneylenders as loans when it conducts an inquiry. So, Namdeo's suicide is genuine, but "not one that could be linked in any way to the crisis." Forget the suicides of the Kinakes or Namdeo, as the CM believes, everything is fine; these are mad men dying for a little fun!