A meticulous initiative by an NGO in remote tribal districts of Odisha has brought women from the local communities together, enabling them to wrest their rights and entitlements under laws such as the FRA and MGNREGA. Abhijit Mohanty writes on the project.

India's forests are home to millions of people, who live in or near the fringe areas of the forests. These communities have developed a close symbiotic relationship with their habitats. While forests have provided them sustenance in the form of water, grazing grounds and land for shifting cultivation, the communities in turn have protected and preserved the forests and the wildlife therein, evolving indigenous traditions and rules of governance that have ensured equity and ecological sustainability.

However, historically, their rights on their ancestral lands and their habitats have not been adequately recognised despite the existing Forest Rights Act (FRA) 2006 that was envisioned to enable the legal framework for pro-poor institutional reform in the governance of the country’s forests.

But while pro-poor laws in themselves were not always able to achieve the objectives in spirit, sustained intervention by an NGO Agragamee in the remote tribal villages of Odisha seems to have covered considerable ground in streamlining the FRA and other acts and schemes, prominent among which is the National Rural Employment Guarantee Act (NREGA/MGNREGA).

More significantly, such efforts have gone a long way towards empowering the rural and tribal women of these areas, who had been fighting multiple demons in the form of illiteracy, lack of alternative employment opportunities, and absence of financial security in terms of land or property.

“The silent work of crores of women in this country upholds the Indian economy. Behind this ‘culture of silence’, rural and tribal women carry on their ceaseless work, underpaid and unrecognised. Women constitute 85 percent of agricultural labour and contribute 66 percent to agricultural productions. But, after more than two decades of economic reforms, only 7.3 percent are land owners, and only 1.5 percent women have their bank accounts. Almost all of them live without any form of social, economic and nutrition security,” points out Vidhya Das, Joint Director of Agragamee.

And so, it was with the objective of empowering these women at the grassroots level that the NGO, with financial help from various organisations like Welthungerhilfe, Germany and Christian Aid, United Kingdom, built its programmes with a multi-pronged approach.

The primary aim was to help local women build on their strengths and find a voice of empowerment for themselves and their communities, based on knowledge and comprehension of their rights, privileges and constitutional guarantees.

The Agragamee model sought to groom the women to be local change agents, ensure that they had a forum to voice their genuine concerns, and get these addressed through policy advocacy at the governmental level.

Agragamee conceptualised the Mahila Mandal, a community-led advocacy platform in relatively smaller villages, with an average of around 50 households in each. One woman from each household becomes a member of the Mahila Mandal. The Mahila Mandal meets regularly to deliberate on issues faced by the community, and thereby arrives at and executes action plans for addressing them.

The form and content of the training programmes, and the action points are decided and designed by women from the communities. For example, members of the Mahila Mandal may be trained in the process of filing applications/complaints to various line departments and officials in the government.  The training programmes are thus dynamic as well as participatory, and depend significantly on local officials as resource persons. In the process, women in the villages are empowered, economically and politically.

Apart from deciding on the village action plans, a Maha Sangha designs its own annual action plans and mobilises mass action for demanding rights under various government schemes and programmes at the block and district levels.

Between 2009 and 2014, a total of five Mahila Mahasanghas and 120 Mahila Mandals have been formed and capacitated.

In addition to the Mandals and Mahasanghas, Agragamee also conceived of and established three Women Resource Centres (WRCs), one each at the Kashipur, Dasmantpur and Thuamulrampur blocks of Rayagada, Koraput and Kalahandi districts respectively. These WRCs are designed to provide a place where women can get advice, guidance and support for the problems they faced.

A range of forms are available in these centres such as ones pertaining to job demand and job card applications under NREGA, forest rights claims, pension applications etc. The WRCs help the women to fill these forms, or write complaints and facilitate meetings with the block and district officials.

Catering to clusters of 15-20 villages within a radius of 2 to 5 km, the WRCs are managed and facilitated by young girls from the community, who have emerged as ‘change agents’. They are able to communicate effectively, advise and guide members of the local community, and also facilitate the process of applying and petitioning whenever there is a need.

These initiatives have played a huge role in ensuring that the benefits of legislation and schemes actually do accrue to the poor, especially the targeted beneficiaries of the FRA and MGNREGA.

It was only after a series of sensitisation camps and training that issues arising under the FRA were taken forward by the Mahila Mandals and Mahila Mahasanghas in 140 villages. Applications have been submitted for land rights by more than 5000 households to date.

Though, these claims initially received poor response from the Sub-Divisional Level Committees (SDLC) that are supposed to look after the issues, women have persistently petitioned and connected with the line departments to ensure that they get their due entitlements.

The WRCs have helped the women groups to write complaints, and facilitate meetings with the district collector, who is the chairman of the SDLC. As a result, a total of 1880 individual forest right (IFR) claims under the FRA have been settled till date, amounting to 4462.10 acres of land.

Out of these 1880 IFR title deeds, a total of 494 claims were settled in favour of women-headed households, marking significant progress in the struggle for women’s land rights.

Around 2500 acres of land were settled through community forest rights under the Act, claimed by 75 Mahila Mandals. The Mahila Mandals also demanded to check wanton destruction of the common lands and allow the regeneration of natural vegetation which would provide essential firewood, fodder, fruits and timber for the entire community. Now, the vibrant patches reclaimed have been revived with fruits and firewood trees. Green fencing and income-generating plantation has inspired the entire community to protect and conserve the natural resource base.

Once the claimed lands are obtained under the FRA, the beneficiaries are encouraged to apply for housing under the Indira Awas Yojana. As a result, 685 FRA beneficiaries in all have got housing support under the scheme till now, and more are expected to get it soon.

Lands settled under FRA have also been developed through MGNREGA, thus leading to the attainment of both land entitlement with livelihood empowerment.

As soon as the dream of securing forest land in their names was realised, women organised themselves to develop the lands secured. In some places they did it with collective ‘srama dan’, and in some places with the help of the annual panchayat plan on MGNREGA work. 70 villages submitted job demand applications under the MGNREGA, out of which 45 received positive responses benefitting nearly 1500 poor families. 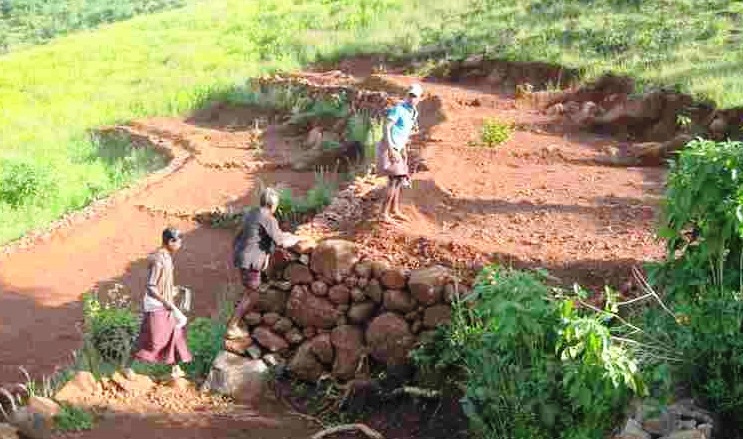 A very happy Utta Muduli of Gunar village in Koraput district says, “We had often met with the BDO and District Collector and lodged complaints to expedite the process of distribution of title deeds to the claimants. Finally in 2011, all the 48 claimants of Gunar village got their individual title deeds under the FRA, amounting to 58 acres of land. After the claimed lands were settled, we applied for jobs under the MGNREGA, and developed those lands through labelling, stone and earth bonding. This has conserved the top soil run-off during the rainy season and simultaneously increased the productivity of the soil as well.

Similarly, in Chandragiri panchayat of Rayagada district, once FRA claims were settled in two villages of Yugbasa Kebidi and Dandabad of Kashipur block, the villagers from the former applied to the block office to develop the forest land. The work order was sanctioned and villagers got employment for twenty days.

Later, however, the government delayed the payment for the job done and kept postponing the date. Finally the women of Yugbasa Kebidi Mahila Mandal came together and wrote a complaint to the Block Development Officer (BDO). This too yielded no effect, and the women finally gheraoed (laid siege to) the Block office and sat on a dharna (sit-in protest). Upon that, the BDO was forced to accept their rightful claims and admitted the bureaucratic system failure; finally Rs. 298,000 was released towards the payment of wages.

When the issues of irregularities in award of MGNREGA work and delayed payments came to be a regular phenomenon, the Mahila Mahasangha hit the roads with their protest. Several public hearings were also organised at Rayagada, Koraput and Kandhamal districts where the local people presented their testimonies – bringing to the fore ground realities such as late payment, lack of work opportunities and various forms of corruption under the MGNREGA to a larger forum. All these have had a ripple effect.

“Where is the beauty of success if the journey is not treacherous?” goes a common adage. With each impediment faced, women in these villages have taken firmer steps to address the issue of social exclusion and to get access to resources meant for them. The initial success, the energetic response and positivity from the tribal communities have given Agragamee the necessary plank to help raise the issues at proper forums and advocate policy-friendliness and transparency at grassroots level.

The author is Programme Coordinator at the State Resource Centre for Adult and Continuing Education (Agragamee) in Rayagada, Odisha. He works in the areas of literacy, rights-based advocacy and social research.