UR Ananthamurthy's brutally honest stance on Brahmanism, or in fact on any of the subjects that concerned him, has been fiercely debated in his life and death. In a tribute to the recently deceased stalwart of public thinking, Prakash Belawadi seeks to find clues to his inquiring spirit.
25 August 2014 -

In the previous era of journalism, when there were no TV news channels and only a few newspapers and magazines, it often seemed as if journalists simply wrote to each other and not for the readers. There were occasions when the combat between journalists covering the same beat for rival papers got so deep and personal that if one broke a news story, others would write stories trying to trash the scoop on facts and slant, confusing the readers, adding to the noise. That is how it seemed with UR Ananthamurthy and his intellectual peers, critics and admirers.

It all got so personal right through his public life, especially when it concerned caste, faith and ritual that critical opinion became not a part of the larger discourse but rather a quarrel within communities and cabals. He has not been spared even in his death.

“Born a Brahmin myself, hurting the feelings of Brahmins has only been inevitable and not something that I have enjoyed doing.  My stories Samskara, Ghatashraddha and Bharateepura have caused distress to many Brahmins. Not only has it caused distress, it has also angered them,” he wrote once. (This and following quotes, unless specified otherwise, are from ‘Me, as a Brahmin’ by UR Ananthamurthy, Translated by Deepa Ganesh,  JOURNAL OF KARNATAKA  STUDIES – NOVEMBER 2004 – APRIL 2005). 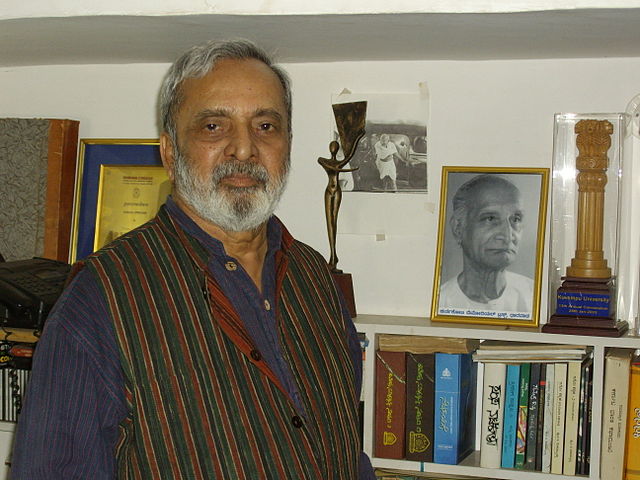 Udupi Rajagopalacharya Ananthamurthy, Jnanpith awardee and a stalwart of the literary world and public thinking, passed away on Friday, August 22, 2014. Pic: HP Nadig/Wikimedia

But the writer acknowledged the pressure he felt from peers, his intellectual rivals and groupies, aligned for and against him. He wrote, frankly and brutally, in his way: “There is another reason why I hesitate to criticise Brahmins these days. Non-Brahmin intellectuals see this as a Brahmin ploy. They are highly suspicious about it and believe it is a clever Brahmin’s strategy to gain popularity in non-Brahmin circles. Let them see it any which way, so what, I tell myself."

But he couldn't remain immune. "Community opinions begin to gradually affect our thinking. For most, it has become an extremely difficult task to perceive issues of caste with any kind of transparency. This is the problem that plagues intellectuals of every caste. The thief’s mind is sour with guilt. The sourer the mind, the more sugar-coated the words get,” he wrote.

He cited an instance of an encounter with “a mild-mannered, extremely hospitable woman” in Davanagere, Karnataka, who had served him lunch. She had sought a private moment with him as he was preparing to leave and told him: “Nobody likes us anymore. Why do you poke fun at us? If you had ridiculed members of the other castes would it have been possible for you to survive it? Because we endure even when people sneer at us, everybody chooses to ridicule us. Is that the right thing to do?”  I have heard this myself and often enough, from friends and family members.

Ananthamurthy once said, ironically: “The only Indian leader anybody can attack without fear of bodily harm and serious retaliation is Mahatma Gandhi.” If I could take the liberty of paraphrasing that, I could replace ‘leader’ with ‘caste or community’ and ‘Mahatma Gandhi’ with ‘the Brahmin community’. But URA would have disagreed.

He didn’t agree with the Davanagere lady either, but he had confessed to being embarrassed by her direct questioning, had tried to cover it up: ”What we have written are works of literature, they are symbols.”

But where Ananthamurthy breaks through, transcends the incestuous liminalities of the intellectual quagmire, is in his appreciation of the woman: “She understood my difficulty, and felt sorry that she had subjected me, who had gone to her house for lunch, to such a predicament. I couldn’t gather courage to say that what I wrote was the crucial truth that Brahmins had to face. I think we become writers because of such hesitations. And I think we seek cover under symbols precisely for the same reason.”

This was more than intellectual humility and personal honesty. This was a call of the insider, to his ‘own people’, Brahmins, to see with a clear mind the danger, not of affection for one’s own caste, but rather the contempt of another’s.

As he put it: “This, however, is not a danger that springs from an innocent individual who completely believes in his caste and lives a life within it; but a danger from an individual who declares that casteism is bad, but views people of all other castes, except his own, with enormous suspicion... The world of naïve believers of caste is limited; their intentions are clear; their cruelty towards the lower castes is clear... The dangerous ones are those who still hold on to caste even after giving up caste-related professions.”

The Brahmin groups that had opposed and ridiculed URA when he was alive, that continue to do so now when he is dead, did not (and are yet to) see the “critical insider” in him, as someone who could continue to be inside, but also seek change – like Mahatma Gandhi. The anti-Brahmin groups that have alternately admired and abused URA for his extant 'Brahmanism' have seen this as his opportunism or, worse, hypocrisy.

But the inspiration he found in religion and its moral, political purpose, in fact, came from Mahatma Gandhi and Ram Manohar Lohia: “Gandhiji’s Dandi and Navakhali marches are also bold expressions of the latent spiritual aspirations in man. When Lohia said if religion is eternal politics, politics is present day religiosity, one finds in these words the vision of a spiritual desire for equality. It is the responsibility of religions to get an individual accustomed to a system.”

He saw this not only as a “constant process,” but also as one loaded with conflict and contradiction:  “In this, there is both good and bad. In this need to acquire adaptability there is also the danger of getting into a groove, and so to shake oneself, from time to time one needs political struggles. It is here that an individual’s true religious desires get expressed.”

He addressed his ‘own people’ in more direct terms: “For a Brahmin, who lives his life with the belief that all inequalities are the fruits of Karma..., considers unthinking observance of ritual as prayer, and mistakes survival strategies for profound intellectualism, the true lease of life comes when he takes part in movements for equality. Otherwise, religion becomes a mere trade; an occupation for economic gains.”

Ananthamurthy dealt with his other, equally profound, identity of ‘Kannadiga’ with the concern and creativity that so strikingly informed him, managing a negotiating space between chauvinism and a blind surrender to the English language, bringing religion, human dignity and politics into play.

When there were attacks on churches in coastal Karnataka in 2008, his comment appeared in a popular blog, criticising the BJP government, which he believed was complicit: “The Christians in the past had made contribution to the development of modern Kannada. Rev Kittel who composed the first Kannada dictionary was one of our revered ancestors. The Christians continue to run hospital and schools. Most of the gentle and caring nurses in hospitals are Christians.”

In his typical forthrightness, he had asked: “Who converts to Christianity?” He went on to answer himself: “Mostly those who come from low castes and feel ashamed to reveal who they are and what caste they belong to. Christianity gives them a respectable identity and they may be tempted also with jobs and money. If we had a great saint like Narayana Guru of Kerala born into a low caste who took to reforming the decadent Hindu society, there would have been no room for Christians to convert low -born Hindus. Narayana Guru was an advaitin, perhaps the greatest advaitin after Adi Shankaracharya.”

Here then was the ultimate insider of Sanatana Dharma, caste-based Hinduism and the Kannada language, of writing and the public intellectual space, so implicitly and intuitively inside that he could say: “Attacking people who are praying to whatever God is the most irreligious act on the part of Hindus. The Sangh Parivar is destroying Hindu civilization.”

If only we could see him, within ourselves and as ourselves, as he was able to, with the disapproving woman of Davanagere, affected by her but not agreeing, it would be easier to love ourselves and the supposed other. But for that we must have the courage to amplify what goes on inside our heads rather than offer politically correct bluster to the microphone in the face. Because there is so much noise and confusion inside, so much going on there.

Why are we so keen to dole out moral certificates?

Our Health, Our Initiative
MORE ARTICLES
on similar topics ...
CASTE