They forage the city, collecting and sorting often hazardous waste when the city sleeps and by day they are gone. Most of them are women and we have no long-term policy in place that looks at their welfare or health, writes Kalpana Sharma.
27 June 2010 -

Oil and water do not mix, as the Americans are being forced to accept with the tragic oil spill from a British Petroleum oil rig in the Gulf of Mexico. For almost two months now, the struggle to cap the oil well and protect large sections of the country's coastline from being devastated has been the top story in the news and the major concern of the US administration.

It is an environmental crisis of gigantic proportions, and purely man-made. Whether in the long-term this will compel Americans to think again about their dependence on fossil fuels and seriously embark on the path of scaling it down and encouraging alternatives remains to be seen. At present, one finds little expression of this in the discussions around the oil spill.

On a much smaller scale, and not so dramatic, was the 'accidental' exposure to radiation that affected workers and waste collectors in Delhi a few months ago when they handled radioactive material. At the time when this unfortunate incident took place, the issue of waste disposal, particularly hazardous waste, made the headlines. Follow-up articles were written. The lives of those who live off collecting and sorting waste came into our line of vision. But then the issue disappeared.

Every now and then we keep reading similar horror stories linked to waste disposal such as the one about the garbage mountain in Jawaharnagar near Hyderabad, where three waste collectors were buried under heaps of garbage. The body of one of them, a 15-year-old boy, was retrieved. But the body of a woman also buried was never traced.

Long term policies that ensure that the safety and health of those who do such an essential job - "a community of silent environmentalists" someone called them - are not such a high priority any more. One reason is that the people affected are virtually invisible. 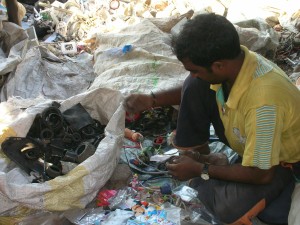 Millions of waste pickers risk their lives and their health every single day. This is an on-going environmental issue that requires as much attention from ordinary people, the media and policy makers as the larger macro issues.

•  Twilight City
•  Adding the fourth R
•  Whose garbage is it, anyway?

Waste collectors around India work silently, often late into the night, sorting out mountains of waste, foraging for anything that can be sold. If you walk down some streets of central Mumbai after 11 at night, you will see an army of waste collectors. Men, women, children are all hard at work. They work through the night and finally manage to get some sleep on the doorsteps of the shops on those streets. By daylight they become invisible, having stowed their belongings in boxes behind the signs of the shops on whose doorsteps they sleep. These are the people of the night, not noticed by those who inhabit the areas in the day.

Studies have revealed that 90 per cent of the women waste pickers are primary bread-winners, often widowed or deserted. It is interesting how the sexual division of labour plays out even in the business of waste. While women, and children, do the more hazardous job of sorting and separating the waste, the men deal with the dry garbage, which they transport to wholesalers and factories. As a result, it is the women who are exposed to hazardous waste - none of them wear any kind of protective gear - and also face the physical problems of constantly bending and carrying headloads of the waste. Look at any group of waste collectors and you will spot the bent old women who have been performing this function for decades.

In the slum-city of Mumbai, waste collectors experience the most acute degree of homelessness. While poor people in other kinds of jobs somehow manage to find some shelter in a slum, irrespective of whether it is legal or illegal, waste collectors sleep next to the garbage they have sorted. This is their "wealth", something they have to protect after they have collected and sorted it until they can monetise it. Hence, near many garbage dumps, even in the better off localities of cities like Mumbai, you see families of waste pickers asleep in the morning. And most often you see only women and children.

As a result of advocacy and campaigns by civil society groups, many cities have now recognised the work of waste collectors and given them some legitimacy. This is an important step but it is clearly not enough. The issues of safety and health have also to be addressed even as their contribution to the city and the environment is recognised.

Why bring up waste collectors at a time when the main environmental issues being debated are the larger issues of global warming, or environmental disasters such as the oil spill in the Gulf of Mexico? Because you cannot speak of environment without considering the impact on the lives of people. We have hundreds of small-scale and continuing environmental disasters taking place all around us. But we overlook them so long as they do not impact our lives or our lifestyles.

Millions of waste pickers in India, who play a crucial role in dealing with the perennial environmental crisis of waste, risk their lives and their health every single day. This is an on-going environmental issue that requires as much attention from ordinary people, the media and policy makers as the larger macro issues.

Vulnerable to more than the virus
MORE ARTICLES
on similar topics ...
ENVIRONMENTAL HAZARDS