No space for women

If women cannot step out of their homes and offices without the fear of being assaulted for no other reason than their gender, then clearly there is something very wrong, writes Kalpana Sharma.
27 June 2012 -

Looks, they say, can be deceptive. At first glance, Kerala's capital city, Thiruvanananthapuram, is not just incredibly green and beautiful but also clean. The latter, in particular, seems a singular achievement given the monuments of uncleared garbage that mark practically all cities, big and small, in India. Yet, open a local newspaper and you read about malaria and dengue, hospitals spilling over with cases and politicians almost coming to blows over the garbage crisis.

"So where is the garbage?" I ask the taxi driver. "It is dumped on the inside roads", he informs me, so that casual visitors like me will not see the ugly sight.

The garbage crisis in Thiruvananthapuram has reached epic proportions. In a state where there is little uninhabited space, creating dumpsites for urban waste has become a challenge. People living in villages such as Vilappinshala near the state capital are refusing to allow dumps or waste processing plants to come up in their vicinity. Not in my backyard, they are saying. So whose backyard will handle the increasing tonnage of urban waste? That is a question that all cities will need to ask - and resolve.

But just as Thiruvananthapuram's surface cleanliness hides the true story of uncleared garbage and the spread of disease, the experience of women in Kerala also stands out in marked contrast to the popular myth about their status. 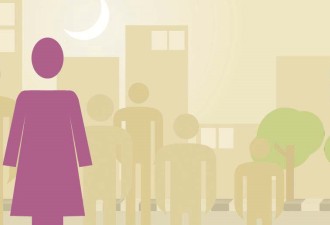 Notwithstanding all the other indicators of progress for women in Kerala, ask them whether they feel safe, and they will tell you a story that speaks of disempowerment, of helplessness, of anger.

We all know that there are more women in Kerala than men - an exception in a country where girls are being eliminated before they are born. We also know that women in Kerala are more educated, have longer life expectancy, and get married later than women in the rest of India. Yet, ask them whether they feel safe, and they will tell you a story that speaks of disempowerment, of helplessness, of anger.

Sakhi, a women's resource centre, and several other women's groups set out to survey women's perception of safety in public spaces in four cities in the state - Thiruvananthapuram, Kozhikode, Kochi and Thrissur. Their findings blow the lid off the myth about the power of women in Kerala.

The overwhelming majority of women surveyed in these four cities said that sexual harassment was their main safety concern. They routinely experienced verbal and physical harassment. Buses that the majority of working women are forced to use were a primary site for such harassment. Women passengers were groped, pinched, leaned upon. Apart from male passengers, even the conductors took their chances.

Girl students in particular had a torrid time. One student reported how someone who stood behind her sliced her dress from top to bottom with a sharp instrument. Another spoke of the abusive language used by bus conductors. Other women talked of being leaned upon, about men "accidentally" falling on them when the bus took a turn, of men using every opportunity to touch parts of their bodies.

Auto-rickshaws were not a particularly happy alternative as auto drivers would refuse women a ride much of the time and especially in the evenings when they most needed it. In any case, most women said they did not feel safe venturing out after dark.

While women in many cities have to suffer this kind of daily assault, what was striking was how most women felt unsafe in public parks, beaches, theatres and even standing at ticket counters. Cities like Thiruvananthapuram have beautiful parks that would be the envy of people in cities like Mumbai where we are starved for open spaces. Yet, in the verdant surroundings of Kanakakunnu Palace in the state capital, you rarely see women, or even groups of women. Men accompany the few that come there. My friends tell me that if a group of women decide to break the norm, they will be stared at as if they are entering forbidden territory.

Apart from the sexual harassment, for women the question of safety was also linked to the infrastructure in these cities. For instance, the majority of women complained about the complete absence of clean and safe public toilets. The few toilets available were filthy and almost routinely used by men. The approach to such public toilets was such that women would feel afraid to go anywhere near them.

Poorly lit roads, uneven pavements, open drain covers - everything that makes the public space difficult for the elderly, for children, for the disabled also impacts women's sense of safety. Here is an important lesson for urban planners. Make cities safe for women and the most vulnerable and they will be safe for everyone.

Ironically, even the women conducting this safety audit were harassed, stared at, touched, hit and followed. They also found it difficult to persuade women to speak about being harassed because of the dominant perception that only "bad women" get sexually harassed. Hence, the women being surveyed felt that if they admitted to being harassed, they would be considered "bad women"!

How women are treated in the public space provides a true reflection of women's status and how they are valued by society. You can educate women, give them health care and give them jobs. But if they cannot step out of their homes and offices without the fear of being assaulted for no other reason than their gender, then clearly there is something very wrong.