A medium in chains

Cinema and Censorship - The Politics of Control in India is a landmark in the world of books on Indian cinema on the one hand, and on the politics of control on the other, writes Shoma Chatterji.
31 August 2009 -

The word 'control' suggests a dictatorial form of order, one's freedom of expression is not actively denied, but nonetheless it simply does not exist, ensuring the same outcomes as active denial of the right would. And it is this different, but effectively the same, order that is explored in Someswar Bhowmik's Cinema and Censorship - The Politics of Control in India (Orient BlackSwan, 381pp.) This is a landmark in the world of books on Indian cinema on the one hand, and on the politics of control on the other.

Bhowmik quotes the veteran Polish journalist Ryszard Kapuscinski, "In a dictatorship, censorship is used; in a democracy, manipulation." Though this was said with reference to western experience and sensibilities, it would apply equally well to the climate that obtains in film censorship in India. The book puts forth an unbiased argument, explaining and analysing how this state of affairs - manipulation of filmmakers' rights to freedom of expression - operates. He looks at a variety of pressures that filmmakers face - from those who wield political power at the Centre and the States, from the members and board of the Central Board of Film Certification (CBFC, earlier called the Censor Board), and last but not the least, the public themselves.

The book covers every area of Indian cinema such as feature films in all languages, documentary films, docu-features made by independent documentary filmmakers, and even foreign films that came under the scissors of the CBFC. It is a critical, incisive, research-based analysis of the political factors that continue to dog the concept of film censorship in India by turning the CBFC into a stringed puppet influenced, dominated, pressured and controlled by ruling political parties. The arguments are often placed against the lack of censorship on television, throwing up questions of irony and contradiction.

Bhowmik, who obtained his Ph.D. on film censorship in India's colonial period, is currently Research Scientist with the Educational Multimedia Research Centre, St. Xavier's College, Kolkata. He has researched and written extensively on the sociological aspects of cinema and television in both English and Bengali.

The book, after a long preface by the author, is divided into nine chapters beginning with Mapping the Field and concluding with A Medium in Chains. The preface observes that film censorship was not the only inheritance of the system imposed by colonial period on post-colonial India; the police, military, intelligence, paramilitary institutions and the criminal procedure and penal codes are other such inherited machines. 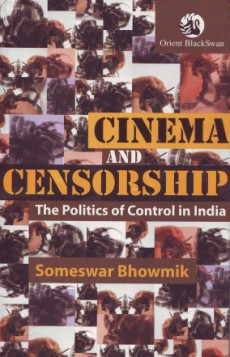 The book covers every area of Indian cinema such as feature films in all languages, documentary films, docu-features made by independent documentary filmmakers, and even foreign films that came under the scissors of the CBFC.

A Medium under Siege is a revealing chapter, detailing how censorship functioned in colonial India under the British, "particularly suspicious about any attempt by the Indians to assert a common public interest against British intentions." The chapter goes on to show how foreign films with 'disputable' issues and themes fell foul of the Indian Cinematograph Bill (1917) introduced in the two-tier Imperial Legislature in September that year. This became the Cinematograph Act 1918, which came into force in 1920.

In an interesting footnote, the author points out that the censors took a strong exception to Mazdoor (1934), based on a Munshi Premchand story and directed by Mohan Bhavnani in which Premchand collaborated in the screenplay. The story dealt with the conflict between capitalists and labourers and this made "the censors come down heavily upon some of the scenes of labour unrest." The film was finally cleared after two rounds of negotiation, with the footage reduced by almost 1000 feet and its title changed to read Daya Ki Devi!

The narrative then continues on from such pre-Independence foundations to censorship of films in independent India too, and the passage of the Cinematograph Act, 1952. This Act introduced the practice of awarding "A" and "U" certificates to films considered viewable by adult and all audiences respectively which sustains till this day.

Four other chapters, organised as a historical 'movements' spanning 1950-2006, argue that censorship is an organisation and instrument allowed to function only as and when it submits to political control by whichever party is in power at the central and state levels. The CBFC's guidelines amended up to May 1983, clearly laid down its three-fold objectives of censorship: (a) that the medium of cinema remains responsible and sensitive to the values and standards of society, (b) that artistic expression and creative freedom are not unduly curbed, and (c) that censorship is responsive to social change.

These objectives are in exercise of powers conferred by Section 5b(2) of the Cinematograph Act, and directions given by the Central Government for sanctioning films for public exhibition. But Bhowmik insists that these guidelines are practiced more in the breach than to the letter. He shows how CBFC's power has been rendered null and void in the face of interference by the Supreme Court, offering as example, Raj Kapoor's Satyam Shivam Sudaram (1978) that conceded the "ultimate censorious power" of the people over the CBFC without mentioning "the parameters and procedure for the expression of this people's power."

He goes on to underscore that the operation of the CBFC is not above board. Bodies such as the Film Certification Appellate Tribunal (FCAT) and Review Committee can easily over-rule the refusal of a certificate to a given film, as the FCAT did in the case of Maficha Sakshidar (1986) a Marathi film dealing with the sensational killings of the Joshi-Abhyankar families in Pune. (pp.254-255).

The chapter titled Politics of Film Censorship confines itself mainly to what happens when a film personality as famous and as 'liberal' as the late Vijay Anand chairs the CBFC, and filmmakers expect him to actually apply his experience, his liberal views and his 'freedom of expression' to seek "a possible liberalization of the canons of film censorship", but whose liberalization is limited to focusing on lifting curbs on explicit display of sexual graphics and visuals while at the same time, "does not show any inclination to even question, let alone disturb, the political implications of film censorship."

The reference here is to the long-drawn case of documentary filmmaker Anand Patwardhan's Jung Aur Aman which was refused a certificate by an examining committee attached to the CBFC, Mumbai that gave Patwardhan a list of deletions. Interestingly, this anti-war, anti-nuclear docu-feature that led Patwardhan to approach the Bombay High Court to seek redress, took place under three different persons at the helm of the CBFC - Vijay Anand, Arvind Trivedi and Anupam Kher.

The author points out that no state endeavour or action within censorship of films in our country is minus a political undertone. In the subsequent chapters, he lucidly illustrates the different manipulations of film censorship in India.

Bhowmik's focus is on how ruling parties influence, suppress, and overrule the rulings of the CBFC. But in this, he sidesteps issues relating to the portrayal of women in films, which has been a constant thread of censorship over the years. For example, under revisions dated 17 June 1981, the Board exhorted filmmakers to eschew the use of visuals or words depicting women in ignoble servility as a praiseworthy quality in women (Rule iv-a). The Board added that if mere cuts will not remove what is undesirable in the film, it should be refused a certificate.

What is "ignoble depiction of women", especially considering that women form half the Indian population? The answer, over the years, has been "whatever the political leadership of the day decides it is". The much-publicized cases of films like R K Nayyar's Pati Parmeswar (1989) and B R Ishara's Aurat ka Intaquaam (1984) come to mind, but these - or other such films where portrayals of women were manipulated by the CBFC - do not find sufficient mention in the book.

The CBFC refused to certify Ishara's film Rape because the subject matter was a 'sexual assault on women' treated 'in a vulgar and sensational manner.' Soon after, the film was granted an "A" rating with minor cuts. The title was then changed to Aurat Ka Intaquaam. The CBFC nonetheless granted a "U" to Hawalaat (1987) directed by Surendra Mohan, which included three graphically cinematographed rape scenes shot in slow motion and two titillating cabaret numbers.

Pati Parmeshwar too suffered at the whimsical hands of the censors. It was refused a certificate because it presented woman in a position of ignoble servility. It was allowed release after prolonged court cases. But another film, Benaam Badhshah (1991) directed by K Ravishankar, was easily granted an 'A' certificate and allowed public exhibition in spite of its reactionary theme, treatment, approach and plot. The film was the story of a girl who was raped on her wedding night by a mercenary rapist paid to rape her. Later, this girl came to live in the slum where her rapist lived with the sole intention of getting him to marry her! How this escaped the standards that Pati Parameshwar was subjected to, is inexplicable.

This is a much-needed book. Thus far, only a few authors have studied the subject because there are few books that exclusively address the problem of censorship in Indian cinema. The last noted book on censorship was Liberty and Licence in the Indian Cinema by Aruna Vasudev (1978). Gender and Censorship, edited by Brinda Bose, appeared in 2006; this book gives detailed accounts of the Board's war with filmmakers over gender issues. This book offers a model frame of reference on censorship of cinema in India for administrative heads, bureaucrats, filmmakers, scholars and students of Indian cinema.