In the tribal villages of Nandurbar district of Maharashtra, committed social workers are improving the health and lives of mothers and children by spreading awareness about the needs of women and girls. Dilnaz Boga brings you their stories.

Even though Maharashtra is among the more developed states in India, the benefits of this growth are unevenly distributed. Some regions have been underdeveloped, especially those with a predominantly tribal population. The district of Nandurbar is one of them, where 70 per cent of the population comprises Bhils and Pawaras, a majority of whom live below the poverty line. With one of the highest number of landless adivasi labourers, Shahada block is perhaps the worst affected both in terms of livelihood security as well as health outcomes.

Despite these challenges, a significant change is now underway. As part of a special maternal health intervention under the DFID-supported Global Poverty Action Fund initiative, undertaken by Janarth Adivasi Vikas Sansthan (JAVS), a local non-government organisation and Oxfam India, an empowered and socially responsible force of barefoot auditors, or Gram Arogya Sakhas, is hard at work in 35 villages, motivating women to eat better, get their pre- and post-natal check-ups done on time, go in for institutional delivery and immunise their children.

Jagu Pahar, 43, is one such barefoot auditor, saving the lives of mothers and newborns. This former sarpanch (village head) of Vagharda, 25 kilometres from Shahada, is convinced that healthy mothers and children can ensure a better future for his community – an attitude that makes him perfect for the task that Janarth and Oxfam India have hand-picked him to do.

According to Preeti Bohidar, Project Officer-Health, Oxfam India, Raipur regional office, “Today, maternal health is a key challenge, especially in the rural areas where poverty is stark and resources hard to come by. While the National Health Mission, the government’s flagship health programme, has introduced several schemes that promise incentives and facilities to improve the situation, a glaring lack of awareness in the community at large and among women, in particular, with regard to their basic rights and entitlements often has disastrous consequences for them. In Nandurbar, it’s the barefoot auditors, who have been successful in filling the crucial information gaps ever since they started work under the project in 2012. The barefoot auditors have received training from Janarth to help them understand the issues better and carry out their work effectively.”

For healthy and safe motherhood

So, what exactly does a barefoot auditor do? “S/he forms a crucial link between the community, the non government organisation and various government departments. Their main responsibility is to spread awareness on the various schemes and facilities available to pregnant and lactating women and to push the community to involve itself in ensuring that the health needs of its girls and women are met properly. After all, only rigorous community action and monitoring can effectively reduce the risks over time. Each of the project villages has one barefoot auditor, who is passionate, outspoken and someone the locals look up to. Most are at least semi-literate,” explains Ranjana Kanhere, Executive Director, Janarth.

As a barefoot auditor, Pahar not only meets all the above personality attributes but has also been able to fulfill the responsibilities given to him. He learnt the ropes during the training sessions that were conducted in 2013 by Dr Mohan Deshpande of the Pune-based Arogya Bhan.

Pahar elaborates, “We were informed about our rights, the schemes we are entitled to and how a government hospital functions.  The sessions enabled me to identify five children who were suffering from malnutrition. I was able to make sure they got vital treatment and diligently followed-up with the Primary Health Centre [PHC] at Shahada as well.”

Pahar’s efforts have borne results. Since he took over as Vagharda’s barefoot auditor in 2013, there have been no maternal deaths or deliveries at home. He says, “Using illustrations I explain concepts to people. I make a note of the number of pregnant women in the village and talk to them about eating right and taking the necessary precautions. I even ensure that they get the diet and the monetary incentives they are entitled to under different government schemes. So there’s an overall improvement in the maternal health indicators here.”

In the neighbouring hamlet of Bhute, these days, women do not hesitate to turn to Manga Thackeray, 55, for health-related advice. Along with his niece, Bharati Udaysi, who is working with Janarth as a local activist, this barefoot auditor has been able to motivate the people to stand up together to secure their rights.

During the early days of the intervention, however, Thackeray had faced stiff resistance to his “new-age ideas about child birth”. Over generations, tribals have been following certain customs that may be detrimental to the well-being of the mother and child but the elders insist on sticking to them. “Take the practice of not eating enough during pregnancy simply because they don’t want the baby to grow too big. They fear the delivery would be extremely painful. I had to sit with them and clarify why that was not good for them or their infants,” elaborates Thackeray.

Ensuring immunisation was the other major hurdle. Says Udaysi, “My uncle, our Accredited Social Health Activist (ASHA) and I have had to make several home visits to convince them. Even then mothers-in-law used to constantly interfere and say that since they didn't immunise their kids so there was no need for their daughters-in-law to do so. We had to patiently hear them out and then answer their queries till they were convinced.” 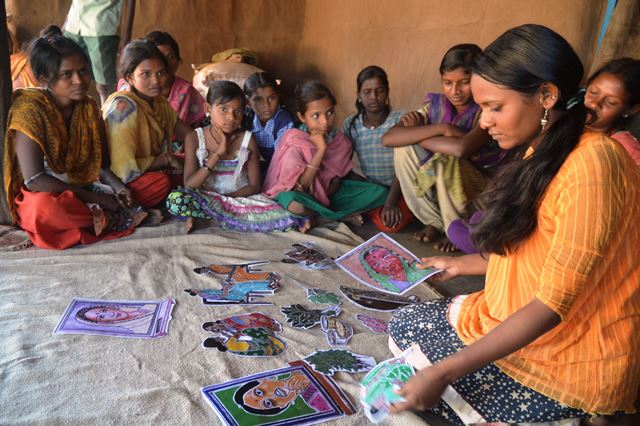 There has been a visible change. “Nowadays, they approach either me or Bharati for assistance and we not only give them the necessary information but also put them in touch with the ASHA. Consequently, the number of deliveries taking place at home has reduced,” states Thackeray.

Speaking with Laxmi Barade, a shy tribal woman from Bhute, gives an idea of the kind of trust Thackeray and Udaysi have created for themselves in the community. “I know more about sanitation and nutrition thanks to Manga ji. Due to my regular interactions with him and Bharati, I have realised the importance of consuming leafy vegetables. They give us iron supplements that help build immunity and are essential for the growth of the child. Most women in our village suffer from malnutrition and anaemia as our staple diet is chillies and bhakri (flat unleavened bread); it isn’t a balanced meal but we used to eat it anyway not realising its impact on our health. That’s not the case anymore,” she says.

Thackeray, who is also a sugarcane and cotton farmer, is happy that he has managed to bring about a perceptible change in the way his people approach and access health care. “There were so many difficulties but I decided to persist. Right now the awareness levels are so high that if anyone sees a villager being ignored at the Primary Health Centre, they step up and voice their concern to the doctor in-charge. Personally, the training changed my outlook as well. I don't fear anyone anymore as I know our rights. In case of a serious problem, approaching the Collector, too, does not look daunting,” he signs off with a wide smile. (© Women's Feature Service)