The new class VII social science textbook in Kerala has become the cause of clashes. Groups agitating against the book allege its content is anti-religion, while the state curriculum board says it propagates religious tolerance. P N Venugopal reports on the controversy.
15 July 2008 -

The south-west monsoon has been very weak this year in Kerala. But monsoons apart, a furious storm is blowing across the state in the form of an agitation for the withdrawal of the social science textbook prescribed for class VII students. Those who are on the warpath include the Kerala Students Union (KSU), the students wing of the Congress party, the opposition United Democratic Front (UDF), the Bharatiya Janata Party (BJP), the Christian church and organisations, the Muslim clergy and organisations and the Nair Service Society (NSS), a dominant caste organisation.

They allege that the book has objectionable content, it propagates atheism, it is 'anti-religion' in approach and that its agenda is the promotion of communism among the young.

The much-debated passage occurs in the second chapter of the textbook introduced this year on the basis of the new curriculum adopted by the State Council of Educational Research and Training (SCERT). The passage describes the admission process of a child, Jeevan, to the first standard. 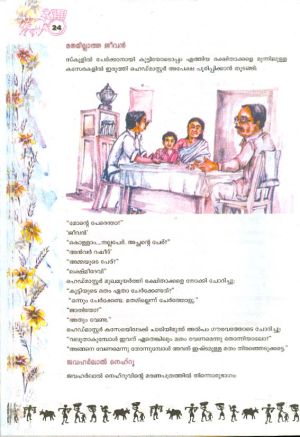 The Hindu-Muslim parents of the child do not want him to have any religion. He can choose his religion if and when he feels so is the father's reply to a query by the headmaster regarding the future, when the child grows up.

The antagonists allege that this in itself is a negation of religion as each one is born into a religion. Education minister M A Babys counter argument to that is that the accent of the textbook is on religious diversity and tolerance.

The chapter begins with the pledge India is my country. All Indians are my... But then it surprises the reader by juxtaposing a paper cutting with the heading Dalit burned to death for drawing water from the public well. The lesson then poses the question why such things happen and discusses discriminations on the basis of caste and past practices by excerpts from the memoirs of eminent personalities.

The next unit takes the students through various reform movements that swept through Kerala in the second half of 19th century and the first half of the 20th. Then comes Jeevan, the boy who has no religion, and this is followed by a quote from Jawaharlal Nehru's last testament: I do sincerely desire to declare that no religious ceremony be performed for me after my death.

Next we get quotes from the Mahabharata, Bible, Prophet Mohammed and Guru Nanak extolling mutual love and respect. And then the lesson winds up with a master stroke: Members of which religions are more affected by the problems mentioned below?

The children are also asked to write a note on a situation in which a child belonging to a different religion flees his native land because of communal violence and takes refuge in their house.

The debate over the issue, ironically enough did not begin in the classrooms or in discussion halls, but on the streets, when activists of the KSU stormed into the district offices of the education department and vandalised public property and stoned police persons. The police retaliated and violence reigned for almost ten days.

The first chapter of NCF speaks about the need for cultivating rationalist attitude among children and encouraging them to think and act independently. The (controversial) chapter is very much in line with this stated objective.  Rohit Dhankar, educationist.

The activists of Muslim Students Federation (MSF) then went a step ahead and burnt 14,000 textbooks that were being loaded into a truck at Malappuram. (It is not yet clear if the books consigned to flames were actually the controversial textbooks.) BJP, who entered the fray a bit late, clashed with the activists of Democratic Youth Federation of India (DYFI) and the youth wing of CPI(M), who had gathered in support of the book, and Thiruvananthapuram, the state capital, became a real battlefield.

However educationists across the country say that the textbook row is unjustified. Educationists and heads of Sarva Siksha Abhiyan (SSA) from various states, who had gathered in Thiruvananthapuram for a three-day national workshop, described the ongoing controversy over the contents of class VII social science textbook in the state as unjustified and disturbing, reported The Hindu on 25 June.

Rohit Dhankar, educationist from Rajasthan involved in the designing of the National Curriculum Framework (NCF) and one of the participants, described the chapter as absolutely in line with the NCF. The first chapter of NCF speaks about the need for cultivating rationalist attitude among children and encouraging them to think and act independently. The (controversial) chapter is very much in line with this stated objective, he added.

According to SCERT director M A Khader, the new curriculum is based on the one adopted by the National Council of Educational Research and Training in 2005. He has claimed that the teachers involved in the preparation of the textbook were selected through a written examination and that their political affiliations were not the criterion.

The other four chapters of this first part of the textbook deal with land ownership, land reforms, the Independence movement, conservation of water and the role of rivers in ancient civilisations and the present day. At least some would say that it requires the spirit and paranoia of a McCarthy to sight communist propaganda in these learning materials.

However, various religious denominations have called for not only scrapping the textbook altogether, but also revising the texts that were introduced this academic year for classes I, III and V. One particular aspect of the conglomeration that has come together against the curriculum change cannot go unobserved. Almost all the forces that had aligned against the first communist government in Kerala in 1959, in what was dubbed as the 'liberation struggle', can easily be identified to be the parties in cohort.

The state government has staunchly defended the textbook and has refused to withdraw it. However it has made a concession. An 18-member committee has been setup with eminent historian K N Panikkar as the chairman to study whether any portion of the textbook has objectionable contents. The committee has been given three months to make its evaluation. The committee has also been authorised to hold public hearings in order to examine any other issues it deems pertinent and also take into consideration specific complaints brought before it by interested parties.

But this doesn't seem to be the end of things and the ushering in of peace in the classrooms and on the streets of Kerala. The UDF has already rejected the committee alleging that the committee is packed with communist fellow travellers and that it will not be satisfied by anything less than the 'unconditional withdrawal of the objectionable textbook'.

To add more fuel, a segment of the church-managed schools has declared that their schools will not be teaching this chapter, but will have an alternate chapter. The Kalpakancherry panchayat in Malappuram district, governed by Indian Union Muslim League, a constituent of the UDF, has adopted a resolution that the controversial lesson need not be taught. Kalpakancherry is risking a direct confrontation with the states Ministry of Local Bodies and is throwing up fresh questions about the powers of the panchayats in intervening in academic matters. (Quest Features & Footage)

TIGER SANCTUARY : Are tigers back at the Buxa reserve?
MORE ARTICLES
on similar topics ...
CURRICULA