The System of Rice Intensification, known to increase rice yields significantly merely by following a few simple rules, is spreading throughout Bihar, thanks to an award-winning film that educates farmers. Shoma Chatterji reports.
29 June 2011 -

Meghnath Bhattacharya and Bijoo Toppo have won two awards at the 58th National Film Awards announced earlier this year. One of them is for Loha Garam Hai, previously reviewed on these pages, on the ill effects of industrialization on environment, health and livelihood. The other one is for Ek Ropa Dhaan, declared the Best Film on Agriculture.

The 26-minute film traverses the fields of Bihar to explain, educate and promote a new technology in paddy cultivation that the locals have given the name Ek Ropa Dhaan from which the film borrows its title. The film takes a look at the basic problem of food . the first of our survival needs - and points to a way of solving the problem, known as the System of Rice Intensification (SRI), to boost agricultural yields. The advantages of this relatively simple technique is that it needs less fertilizers, seeds, insecticides, labour and most importantly, much less water than is needed in normal modes of cultivation. The water needed is only about one-third of what is used in the traditional system of growing paddy. (See here and here for more about SRI.)

The opening frame of the film shows a green farming field, with a voice-over explaining the acute scarcity of food, mainly among the farming population. One of the farmers interviewed in the film says that most farmers produce less than subsistence levels and can barely live for three months out of what they normally produce. The Ek Ropa Dhaan technique has bettered their lives in a significant way. This farming method was introduced by a Catholic priest, Father Henri de Laulanie, in Madagascar, around 25 years ago.

The exorbitant prices of fertilizers, seeds, irrigation, electricity and labour have adversely affected any possible profits from farming. However, an increase in productivity does not always require higher investment. Farm yields can be enhanced by improving the methods of cultivation - and this is precisely what the film points out.

One striking feature is the proliferation of the woman's voice throughout the film. Kunti Devi, who has adopted this method for her farm, smiles into the camera and proudly claims how numerous farmers took her example to adopt the SRI method and got very good results. There are dozens of rural women who not only look after their own farms but also spread the message and help. 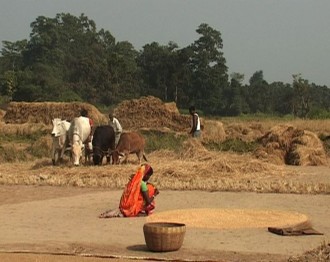 SRI stresses proper management of water with an appropriate irrigation system that allows water to be "put on" and "taken off" from the field at certain intervals. The system was developed in Madagascar in the 1980s and has been successfully tried in 25 countries across the world.

In India alone, farmers in more than 100 districts have begun using the SRI method. In Gaya district, Bihar, this method of cultivation has taken the form of a mass movement. The whole district is reverberating with different sections of the people discussing SRI and the success stories of many women, who have adopted this method. More than 35 countries have adopted this revolutionary method of paddy cultivation.

Some important features of the SRI method are:

These methods are explained in detail graphically as well as through voice-overs and interviews with an agricultural scientist, a district magistrate, an agricultural activist and other pioneers who are working to help small farmers make a living with dignity. Instead of first educating and persuading the big farmers to use this technology, this movement begins from the small and marginal farmer and moves upwards where big landowners and farmers take the example of practicing the method of cultivation.

The SRI technique of paddy cultivation can go a long way in providing an effective answer to the challenges of sustainable agriculture and addressing food security concerns.

Our ancestors worshipped food, and did not see it merely as a commodity to be sold in the market. Today, however, agriculture in India is passing through a crisis. Farming has become a loss-making proposition. Ek Ropa Dhaan shows one way of resolving this crisis. Scientists, agriculturists and others are convinced of the effectiveness of SRI method. This method of root intensification has also been successfully introduced in other crops such as wheat, sugar cane and vegetables.

The film is aesthetically expressive too without being too pedantic or filled with advisory oratory. The visuals capture the beautiful mosaic of Nature blue skies and green fields - and local women in colourful cotton saris, their hair sprinkled with vermillion dotting the picturesque canvas beautifully. The music track runs like a living constant throughout the film. The commentator often retreats to allow local voices to express themselves freely in their local dialect. Towards the end, the music of a popular Bengali folk song famously sung by the Indian People's Theatre Association long back fills the sound track meaningfully because it is a farmers' song.

The film drives home the point that an increase in productivity does not always require higher investment. Farm yields can be enhanced by improving the methods of cultivation. That changing the method of cultivation from broadcasting to transplanting will dramatically change the yield of paddy is common knowledge today.

The citation from the jury said "A succinct and well-researched film that looks closely at an innovation in the farming of rice." What do the directors have to say? "It is nice to get national recognition," beamed Biju Toppo, also a cinematographer. Meghnath adds, "It is more important to spread the message. Our films have been screened by universities in Germany and Denmark, but Ranchi University didn't bother. This could be a very good film for use in agricultural colleges and institutes of agricultural technology."