Sweet and sour nature of life

4 Tamarinds and Toffees is a delightful and nostalgic film on two women directed by a young and thoughtful director, writes Shoma Chatterji.
14 January 2018 -

Meet the very young and pretty Pranjali Dattatreya whose maiden short film 4 Tamarinds and Toffees (2017) has made it to the non-competitive section of the Mumbai International Film Festival for Documentary, Short and Animation Films (2018). 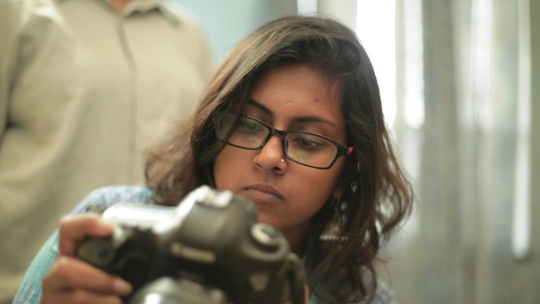 The Film Festival kicks off on January 28 and will last till February 3. Pranjali is not a Film and Television Institute of India graduate. She was specialising in Fine Arts and Commercial Art at Abhinav Kala Mahavidyalaya in Pune when the film bug bit her hard and proper and she switched to Maharashtra Institute of Technology Institute of Design.

”Filmmaking happened to me co-incidentally. Post my first year, I was assigned to make a short film, and made it very instinctively. It was a technically shabby short film, almost a one take film about the impact of domestic violence on kids, and I was fascinated to discover what magic could be communicated in literally one and a half minute or so,” says Pranjali, who is also a trained classical dancer. She then decided to switch to Film and Video Design instead of Graphic Design.

“My training in fine arts and commercial arts helped me in this new field too,” she says. She found cinema the most appealing and challenging among all forms of art she was training in earlier. And at one point of time, 4 Tamarinds and Toffees was born. The intriguing title of the film suggests many things.

One, it spells out the fondness little girls have towards tamarind and towards toffees. Two, tamarind is often not permitted by their mothers so the little girls usually eat them clandestinely and with their playmates share this secrecy with a joy that they remember long after they have ceased to be kids. Three, toffees are not taboo but since little girls in those days did not have money to spend, a sudden gift of toffees was a great point of joy. Four, tamarinds and toffees are also reflective of the innocence of childhood mainly among girls as boys do not share this joy. Their interests are different. Five, tamarinds and toffees are now dated things of enjoyment so this title has a ‘period’ feel to it, going back to a time that does not exist anymore now when little girls are busy playing around with their cell phones, iphones, tablets and laptops. Six, some childhood memories are unforgettable and remain etched in our minds even when we are quite old and a meeting with a close childhood friend takes us back to those childhood days.

According to Dattatreya, “4 Tamarinds and Toffees represents the sweet and sour nature of life.  The film also depicts a sense of a well-lived life. The heart of the story lies in the appreciation of an ordinary life and how extraordinary it can seem to the ones living it.”

4 Tamarinds and Toffees explores the journey of a profound friendship between two conservative Indian Maharashtrian women which started at a very young age. The two girls (now in their 70s) meet again and reminisce about their childhood. As they hardly step out of their houses, and they are set to meet each other after a considerable passage of time, they know it is probably their last meeting.

Manu, who is visiting Yamu, after many years, brings along with her tamarind for Yamu as a memoir of their childhood. In their last meeting they pass on the legacy of this friendship to their grandchildren who become friends as they meet. The grandchildren exchange toffees, just the way the grandmothers exchange tamarinds. 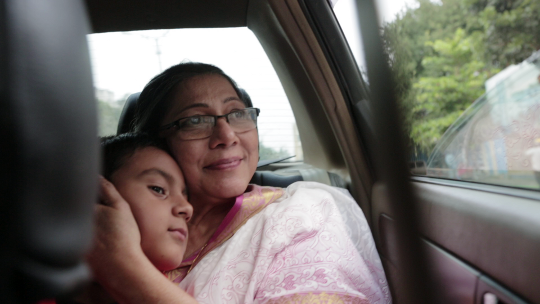 A still from 4 Tamarinds and Toffees. Pic: Pranjali Dattatreya

The film is set in the present with a few flashbacks, to the childhood of central characters - Manu and Yamu. Manu takes a journey from her house to Yamu’s house after many years and this journey acts as a nostalgic trip for her where the changed landscape of the city provides gateways to the memories of a well-lived life.

The film opens on a flight of stairs probably framing a a pond or a temple with two little girls, establishing the playfulness of childhood on the one hand and bonding on the other. “All, the shots depicting young Manu and young Yamu were shot at the Somnath Temple and its premises, at Pashan in Pune. It appealed to me because of its neutral colour palette and its old world charm maintained through its stone structures,” explains Dattatreya. The film is based on Purchundi, a short story by Mihir Potnis. When she heard the story from a friend, she was moved by its spirit of nostalgia on the one hand and its visual potential on the other. 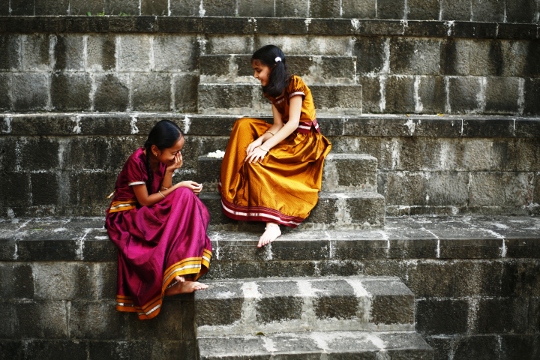 The childhood friends in a scene from the movie. Pic: Shoma Chatterji

“As with any art, an object treated well has the potential to move anyone who sees it. I was curious that if this story could move me, in spite of being rather straightforward and simple, just because it was narrated with passion, could it also move others if I made it into a film. The film was basically to satisfy that curiosity,” says the very articulate Dattatreya who knows precisely what she wants and how to express this.

There is a moving scene that shows the young, married daughter of Manu putting a flower gajra in her mother’s hair. One can perhaps read a feminist statement in this scene because the mother is a widow and in most Hindu families, widows are not supposed to wear flowers as an ornament. It is a bold but very understated gesture made by a young woman that expresses her personal views about needless social taboos that have outlived their significance if ever there was one.

What does the director have to say about this scene? Dattatreya says, “It is interesting that you have noticed it. When we were shooting this scene, it became a point of heated discussion between me and the senior actor who was playing the old Manu. She was convinced that as a conservative character, she should not be wearing flowers in her hair. But my point of view is that it is important to signify that the character is dressed up to celebrate the reunion with her childhood playmate. For me, her wearing the flower string in her hair was a throwback to the young girl Manu who continues to live within the older Manu. We settled that we would keep the first two lines between the mother and daughter intact that would subtly refer to the concern the actor brought into the scene. She could have rejected the gajra but her daughter pushes her gently and she wears it.”

Was she trying to make a statement through this film? Dattatreya says, “If the film can be read as a statement, it is a coincidence. Yes, a lot of conscious thought went into making the film, like why a violin and Mohan veena in the music, or why a bell sound is where it is, or why a certain colour in the visuals…..also, a few things were instinctive but nowhere was I consciously trying to make a statement. My goal was to tell a story that moved me, but I am aware that film as a cultural product cannot be read in vacuum, and therefore could be interpreted in many ways, The author, after all, is no more so this was one way of spreading the message he wished to send across.”

The story seemingly exists at the nexus of nostalgia and friendship. It is not a comedy and is not a classical drama nor is there any real conflict. It is linear, short, precise and simple. It takes stock of the lives of two friends who have gone their own separate ways after marriage and how, despite living apart for most of their lives, they have been sort of witnesses to each other’s lives and still cherish the memories of childhood lived together.

In a world spilling over with films that are constantly trying to push the envelope about violence against women, patriarchy, feminist angst and so on, 4 Tamarinds and Toffees brings a whiz of fresh air and sweet nostalgia.