What binds every family in this Kerala Panchayat

The thrust on chemical-free cultivation of vegetables that started as an experiment in the 90s has now evolved into a culture in Kerala’s Kanjikkuzhi Gram Panchayat. P N Venugopal traces the growth and success of this initiative so far.
19 January 2015 -

It was a festive atmosphere early in the morning at the vegetable store of the Panchayat Development Society (PDS) of Kanjikkuzhi Gram Panchayat on NH 47 when we dropped in.

The PDS, an apex body of the 234 odd men’s self help groups (SHG) in Kanjikkuzhi Panchayat, is the brain child of Thomas Isaac, a minister in the former LDF lead coalition government and one who has been the guiding spirit of Kanjikkuzhi through the last two decades and more. It was formed in 2002 as the facilitator for the SHGs, coordinating their activities and working as a trading platform for their products including coir mats, vegetables, pickles, rice powder, milk etc.

On this particular morning, long beans, snake gourd and bitter gourd were heaped on the mats spread over the floor of the PDS store. A young man had just brought in a huge bunch of red spinach on his two- wheeler. Pumpkins, ash gourd, tomato, plantains and banana: it was a delightful and refreshing sight.

The panchayat president, vice president, ward councillors and a host of activists had also gathered to take the latest harvest to Kochi, the nearest big city, 30 km away, for a grand sale.

Spread over an area of only 16.62 sq km, Kanjikkuzhi is a small gram panchayat in Alappuzha district, Kerala. Most of the land here is arid, consisting of infertile white sand with very little vegetative content.

While the Panchayat extends over an area of 17059 hectares, 32 percent of land owners hold only about 10 cents (one acre = 100 cents) each. Those who hold more than one acre account for only 8.8 percent. In short, farm land is highly fragmented in Kanjikkuzhi. 80 percent of the people were engaged in the traditional coir industry and agriculture was the principal livelihood of only 3.5 percent of the population.

With more and more people among the younger generation turning away from farming, Kanjikkuzhi had been emerging as a microcosm of Kerala’s increasingly consumerist society. It was thus especially remarkable when as many as 25 lakh vegetable saplings were planted in this area just about three months ago in what could be seen as a climax to an initiative that began in 1996.

The growth of a revolution

From being merely a Panchayat-driven programme sponsored by the government, vegetable farming grew akin to a people’s campaign in the region by the middle of 1996 under the dedicated leadership of the late P P Swathanthryam, then panchayat president. Committees were formed, which included all segments of the population in them.

As many as 6000 families sowed vegetable seeds on their own plot of land on 26 June 1996, an event that inspired even the next generations.

The emphasis was on organically grown vegetables, avoiding chemical fertilizers and pesticides. New marketing avenues such as the district civil station compound were identified and within a few seasons, things reached a stage where it was a matter of shame for a family not to be engaged in vegetable cultivation.

Over the years, the Panchayat also became self-sufficient in the manufacturing of organic manure. Organic farming in its wake brought in enquiries and recognition from various parts of the country and even outside.

Almost 50 percent of the vegetables produced is marketed through PDS. A floor price has also been fixed for as many as 14 vegetables in order to protect the farmers from price fluctuation because of a glut in the market.

“What we are trying to achieve is establishing the ‘Kanjikkuzhi brand’ of vegetables,” says M Santoshkumar, the president of PDS. “We are confident of reaching that goal because people have already reposed their faith in the authenticity of our products.”

The Kanjikkuzhi initiative becomes particularly relevant in the context of Kerala’s dependence on other states for its daily food needs. Apart from rice, wheat and meat, more than 60 percent of its total vegetable requirement was also ‘imported’ from the neighbouring states. Official and unofficial lab tests have shown that almost all such vegetables are severely contaminated by harmful pesticides. 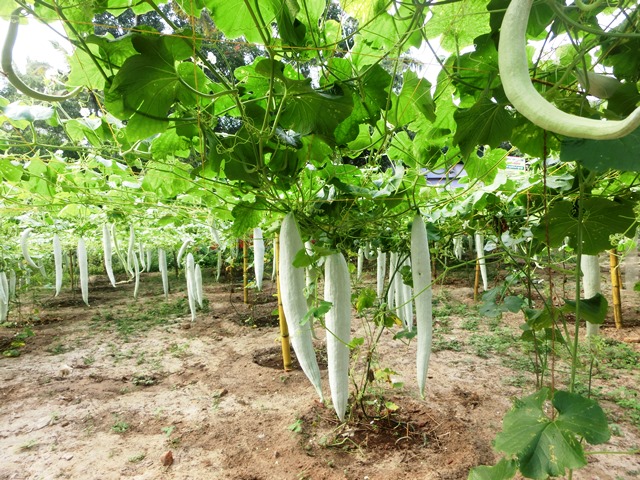 Also, the Endosulfan effect, blamed for the terrible plight and miserable deaths of hundreds as well as large scale deformities at birth in Kerala’s Kasargode district, has never really faded from the collective subconscious of Keralites. It has led to heightened awareness levels and the demand for organic vegetables has risen like never before.

The latest innovation from Kanjikkuzhi is the ‘Janakeeya Jaiva Haritha Samardhi’ which can be roughly translated as ‘People’s Biogreen Prosperity.’ The idea is to turn every vacant piece of land in the Panchayat into a green patch and take up intensive cultivation of vegetables, the organic way.

Nurseries have been set up in the 18 wards of the Panchayat and seeds sown in October 2014. They were nursed and managed by women from the Kudumbasree units. By the end of the month, 25 lakh vegetable saplings of 11 varieties were ready. These were distributed to the 8600 families in the Panchayat.

“Our aim is to produce 4000 tons of vegetables with an intrinsic value of Rupees 14 crore during the season,” says the Panchayat chairperson Geetha Karthikeyan. Presently, the average value per annum would work out to something between three to four crore rupees, though an accurate evaluation has not been done as yet. At present, only a part of the total production reaches the market after personal use.

There is almost 100 percent participation in the programme, and at least 30 percent engage in such farming with commercial interests, says Geetha. The Panchayat has an outlay of Rupees 50 lakh for this programme from plan funds, last year’s award from the state government for cultivation of fallow land, supply of organic manure etc.

A more recent novelty is the sponsorship programme. The Panchayat managed to get a fallow plot of 4.5 acres, free of rental and intensive cultivation was undertaken on the stretch. However, this meant that funds would have to be arranged for agricultural inputs and labour. A sponsorship programme was then conceived of, under which one could pay Rs 1000 and become the ‘owner’ of one cent of the land.

At the time of harvesting, that is roughly within four months, the sponsor will be given vegetables worth Rs 1000. Initially the workers will be paid wages at the NREGS rate only. Upon harvesting, 60 percent of the profit will go to the workers, 20 percent to the investor-owner and the balance 20 will be kept as a reserve for the next crop.

Sponsorship has been easy to pull in. While Mammootty, the leading star of the Malayalam film world, sponsored 25 cents, various employees’ and officers’ associations as well as individuals came up for grabbing the sponsorships. There were sponsorships even from expatriates in Kuwait and other Gulf countries.

It is indeed heartening that the Kanjikkuzhi initiative has held on for the last two decades against great odds. Maybe there is  also a lesson in it,  that even in a highly polarised society like that of Kerala, themes and issues  that  affect the common masses will endure and survive political schisms, provided they are taken up with sincerity and a sense of direction.