Looking beyond the spread on our tables

Overcoming our ignorance of the richness of traditional food options, and imbibing the culinary cultures of those who live in harmony with nature could signify a giant step towards food and nutritional security, says Devinder Sharma after his visit to a tribal food fest.
13 March 2014 -

"Over the past 50 years, we are seeing that diets around the world are changing and they are becoming more similar -- what we call the 'globalised diet,'" Colin Khoury, a scientist from the Colombia-based Centre for Tropical Agriculture told the BBC. "This diet is composed of big, major crops like wheat, rice, potato and sugar. It also includes crops that were not important 50 years ago but have become very important now, particularly oil crops like soybean."While wheat has long been a staple crop, it is now a key food in more than 97 per cent of countries listed in UN data. And from relative obscurity, soybean has become 'significant' in the diets in almost three-quarter of the world’s nations. The study is published in the Proceedings of the National Academy of Sciences of USA.The decline in crop diversity due to the emergence of a globalised diet has limited the ability to supplement the energy-dense part of the diet with nutrient rich foods. Amid the crops recording a decline in recent decades are millets, rye, yams, sweet potatoes and cassava, reports the BBC .

This report is among several others which have highlighted the threat to food security as well as nutritional security from a 'globalised diet'. We are all responsible directly or indirectly for this decline. If I were to ask you to count the foods that you eat, I bet you would not be able to name more than a few. Wheat, rice, tomato, cucumber, apple, banana … and you begin to reel out the names you know. Not many can name even twenty. Try a little harder, and you will end up probably with another ten. If you are a little more aware, you might struggle with a few more names. That’s it.

That’s how narrow and limited our food sense has come down to being. The more we are urbanised, less are the chances of our knowing about our traditional foods, and the rich food culture that once prevailed in this country.

The disconnect with the huge diversity of food has built up over the ages and has actually alienated modern civilization from the virtues of the vast repository of biological wealth that once existed. Modern living has snapped the symbiotic relationship that existed with nature. Not many know that India is a mega-diversity region with over 51,000 plant species in existence, with hardly a handful of these being cultivated.

Learning from the ‘uneducated’

When Laxmi Pidikaka, a tribal woman from southern Odisha explained to me the importance and relevance of each of the 1,582 food species that were displayed at the recently concluded Adivasi Food Festival held at Munda village in Rayagada district, I was not only amazed by the richness of food around us, but also came back with a consciousness of how uneducated I was when it came to mankind’s basic requirement of food.

Of the 1,582 food species on display (and that included different kinds of fish, crabs and birds that are part of the daily diet of some tribals), as many as 972 were uncultivated. Yes, you heard it right. Uncultivated foods. 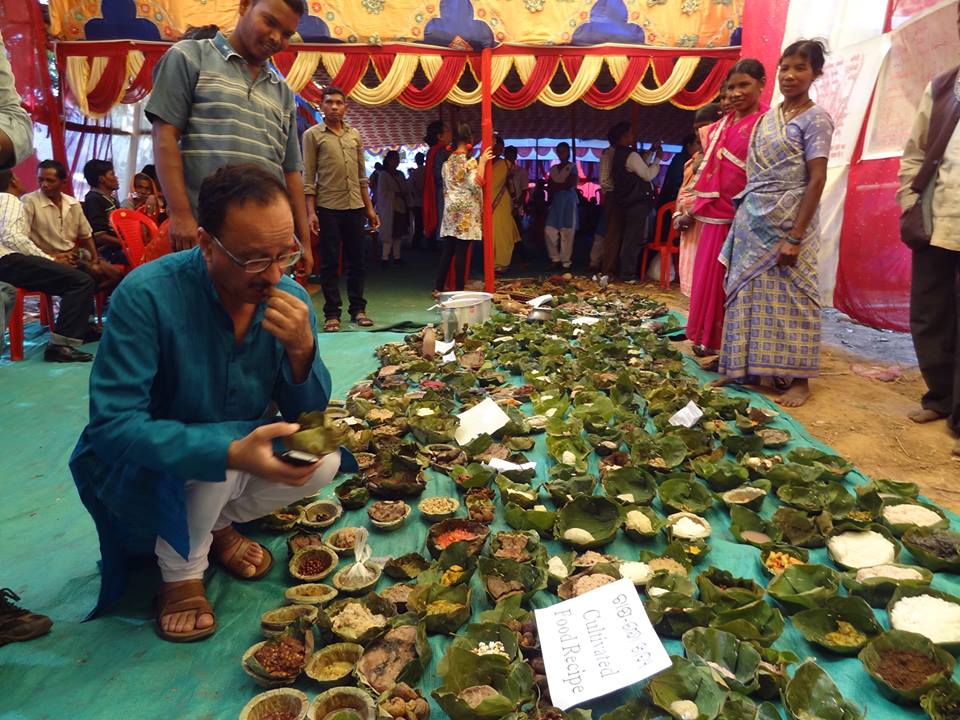 A variety of traditional, tribal food dishes were on display at the Adivasi Food Festival in Munda. Pic: Devinder Sharma

A dozen tribes living in Odisha, Madhya Pradesh, Chhattisgarh, Jharkhand and Maharashtra had gathered at the Adivasi Food Festival to celebrate their foods, as an appreciation of the traditional food cultures linked to their age-old farming practices that provide them nutritional security while protecting and conserving nature’s bounty.

Members from the Kondh, Koya, Didai, Santhal, Juanga, Baiga, Bhil, Pahari Korva, Paudi Bhuiyan and Birhor tribes, representing more than 300 villages spread across the tribal heartland, came to showcase their foods, and also spent the next day discussing how to protect the traditional farming system from the onslaught of the National Food Security Act that aimed at providing them with 5 kg of wheat, rice or millets.

But why was she so angry with what most policy makers and planners see as development? Don’t most educated elite think that tribals are uneducated and uncivilized, and therefore all our efforts must be directed towards bringing them into the fold of what we consider ‘mainstream’?

“Don’t teach us what development is. We conserved and preserved our plants, our soil, our forests, and our rivers over the centuries. Now you want to take these away, and destroy them. And then you call it development.” Saying this, Minati hid her face.

When I coaxed her to explain to me how the adivasis were living in tandem with nature, and how the modern system was distancing them from their traditional cultures and community control over resources, she agreed to first show me some plants that had multiple uses, demonstrating the traditional skills of the community which preserved and used them without pushing them into the oblivion of extinction.

Minati showed me the Siali beans - quite a large, dry bean whose seeds are eaten after boiling or roasting. The branches of the plant are used to make ropes, and the leaves are used to make leaf plates. Kusum Koli leaves are used for fodder, while its fruits are eaten raw; the wood is used as firewood, and oil is extracted from the seeds. This oil serves as a mosquito repellent and also treats certain skin diseases.

Even the better known Mahua trees have multiple uses. Leaves are used for fodder, flowers are used to make jaggery, liquor and porridge. Flowers are also consumed and often sold in the market, a kind of a curry is made from the fruits besides being used as fodder, and the seed provides cooking oil after extraction. All these are unfortunately classified as uncultivated plants in agricultural parlance, and therefore do not receive any attention.

Debjeet Sarangi of Living Farms, which organized the Adivasi Food festival, says it is aimed at deepening the communitarian ethos of the adivasi society and the shared knowledge systems. The event will highlight their sustainable way of growing food and its relationship with their ecology – land, plants, animals and forests.

When I asked Sarangi whether this exercise didn’t aim at romanticizing the foregone, his response was curt: “That’s where we fault. These people are in complete harmony with nature. Instead of brushing them aside as uncivilized, we have to learn from them. Whether we like it or not, the future of humanity is hidden in these tribal cultures.”

I decided to take a walk to see the range of cooked foods displayed. At the entrance to the event itself participants were served a nutritious welcome drink. Made from ragi millet with a sprinkling of rice grains, the drink was certainly very tasty. Called Mandia jau in the local language, it is actually a ragi gruel. Says Salome Yesudas, “I don’t know why people need to drink colas and other kinds of soda when you have such healthy drinks available.” Given that the sale of colas is already on a decline, it will be certainly helpful if someone was to promote Mandia jau.

I was initially a little apprehensive of tasting the cooked food displayed. More so, because I am a diabetic. But when Yesudas, a nutritionist from Chennai, explained to me how most of these dishes were based on different kinds of millets, which are the preferred food for people suffering from lifestyle diseases, I couldn’t restrain myself from dipping my fingers.

Living Farms is now documenting the food recipes and has prepared a nutrition chart detailing the nutrient composition of uncultivated plants. They have also printed posters in English and Oriya on the vast varieties of foods available for a balanced diet, as well as for summer and winter seasons.

The Adivasi Food Festival at Munda was not the first traditional festival of food that I visited, but what gives me hope and encouragement is the fact that some civil society groups are making organised efforts to bring back the lost traditions, including culinary habits. It also clearly demonstrates that what India needs is not a centralized food security system but a multi-layered decentralized food security system based on the traditional practices of a particular region. Instead of providing the tribal population with a monthly entitlement of 5 kg of wheat/rice/millets, the focus should be on strengthening the existing food system.

However, this will be only possible when we are able to inculcate a feeling of pride in our traditional systems. The richness of our food culture, which is so intricately linked to the preservation of natural resources, is where it can all begin. I don’t know why our agricultural universities don’t talk about it; I don’t know why our food magazines and TV shows never focus on traditional foods; but I am certainly not surprised that our Planning Commission has no idea about what tribal cultures imbibe.

1. Proceedings of the National Academy of Sciences of USA

Devinder Sharma is a food and trade policy analyst and chairs the New Delhi-based Forum for Biotechnology & Food Security. His blog, Ground Reality can be read at http://devinder-sharma.blogspot.com/