Nomadic communities make up about 7 percent of India's population, but policy makers have largely ignored them, says Bahar Dutt.
01 July 2003 -

This is about nomads. Communities on the move which have set up home whenever and wherever they stopped. I was first struck by their existence when I saw a few of them squatting amid the stone and concrete of Delhi's posh suburban colonies. Later, sporting red turbans and as they guided a large herd of cattle near the row of McDonalds and Barista outlets close to the multiplex buildings of Haryana, I was again struck by the incongruity of the situation.

Nomads, or traditional communities on the move, are today a worried lot. As the urban sprawl of cities increases and village commons shrink, they find themselves being displaced constantly. This is their story. Of a way of life that is being threatened. A way of life that needs to be preserved not for the sake of recording bits of history in a museum, but for more complex reasons. This is a personal account of my time spent with some nomadic communities in Rajasthan. In a way, I hope that this is their account too. 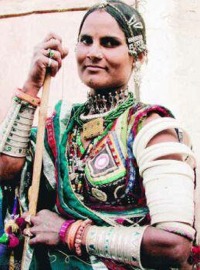  Mana, a middle-aged woman, sits at the local market in Thanagazi district of Rajasthan, repairing agricultural tools. She is from the Gaduliya lohar community and makes hammers, spoons, chisels and tongs from scrap metal. The goods that she makes do not sell for more than Re 1.

 Shishanath, a snake charmer, sets out with a basket full of snakes. He makes a living by entertaining street audiences.

 Nandu, an acrobat, spends the entire day performing feats for overawed audiences in the streets of Alwar city. He belongs to the Nat community.

 Gurjari, a young woman from the Banjara community, buys multani mitti and salt from the market, then pounds the mass into smaller pieces and sells it to farmers' wives in the villages nearby in exchange for a kilo of grain.

MANA, Shishanath, Nandu and Gurjari may belong to different communities, but they all have one thing in common. They are the nomads of Rajasthan, earning a livelihood by providing essential services to host or settled populations. Villages across the country are often frequented by nomadic communities. The lohars or the blacksmiths arrive at the beginning of the agricultural season to repair and sell agricultural tools and implements while pastoral groups, like the Rabaris, are allowed to build temporary shelters on agricultural lands where the dung from their livestock helps fertilise the fields.

I was interested in finding out more about these people and their traditional way of life. As I travelled with the nomads and researched about them I found that nomadism was more than just being on the move. The mobility of these groups was an essential economic strategy, central to the very nature of their profession.

According to sociologists, South Asia has the world's largest nomadic population. In India, roughly seven per cent of the population is nomadic. They thus constitute a substantial portion of our population. Yet, despite their large numbers, most nomadic communities do not even have voting rights. Perhaps this explains why they have been largely ignored by policy makers and the government. So what is nomadism all about? Is it just about being on the move? Sociologists articulate that before the advent of transportation and communication, mobile groups served as useful adjuncts to sedentary societies. As occupational groups of hunters, trappers, blacksmiths, basket weavers and entertainers like puppeteers, acrobats, fortune-tellers, singers and dancers, the nomads shared a symbiotic relationship with settled people. In return for their services, they were allowed to squat on the village commons and use resources such as water or pasture lands for grazing their cattle till they moved on to their next dera (settlement).

Unless policies are able to address the issues of livelihood, offering the nomads health, education or homes is pointless.

The nomadic way of life did not evolve in a vacuum. Most communities today have deep historical roots. For instance the origins of Killekyatha or the leather-picture exhibitors can be traced back to as early as 1520. The Rabaris or the pastoral nomads of Rajasthan are referred to by Abul Faizl in the Ain-e-Akbari as being paid in grain and cash for their services as mounted couriers throughout the Mughal period. (Frater, 1995). Some of the agro-pastoral communities like the Abhiras find mention in the Mahabharata as robbers and highway men. Many of the nomadic communities that I interacted with refer to some myth or local folklore that is associated with their origins. The itinerant Gaduliya lohars or blacksmiths spoke of how "kalka devi" cursed them to a nomadic way of life. They also refer to Chittorgarh in Rajasthan as their ancestral home which they left after it fell to the Mughal Army in 1568.

It was the colonial period which brought about significant changes for the nomads. With crime being defined and constructed to suit colonial policy, many groups were labelled as criminals. Furthermore, new forest regulations after the 1860s deprived numerous pastoralists of grazing land, and most foragers lost free access to forests. The construction of canals, roads and the laying of railway lines led to a complete disruption of migration patterns of many nomadic groups during the late 19th Century.

Do the nomads still exist? Have they given up the proverbial lifestyle of a "home on their backs" and settled down?

What struck me the most was the sheer diversity of the livelihoods of each of these nomadic communities. Each one occupied a particular socio-economic niche, fulfilling a specific need of village or sedentary communities. There were the Ghatiya Jogis or the makers of grinding stones for household use, the Nandiwallahs who were welcomed by farmers for the manure their cattle provided to the fields, the Hakkipikkis of southern India who made a living from hunting or selling wild animals or the Vaidus or traditional healers who made medicines from forest plants. Sociological studies show that three to 20 such communities of foragers, healers, entertainers or specialised service providers like the lohars or the blacksmiths visited villages. I realised that somehow, each of these livelihoods was threatened due to a multiplicity of factors  be it factory made goods, modern means of entertainment or strict wildlife laws.

For instance, when there were no roads, or trucks or big markets, it was the Banjaras who were the mobile meat transporters. They would herd cattle in large numbers from Rajasthan to Uttar Pradesh, to slaughterhouses. Now cattle are stuffed like sardines into trucks. The women in the Banjara community had suffered no less. Earlier, banjara women like Santara would buy goods in bulk and then do door-to-door selling in villages. Santara's job, though decades old, was much like that of the modern day saleswoman. However, as it was no longer viable, Santara has taken to working as a daily wage labour at a construction site. As I stayed in her hut for the night, I asked Santara if she missed her earlier job. She did miss the freedom as she was now at the beck and call of the contractor.

Then there was Gopal from the Bhopa community. As we sat under the shade of a banyan tree, he unfurled a canvas piece which was 20 feet long and had the most intricate paintings of deities. The Bhopas earn a living by reciting tales from the canvas piece. Some of the tales of the Bhopas carry on through the night. But according to the Bhopas, no one is interested in listening to their stories anymore. They would rather listen to the radio or watch television, he remarks cynically.

My next stop is at a village of the Gaduliya lohars, who have got their name from the gaddi or carts they use to move from place to place. Today people prefer to buy steel and aluminium goods from the market rather than use the rickety tools that are crafted by the blacksmiths or the lohars. The lohars therefore find themselves constantly on the move searching for new markets. "One town or district is usually not enough to sustain our living so we move on to the next place. In the old days we had good relations with the villagers and farmers would invite us to their homes," says Gurjari from the lohar community.

I interviewed different nomads from different professions or economic groups and two common elements, perhaps inter-linked, emerged. First, that each group had been affected by modernisation and was into increasing conflict with sedentary villagers, with whom they no longer seemed to share a symbiotic relation. Second, as a result of the changing times, the value of their occupation had gone down. Increasingly, nomadic people were turning to the labour markets or construction sites for jobs.

Do nomads still need to be on the move?

As I probed into this form of a lifestyle, I realised that there are complex reasons why people follow such a tradition. By being on the move nomads are able to tap into wider markets for the services they provide. It seemed to represent a shrewd economic strategy  one of optimising benefits and minimising risks by being constantly on the move. Yet I observed that the reaction of most policy makers and development agencies has been to view nomadic groups as being "under-developed", and in need of integration with the rest of society. And if you examine these policies, most have failed.

In the 1960s, the Rajasthan government tried unsuccessfully to provide housing to the lohar communities. Most abandoned them. It seems quite illogical and pointless to offer the nomads health, education or homes without addressing the question of livelihood. Unless policies are able to address the issues of livelihood, all such schemes will be unsuccessful. The basis of the nomadic lifestyle revolves around being on the move.

As I came to the end of my research I wondered what would happen to traditional livelihoods. Would the modern market be able to absorb these people and their skills? And what would happen to the culture when a livelihood died out? Would Shishanath the sapera and Nandu the Nat acrobat end up as construction workers or tilling land? If one looks at unemployment figures in the country it seems clear that modern labour markets can barely provide gainful employment to settled or even educated people.

Perhaps there is a need to safeguard traditional occupations and ways of life  not for the sake of romanticising them, but by recognising this way of life as an enterprising, security oriented strategy, and respecting it.

Bahar Dutt is currently with the Wildlife Trust of India on a project for livelihood options for snake charmers. The article is based on a grant from the University of Cologne, Germany. It was originally published in The Hindu.