What constrains our social enterprises?

Enterprises that seek to address socio-economic problems through focused business models could make significant impact with a little more support. Seema S Hegde discusses an example from Bangalore, and explains how the state and big business often fail to recognise that.
30 January 2014 -

By and large, the measuring rod of success of a business enterprise has not been its contribution to society, but profit maximisation and expansion in the shortest time span. However, over time, there is a growing realisation that the pursuit of financial returns, completely sidelining social concerns, has ultimately widened the gap between the rich and the poor in many parts of the world.

While business enterprises do contribute to poverty reduction to an extent through job creation, this alone cannot address the socioeconomic problems of communities. At the same time, the challenges of global warming and climate change, which once again disproportionately affect the poor, have to be factored in. Governments, civil society and commercial entities working in silos are unlikely to yield any solution to the most pressing problems of the day. It is perhaps in realisation of this that a different breed of entrepreneurs with what is termed 'social enterprises' has emerged.

Social entrepreneurs too have financial goals, but are ready to settle for lesser profit margins as long as they achieve their primary aim of addressing social and environmental issues. This is particularly relevant in the developing world. For example, most cities in India are grappling with increasing problems of low health and sanitation, poor living conditions, unplanned growth of slums, water scarcity, school drop-outs and malnutrition. This has also given rise to a huge potential for enterprises with a social bent to participate in addressing these problems for the benefit of the masses through focused business models.

Such enterprises have broken ground in several instances within the social, institutional and environmental spheres in India, but when it comes to scaling up of operations, they falter more often than not. There are several factors at play behind this, most critical perhaps being less interest among investors to invest in social enterprises because of the low profit margins they fetch. There is also a shortage of trained or capable personnel who are ready to work for the cause. Most qualified persons would prefer to work for a commercial enterprise for a better remuneration than for a social enterprise.

Take the case of Bangalore-based Three Wheels United, for example. In 2006, a Dutch traveller on his visit to Bangalore was alarmed by the air and noise pollution created by the three-wheeler auto rickshaws, and his thrust on combating pollution resulted in the establishment of Three Wheels United (TWU) in the same year. TWU is trying to improve the socioeconomic conditions of the auto rickshaw drivers in the city and helping them shift to three-stroke, cleaner vehicles, thereby also addressing the issues of air and noise pollution in Bangalore.

A few extremely qualified persons joined hands and started working for it giving up attractive corporate jobs. Even though it was started with an environmental concern, very soon its personnel deciphered the complicated relationship between social and environmental problems. In other words, they observed that along with environmental pollution, the socioeconomic conditions of the autorickshaw drivers also needed to be looked at, and hence emerged their three-way business model.

Under a financial approach, TWU identifies the beneficiary, assists him in getting loans from nationalised banks to purchase the vehicle and also looks after the status of his loan repayment. Through business-building approach, it selects beneficiaries, groups them in five where each one is responsible for the loan repayment of the others. In a technological approach, it is trying to introduce non-polluting electric autorickshaws. Also, customers can pay for the ride through Airtel money, credit/ debit cards.

All the beneficiaries under the scheme of TWU are given a branding of 'Namma Auto' meaning 'Our Auto' - a mark that distinguishes them from the other auto rickshaws on the roads. It provides training for drivers in areas of etiquette, dress sense, conduct, and compliance with traffic rules. Above all, in order to improve the living conditions of these drivers, it is open to networking with other companies or organisations that come forward to provide microfinance and housing loans to these drivers. 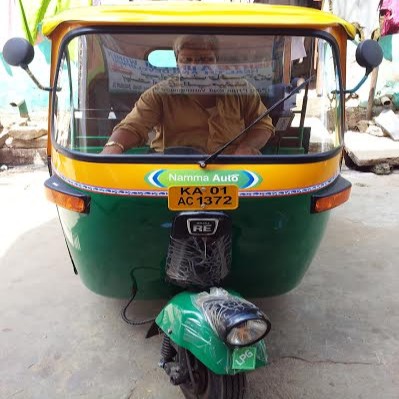 If TWU had been able to attract greater capital and had favourable government policies, it could have impacted the lives of a greater number of auto rickshaw drivers and contributed to a much cleaner Bangalore, with a more sound system of public transport.

While the issue addressed by it is a very real and pressing one in the city, like many other small scale social enterprises, TWU's ride on the path of entrepreneurship has been bumpy when it comes to scaling up. To date, it has been successful in bringing only 400 namma autos on the road, which forms a meagre 0.32 per cent of the total auto rickshaws plying on the roads of Bangalore city. TWU aims to convert at least 20 per cent of the existing autorickshaws into namma autos in the next four years.

Working aggressively towards its mission, TWU has sorted out its endogenous problems, such as tracking the daily collection of loan repayment instalments from the drivers by installing software to keep track of it in real time. But the exogenous problems continue to pose hurdles in its expansion path. The major challenges before the firm have been to get qualified personnel to work, to attract relevant partners to invest, and to figure out willing and genuine NGO partners who are ready to work for the welfare of the autorickshaw drivers. Indeed, there are very few such organisations.

Above all, the most difficult problem has been dealing with unfriendly government policies such as the educational prerequisite for licences. The state rules mandate that a driver should have passed the 8th standard at least in order to obtain a driving licence. In reality, there are many auto-rickshaw drivers who have been driving without a licence for many years for lack of formal education.

More than 2000 such drivers are already present in the TWU network, who are ready to come under the legal purview if a licence is provided. But they are denied this opportunity because of their lack of educational qualification. TWU has made repeated requests to the government but without success.

Even if an auto rickshaw driver qualifies to get a licence, he will be given a badge number only after a year; until then he cannot drive a commercial vehicle, but can drive only a private vehicle. Since there are no private auto rickshaws, and with not enough economic footing or support to wait out one year, drivers prefer to ply rented auto rickshaws without a licence and badge number.

TWU has participated actively in many government forums and discussions and put forward its suggestions and requests for improving the policies towards the auto rickshaws in order to bring cleaner vehicles on the road, but there has not been any positive response.

CEO of TWU, Ramesh Prabhu laments, "However aggressively we work in order to reach as many people as we can, if there is no cooperation from the Government, it is very difficult to succeed in our mission. In fact, some of the policies need only trivial changes. A positive attitude on the part of the government would be of great help to us and to society."

The fact that a business enterprise concentrating on social, institutional and environmental factors more often than not faces structural obstacles also has an adverse impact on society as a whole. If TWU had been able to attract greater capital, collaborate with appropriate partners, and had favourable government policies, it could have impacted the lives of a greater number of auto rickshaw drivers and contributed to a much cleaner Bangalore, with a more sound system of public transport.

There may be many social enterprises which are working in different spheres all over India but creating very little impact locally. TWU is one such example. If such enterprises are recognised and assisted, it would help to address social problems greatly. A number of suggestions would be timely in this regard.

The government should have a continuous check on whether the multinational and the domestic giants are adhering to the rules laid down by The Companies Act 2013 with respect to CSR (Corporate Social Responsibility) activities. Every company having a net worth of Rs 500 crore or more, or a turnover of Rs 1,000 crore or more, or a net profit of Rs 5 crore or more during any financial year shall constitute a CSR committee and undertake activities either in socioeconomic or in environmental sphere. These companies must annually spend at least two per cent of their average net profit over the preceding three years on CSR works.

A network or a forum of all social enterprises developed to facilitate discussion and exchange of ideas about their business models would also be helpful.

Social enterprises that are already operating with a strong bent towards social and environmental outcomes should be recognised and financially assisted. Depending on the nature of work undertaken by the small scale social enterprises, the government should heed their requests and proposals on priority and respond constructively. When it can act quickly on the appeal of multinational companies who bring in foreign capital, why not social enterprises who are working at the grassroots and for the improvement of society as a whole?

If social entrepreneurs are neglected, private enterprises would place extortionate demands on scarce local resources and the gap between the rich and the poor would widen further in the process. Environmental conditions would continue to decline. On the contrary, if such enterprises are assisted, they become self sustainable and can help other small enterprises around them scale up. That would only benefit the society and the environment.

Seema S Hegde is an independent researcher working in the area of environmental economics.