The quality of the air in our cities is reducing the productivity of companies, and diminishing consumer demand. This hits some sectors of the economy particularly hard. Business leaders must advocate and support efforts to tackle this head-on.

India is in the midst of a pollution pandemic. According to the World Air Quality Report of 2019, India ranked fifth out of 98 countries on weighted average PM2.5 concentration levels, behind Bangladesh, Pakistan, Mongolia, and Afghanistan. Twenty-one of the world's 30 cities with the worst air pollution are in India. New Delhi has the poorest air quality among cities globally, with PM2.5 concentration levels nearly ten times the WHO target. PM2.5 levels have remained alarmingly high over the last five years.

Conventional wisdom considers air-pollution an unavoidable by-product of economic growth, thus limiting the intensity of the response to it. In existing literature and publications, GDP per capita and growth rate are often linked to emissions levels, one predicting the other. This has framed an understanding, with many businesses, that growth and good air quality are always in conflict, which has led to an entrenched perception of environmental regulations as a cost that holds back companies.

In reality, air pollution costs Indian businesses Rs.7 lakh crores (USD 95 billion) every year, approximately 40 per cent of the cost of tackling the COVID-19 pandemic. This is equivalent to three per cent of India's GDP. While this cost may have gone unnoticed thus far, it is high and persistent. The cost of air pollution manifests in six ways – lower labour productivity, lower consumer footfall, premature mortality, lower asset productivity, increased health expenses and welfare losses. Out of these, employee productivity, consumer footfall and premature mortality impact businesses directly.

In 2019, air pollution resulted in 1.3 billion working days lost, costing USD 6 bn. in India due to absenteeism. As air pollution rises, employees fall sick themselves or stay at home to take care of dependents such as children and the elderly, who are more vulnerable to air pollution. Ninety-eight per cent of this cost is borne by India's northern and eastern part, where AQI levels cross 300+ frequently. This cost is in fact much lower than what it should be, as even sick employees often come to work, given the need to keep earning to support their families.

Employees' physical and cognitive performance take a hit due to air pollution. Business heads estimate that employee productivity decreased by 8-10 per cent on high pollution days, costing USD 24 bn. in 2019. Workers often make up for these by working long hours. This loss is equivalent to the production of the entire pharmaceutical industry in India. As employees work overtime to cover up for lost productivity, the cost continues to exist but in the forms of burnout, attrition, and increased difficulty on HR managers to attract talent. The decreased cognitive functioning due to pollution results in a seven times higher impact for cognition-intensive sectors such as investment banking, software development, sectors where the dependency on complex mental tasks for output is highest. 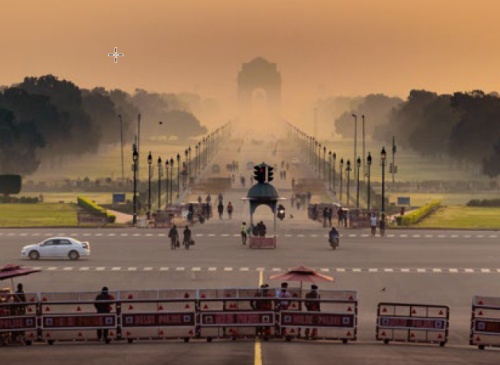 Picture: PM2.5 concentrations in Delhi are more than 10 times the WHO's public health standards.

Air pollution diminishes India's strength of being a large consumer economy by reducing consumer spending by 1.3 per cent; this cost us USD 22 bn. in 2019. As air pollution rises, consumers avoid exposure to pollutants, akin to what was observed during the COVID-19 pandemic. Sectors that comprise more discretionary purchases have fewer online substitutes, and where time foregone is revenue foregone, they are most hit. Apparel and food (including restaurants) bear roughly 50 per cent of the overall cost, reminiscent of consumer behaviour in COVID-19.

Air pollution contributes to 18 per cent of all deaths in India. Not only does premature mortality devastate our current workforce, but it also impacts the workforce of the future. As the median age of India's population increases from 27 in 2019 to 32 in 2030, its susceptibility to air pollution will increase, raising the question of a sub-optimal workforce.

These effects, while devastating on their own, become even more so combined. It changes across sectors as well as cities: the IT sector lost USD 1.3 billion to air pollution, saw a 10 per cent decrease in attendance on bad air days, three per cent reduced productivity, and even faced 28 per cent higher hiring challenges.

These effects impact growth. An Indian IT company in Delhi loses 33 per cent of its competitive advantage over a company in the Philippines due to air pollution. Tourism saw a 1 per cent decline in GDP, costing USD 2 bn. International tourists increasingly re-consider travel plans to India, with pollution being a top concern. This translated to 820,000 jobs lost in tourism and ancillary industries.

Delhi faces 275 days of unhealthy air with a six-fold rise in respiratory medicines' sales during bad air quality days, and nearly 40 per cent preferring to leave Delhi altogether if they could. Migrant workers find it more challenging to adjust to the air quality, and see a higher attrition rate. With CEOs' cognitive decision-making ability located in Delhi compromised by pollution, decision-makers value proposition comes into question.

Gurgaon, the start-up hub of the North, has seen many of its start-ups opting to move or expand to other cities, citing air quality as a concern. Its IT companies are six per cent less productive than peers in the south of India. Gurgaon's much-touted 'medical tourism' comes under question, with 64000+ cases of respiratory ailments being registered in a single hospital in 2015.

Kolkata, the gateway to the east, has seen air pollution suffocating its transport system. Low visibility caused by air pollution delays nearly one out of eight flights, and also causes shipping and cargo handling delays. Kolkata's MSME and manufacturing base sees its productivity hit due to the high exposure to outdoor air pollution that workers face.

It is time to address the elephant in the room - air pollution. India has already made strides in its commitment to the Paris Agreement on climate change and its commitment to the environment. With the USD 95 bn. cost figure attached to pollution, the experience of the pains of a pandemic, and the short period during which we saw beautiful blue skies in our cities, we now know what's at stake. Business advocacy and support is a must for India to tackle this head-on. It is time businesses start seeing air-pollution on the cost side of their profit-and-loss statements.

Gaurav Gupta is a Partner and Asia Director at Dalberg Advisors. This article is extracted and adapted from the executive summary of a recent report titled, "Air Pollution and Its Impact: The Silent Pandemic" by The Confederation of Indian Industry, Clean Air Fund and Dalberg.