A farming family holding 27 acres in Vidarbha has become a marginal landholder in a span of few years, and a vicious cycle of usurious debt robbed their lands and hopes. There are hundreds of others in the lurch similarly. The farming crisis has different shades of exploitation; Jaideep Hardikar presents one.
18 January 2006 -

Fubgaon, Amravati: The Kitukles had hit the nadir of their desperation, and there was only one thing left to try. It was their only hope out of the crises, they realised. So, thirty-year-old Babita Kitukle handed over her mangal-sutra to her husband Vilas. Mortgaging it would fetch them Rs.500 - an amount enough to lodge a complaint with the police, and do the paper work in which lay their hope. But that too has been futile; a month later the Kitukles are still waiting for the police at the block headquarters to act decisively on their complaint.

"This was the last option," holds Babita, the family's rallying point. "We had no cash. We decided to mortgage my mangalsutra to raise some money for paper work and lodge a police complaint," she adds. 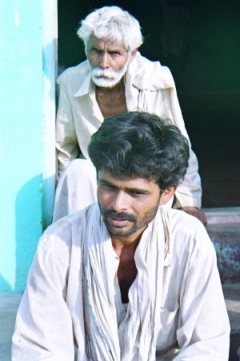 Inheritor of debt: Vilas with his father Ambadas Kitukle. (Picture by Jaideep Hardikar).

Babita hasn't lost hope yet. Vilas had given up in between, but he is hanging on now. Having twice attempted suicide in the past month, the 35-year-old farmer in Fubgaon is lucky to be alive. But villagers say he may attempt to end his life again. He is perilously on the edge, to be next on Vidarbha's growing list of farm suicides in the cotton belt.

"We are with him," declares the village veteran and a Shetkari Sanghatna activist Babuji Patil Kitukle. "Don't lose hope," he tells Vilas and Babita. The couple is clinging on to a fresh hope of retrieving their 19-acre land grabbed by two private usurers. Maharashtra deputy chief minister R R Patil, who also holds the Home portfolio, had ordered the police to "skin the private money lenders", who are exploiting the gullible farmers. Two months since that order, close to 600 private unlicensed moneylenders have been booked and arrested in Vidarbha. The Kitukles hope the police would book their tormentor and help get back their fertile land.

"The same money lenders have similarly grabbed land of other peasants too," says Khushal Bhorgade, a dalit farmer. Bhorgade lost his land to a lender, and is now trying to retrieve it by lodging a police complaint.

Back in their small house in this village, about 50 km from Amravati, gazing at the ceiling listlessly while lying on his bed is Vilas's 65-year-old father Ambadas, a farmer who worked very hard in his youth. "He has become insane; he lost his mental balance in 1998 when we got our first shock," says a worried looking Damayanti, Vilas's mother. That year, this family suffered staggering losses in their 27-acre farm. Steeped in worries and harried by private lenders, Ambadas crashed mentally. He stared at losing his five-acre land mortgaged with a private moneylender at Chandur Bazaar in 1989. He can't speak now, but his condition does.

"I had not dreamt that we'll have to go through this," she Damayanti, squatted on the floor. "When I married him, our combined family owned 70 acres of the most fertile land, we did not depend on the market for any thing," says the frail woman, a shadow of distress and despondency.

Vilas, the youngest of Ambadas' three sons, inherited the debt from his father. His elder sons are employed with private companies in Pune. When Ambadas went insane, the usurer mounted pressure on Vilas to repay his debt or allow him to sell off the mortgaged land. In nine years, the Kitukles had already repaid a little over Rs. One lakh as interest on the principal amount of Rs 30,000, but the unscrupulous moneylender demanded his capital amount back with more interest. "He had an eye on the land that bore about 400 orange trees," says Vilas. "I resisted him and kept paying interest in the successive years despite bearing huge losses in agriculture," he recalls.

To salvage this land, Vilas went to other Sahukar in 2000, and borrowed 60,000 against his two-and-a-half acre land that was registered as a sale deed against the loan (by this time, mortgages were passé and land sale was in). Vilas immediately paid that money to the first sahukar, Munot, with the hope of getting back the five-acre plot of farm. "He did not return our land papers still; he had mounted more interest on it." In the next 16 months, Vilas paid an interest of Rs 1.15 lakh to the second sahukar, who he identifies as Rajesh Chandak. Incidentally, this sahukar was Vilas's classmate till tenth class. Chandak left studies after 12th, while Vilas had to drop out after passing his tenth. "Chandak wanted to sell my land to a third party, but I resisted. This was the best plot I had. I told him that you return me this one and take another plot of eight-acre."

"When I married him, our combined family owned 70 acres of the most fertile land, we did not depend on the market for any thing".

•  P Sainath: Crisis in Vidarbha
•  Another farmer ends life
•  No cheques, no balances
•  The end of innocence

After much persuasion and help from a middleman, Vilas got back his two-and-a-half acres, but lost his eight acres. The cost of that land, going by the market rate then, was Rs 1.5 lakh per acre, say the villagers.

"I was desperate to retrieve my best plot, and there was no purchaser for my eight acres then." The eight-acre plot he lost to the lender had about 950 orange trees. Vilas says the sahukar agreed to pay his outstanding bank loan and electricity bill together amounting to Rs 1.2 lakh, and settle his own loan that had scaled up to Rs 1.15 lakh in this deal. Thus, Vilas lost his eight-acre land for a paltry Rs 2.7 lakh, managing to get back his previous land papers for which he had already shelled out an interest of Rs 1.15 lakh on the principal amount of Rs 60,000.

That deal was struck in May 2000. In August the same year, Vilas sold six more acres of his farm to Chandak for Rs 80,000. "We needed hard cash again, and I could turn to no one but him. The banks had refused to give us loan for some reasons. From that amount I repaid a small loan borrowed from a villager and invested the remaining in farm," he says.

While these developments were unfolding, the first Sahukar mounted his pressure on Vilas to relinquish the five-acre land mortgaged with him. Finally, Vilas gave in 2002. The five-acre plot went out of his hold.

There were two reasons for Vilas's crisis. One, he was strongly in the clutches of the two usurers. And two, he had suffered huge losses in 1999 and 2000, when he sowed onion after laying a pipeline on his farm for irrigation. That investment was huge. "I got a good crop that year, but the prices of onion had crashed phenomenally," he laments. Vilas had to sell 500 quintals of onion for Rs.30 a quintal. The previous year onion prices were Rs.500 per quintal. Per quintal, he suffered a loss of Rs 470. In 2003, he raised a good orange crop, but just before plucking, a hailstorm destroyed the fruit irreparably. "We could have settled all our loans that year, but destiny had something else in store for us," he laments.

For the sahukars it came as a golden opportunity to wrest the prime land of the Kitukles. "This year, Chandak earned Rs.5 lakhs from his orange orchards," says Vilas. In all these years, Vilas' elder brother gave him about Rs 1.5 lakhs to be pumped in agriculture, and all of that money too went in repaying loans. Also, he spent heavily on his father's illness.

Finally, in 2004, Vilas had to sell three-and-a-half acres more. This time to the first lender. That fetched him a price of Rs.43,000 per acre from which he cleared all his remaining liabilities. "I've finally settled all my debts", he says. But he's bankrupt. All that he's left with is a little less than three acres of land. And the cotton that he grew on it has fetched nothing. "For the last seven-eight years we haven't celebrated any festival," murmurs Babita. "We had no peace of mind. Our land slipped out of our hands like sand. We kept paying and paying hoping for one good crop that would bail us out. It did not happen. Poor prices have done us in."

Babita may not know that a series of government policies also had something to do with their woes. Dramatic declines in rural credit, rising input prices, dwindling output prices, lack of irrigation or processing of agriculture produce in the region, and declining state investments in the sector, have all been responsible for the misery of not just this family, but tens of thousands of other cotton farmers of Vidarbha. Why did the web of private lenders spread in the first place? As farmers' leader Vijay Jawandhia puts it: "It was the lack of availability of institutional credit at low interest rates that added impetus to private sahukari in the region." The interest rates on cooperative bank loans too add up to around 20 per cent per annum, he points out. "Is the government not a sahukar then?"

Now, the state government's purported intention to act severely against the Shylockian moneylenders has brought a little cheer to the Kitukles who lost their precious land. The indigent family may never know the difference between the sahukar and sarkar, though. Those who do say there is hardly any; the sahukar and sarkar are simply two sides of the same coin.