Why the land acquisition law is a threat to several others

The government’s push to the amended land acquisition law overlooks provisions in other acts that address closely related issues such as food security and conservation of biodiversity, writes Shalini Bhutani.
04 March 2015 -

The government’s thrust on the amended land acquisition legislation -- the Right to Fair Compensation and Transparency in Land Acquisition, Rehabilitation and Resettlement (LARR) Act, 2013 – creates a high level of uncertainty around the promises made in other laws and regulations.

The National Food Security (NFS) Act, 2013 is one such. The Act was gazetted on 10 September 2013, though deemed to have come into force on 5 July 2014. While there are many issues that hold-up its pan India implementation, the proposed changes to the LARR Act 2013 may also come to bear upon its intended objectives, if the changes do indeed speed up land acquisition.

This is because the LARR Act will decide not only the fate of agricultural land, but of all potential food-bearing land in the country.

The implementation of another piece of legislation - India’s Biological Diversity (BD) Act 2002, meant to secure benefits for local people, forest dwellers and tribal farmers – also stands to be impacted by the changes in the land law.

The whole concept of ‘benefit sharing’ in the biodiversity regime and a set of ‘new’ guidelines for it under the BD Act, issued by the National Biodiversity Authority, work on the assumption that local biodiversity management committees have land under their territorial jurisdiction. But biodiverse lands are not immune from acquisitions and this would evidently impact conservation.

Most of our food comes from land. As per World Bank statistics through 2010-2014, 60.3 percent of the total land in India was agricultural land, though the trend is declining. Reportedly 70 percent of India’s population depends on agriculture for their livelihood.

Food security as per the NFS Act means ‘the supply of the entitled quantity of food grains and meals as specified’ in the law. The food grains whether rice, wheat or millets, need land on which to be sown and grown.

We need a food policy, which envisions the country’s future land needs for feeding its people. A land law and policy ought to complement that vision. In the recent past policy has encouraged Indian industry to seek cultivable land overseas (such as in African states), though the government does not admit it as a food security strategy.

According to the Food and Agriculture Organisation (FAO) agricultural land is that which is arable – cultivable and suitable for growing crops, plus that on which there are either permanent crops or which is under permanent pasture. The LARR Act, 2013 gives an even more broad definition of ‘agricultural land’. Securing such land (from any non-agricultural use) means securing food supplies. 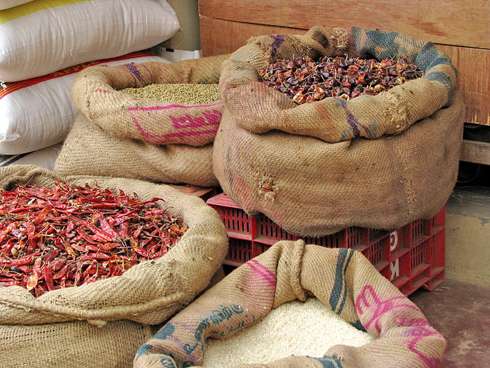 Section 31 of the NFS Act, (read with Schedule III) puts a legal obligation on the Central, state governments and local authorities to advance food and nutritional security. With that intent, they are required as in the said Schedule to prohibit unwarranted diversion of land and water from food production.

Securing local food supply also ensures food sovereignty. In the absence of that, the central and state governments will have to turn increasingly towards international markets for meeting the country’s food needs.

A large proportion of India’s food vulnerable populations are not only small and marginal farmers, but forest-dwelling communities. They don’t rely on the public distribution system or arable land alone, but supplement their diets with uncultivated food derived from forests and forested areas.

The definition of ‘affected family’ eligible for compensation in the existing land law of 2013 includes gatherers of forest produce. Yet there is little or no valuation of forests as food sources when diverted for ‘non-forest purposes’.

Even the ‘special provision to safeguard food security’ (Chapter III, Section 10) in the LARR Act of 2013 applies only to ‘irrigated multi-cropped land’ as a source of food. This too is considered substitutable by culturable wastelands according to the Act. Areas of uncultivated food that fall outside the notion of ‘net area sown,’ but are nevertheless vital in the local food chain, need to be accounted for as food areas.

The National Biodiversity Authority (NBA) issued Guidelines on Access to Biological Resources and Associated Knowledge and Benefit Sharing Regulations on 21 November 2014. The NBA was established in 2004 under India’s BD Act and it functions under the environment ministry.

Since its inception it has struggled to put together a benefit sharing mechanism by which local people in biodiverse lands of India can harness benefits – monetary or non-monetary – from those who access/use bio-resources from their areas. The guidelines took a good long decade to be finalised. 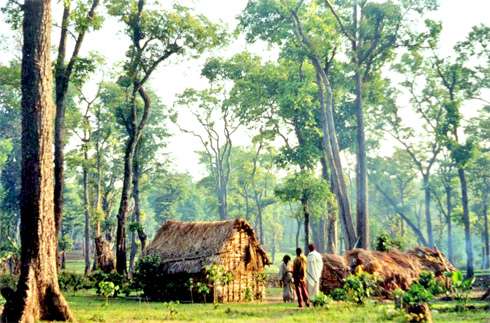 A forest settlement in the Western Ghats. Pic: Smitha Krishnan via Wikimedia

In force now, these guidelines require anyone accessing biological resources, including resources harvested by a forest dweller, tribal cultivator or gram sabha to follow a certain prescribed procedure. This entails a prescribed Form I to be filled and submitted to the NBA along with the deposit of Rs 10,000 as fees. Monies collected are meant to be used both for communities and conservation.

But if the resource-dependent households/communities themselves lose access to the land, the Benefit Sharing Guidelines become redundant as a fund generating mechanism as NBA sees them. The claimants, if displaced, will no longer remain the legally defined ‘benefit claimers’ of that area, who can provide access to biological resources and seek ‘benefits’ in return.

The BD Act [Section 2(a)], among other things defines ‘benefit claimers’ as those who are conservors of biological resources. Experience has shown how difficult it has been to identify benefit claimers in an area even in ordinary circumstances. Whether they are reinstated as possible benefit claimers in the resettlement areas remains a moot question, since the BD Act does not deal with cases where land is acquired.

If and when biodiverse farming lands or food-giving forests are replaced with industrial activities or infrastructure projects, a direct local source of food and biodiversity is at risk of being lost forever. For those who depended directly on the (acquired) land, the situation will become even more critical if their post-acquisition social and economic situation does not improve.

Social impact assessment means factoring all this in. By making it easier for large industry to acquire lands, the government might also make it more difficult for itself to feed its own people, nurture their social moorings and safeguard their bio-cultural connection with their lands.

In cases of apparent clash of laws and their intended objectives, it is to be seen if Section 103 of the LARR Act will aid in final decisions. While the LARR Act provides that its provisions will be in addition to and not in derogation of, any other law in force, the food security and biodiversity conservation laws themselves need to be saved from redundancy.

The author is a legal researcher and policy analyst based in Delhi. Shalini is also one of the coordinators of the pan-India Biodiversity Campaign.