The proposed Hubli-Ankola railway line in Karnataka originally stirred up criticism because if built, it would pass through the ecologically fragile Western Ghats forests. Matters recently came to a head when evidence emerged of the Railways proceeding to construct a part of the line without forest clearance. Kanchi Kohli has more.
07 November 2006 -

Clearly, the Hubli-Ankola Railway Line is an important project for both Ministry of Railways and Government of Karnataka. The Bellary-Hospet region in Karnataka is an important iron ore and manganese belt from where several mining operations need to transfer their extracts to the coastal areas for export. Without it, there is a critical link missing between Karwar port and its hinterland in northern Karnataka, which could boost traffic of iron ore, and this has been reported in the Business press as well.

But this railway line has come under criticism from the very time it was first proposed. One of the main reasons is that the line passes through the ecologically fragile Western Ghats forests. In the last two years this controversy around the project has heightened. The primary reason for this is the refusal of the grant of the forest clearance by the Ministry of Environment and Forests (MoEF). As per the Forest Conservation Act, 1980, any project that requires diversion of forest land for non-forest use, needs to seek permission from the central government. No construction work on the project can begin without this clearance being in place. 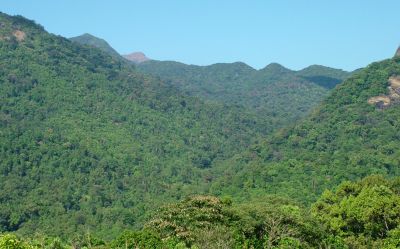 Photograph of the area to be affected by the railway line. Pic: Pandurang Hegde.

According to the details mentioned in the proposal submitted by the Principal Secretary (Forests, Ecology and Environment Department), Government of Karnataka to the Ministry of Environment and Forests (MoEF) in New Delhi, 965 hectares of forest land is needed for laying a 168 km-long new broad gauge rail track in the Western Ghats; the line will fall in the Karwar, Yellapur and Dharwar Forest Divisions of Karnataka. It appears that the length of the line has also undergone a change since Vajpayee's speech of 1999. Notably, the letter (No. FEE 237 FGL 2002) dated 29-11-2003 was signed by the Principal Secretary, but does not carry the name of the official. According to news reports from that period, the official was N Gokulram.

The proposal contains other details about the railway line. The estimated expenditure of the track is Rs.1153.08 crores. The total land requirement for this project is 1384.40 hectares out of which 965 ha. is reserved forest as noted earlier, 173 ha. is wetland, 221 ha. dry land and the rest is miscellaneous land. 120 kms of the 168 kms of the railway track is to pass through reserved forests.

The forest land required for diversion is huge. The officials of the Karnataka Forest Department (KFD) from the Principal Chief Conservator of Forests, the Conservator of Forests of different forest circles as well as the Deputy Conservator of Forests of the different forest divisions involved, had unanimously opined that diversion of forest land would clearly be a tragedy and will severely impact the biodiversity of the pristine Western Ghats stretch and also impact the hydrological systems of the perennial rivers flowing through the forests. Officials of the KFD have also observed that the railway track will only help the iron and manganese mines in of Bellary-Hospet area and will not be of much help to the local people as no passenger traffic is envisaged. Again, the names of these officials were not found on the letters. The Principal Chief Conservator of Forests of the KFD during the 2003-4 was S N Rai, according to an earlier India Together report.

The Western Ghats stretch from the Tapti river in the north to Kanyakumari in the south, along the west coast of peninsular India through the states of Gujarat, Maharashtra, Goa, Karnataka, Tamil Nadu and Kerala. The Western Ghats zone is one of the 25 biodiversity 'hotspots' in the world and is one of the major tropical evergreen forested regions in India, exhibiting enormous plant diversity.

About 4000 species of flowering plants occur in the region, which harbours nearly 27 per cent of the total flora in India. Among these, 1500 species are endemic. The Western Ghats region is a major genetic estate with a rich biodiversity of ancient lineage.

Based on their feedback, the MoEF rejected this project on merit. Again, without putting a name on the rejection letter (F.No. 8-134/03-FC) dated 10/11-06-2004) an MoEF officer in New Delhi wrote to the Principal Secretary (Forests) at the GoK: "There is a marginal difference of 18 km in the distance between the existing and the proposed railway track for which such a large area of beautiful forests and biological hot-spot eco-fragile Western Ghats should not be sacrificed and it will also not help to local people as no passenger traffic is envisaged." The letter affirmed that the proposed line was mainly for transportation of iron and manganese ores from Bellary-Hospet region. The official went on to note that a committee at the Ministry also considered that the mines would be continuously depleting resources, and "hence the utility of the proposed railway line may not exist in the long run."

This is where the real controversy begins. As mentioned earlier no work on the railway line can start (whether on forest or non-forest land) if the forest clearance itself is not in place. The issue becomes even more serious if work is carried out after a forest clearance is rejected on merit.

But the South Western Zone of the Ministry of Railways did not seem to think so. Work on a part of the railway line has been carried out in full swing.

According to a report in The Hindu Business Line on 25 May 2006, the SWR General Manager, T N Perti admitted that the work between Hubli and Kiravatti has been undertaken on the Hubli-Ankola railway line. Around Rs.60 crores has been spent on the project till March 2006. It is also admitted that forest clearance is awaited from the MoEF.

The issue was brought to the notice of the Central Empowered Committee (CEC), a monitoring body constituted by the Supreme Court of India in 2002. The CEC examines in detail violations of the orders of the apex court in the ongoing T N Godavarman Thirumulkpad vs Union of India case and other violations of forest and wildlife laws (See: www.forestcaseindia.org). The application was filed by two Karnataka based NGOs: Parisara Samrakshana Kendra (Pandurang Hegde), Sirsi and Uttara Kannada and Wilderness Club, Bangalore. The application was filed with the legal support of Ritwick Dutta of the Lawyers Initiative for Forests and Environment (LIFE).

On 13 September, the matter was first presented before the CEC and all the facts were highlighted. The representative from the Railways, Rajesh Aggarwal, Director (Work) admitted to the CEC that construction activity was taking place in 40 km stretch of non-forest land. The CEC questioned as to whether the Railways was presuming that the overall forest clearance for the project would be granted afresh and whether that is why the construction activity was being carried out. What if the forest clearance is not granted, will the project still be viable? Aggarwal stated that that even if the forest clearance is not granted, the railway line will not become redundant, and there is a contingency plan in place.

However, the CEC was deeply concerned that the construction activity was being carried out in violation of the law. This is especially so when the application for grant of forest clearance had already been once rejected on lack of merit by the MoEF. The CEC asked the Railways to submit a copy of the approved contingency plan and meanwhile stayed any further construction of the railway line. It also directed the MoEF not to decide afresh on the forest clearance as long as the matter remained pending before the CEC.

On 17 October, the application came up for hearing again. The issues remained the same. The Railways had yet not submitted their response in the case and stated that it was in the process of verification and will be submitted soon. They did not submit their contingency plan. Instead, the Railways' representative attempted to give more insights into the importance, significance and need for the railway line. However, the CEC was clear on its stand. The Forest Conservation Act, 1980 had been blatantly violated as work had proceeded despite clearance being rejected. The CEC also asked for the names of all the officials involved in the decision that the work be continued with no forest clearance.

Above all this, what was of utmost relevance to the CEC was whether the work on the project had stopped as directed at the last hearing in September. The Ministry of Railways placed on record that it indeed had. The applicants will be looking to verify this on the ground. The next hearing in the case is today, 7 November 2006. It will be intriguing to see what responses the Railways file, what observations are made, and what track the case heads on.