While much of the attention around the Sardar Sarovar Project has focused on Gujarat, Maharashtra and Madhya Pradesh, there is a lot to be learned by looking at the ways things have turned out in Rajasthan too. That state was promised enough water to irrigate 0.135 million hectares land in the Narmada Water Dispute Tribunal Award. Recent propaganda material speaks of additional drinking water benefits to 124 villages, many in Jhalore and Balmer districts. For these benefits to be realized, Rajasthan needs to build 74 kms of branch canals and 1403 kms of distributary network canals.

All this, of course, costs money. As per original cost estimates, Rajasthan was required to pitch in Rs.4675.3 millions, about 40% of this for construction of canals and the remainder as payment to Gujarat as the state's share in the costs of the overall project. By 1996-'97, this estimate had risen to Rs.5522.2 millions, nearly a fifth higher than originally planned. And as on March 31, 1999 the Rajasthan government had spent Rs.502.8 millions on works undertaken in Rajasthan; it has paid Rs 1079.8 millions as shared cost in the project to Gujarat and other nodal agencies.

Are these costs consistent with the projected total? Sadly, no. While the benefits from the project to Rajasthan still remain in the distant future, there is plenty of evidence that the spending is way off track, partly because of corruption in the irrigation department. In a recent report, the Comptroller and Auditors General of India presented a detailed analysis of the scam tainted department. The CAG report for the year ended on March 31, 1999 for Rajasthan (Civil) details how authorities have already spent on construction of road bridges twice the amount estimated, on buildings seven times the estimate, and on constructing a siphon across the river Sukhi eight times the amount originally planned. 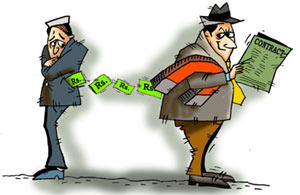 Taking a closer look at the last entry - the construction of the siphon at eight times the projected cost - the CAG report points out that tenders were invited and negotiations held prior to the estimates being made, and this resulted in the work being awarded to the contractor at rates 99% higher than sanctioned. That resulted in overspending by Rs.70 millions.

There's more. After receiving technical and financial bids, the Chief Engineer made revisions that led to a substantial financial loss to the public exchequer. According to the original plans, a construction contractor would be paid Rs.26467 per Metric Tonne of steel, so that he could buy the steel needed for the work. Later, however, a new condition was inserted in the agreement which provided for government itself to supply steel at the much lower rate of Rs.15000 per MT. What actually happened is this: though the contractor did not buy the steel, the Executive Engineer made payment at the agreed rate of Rs 26467 per MT. And as the government decided to provide the steel itself, the money was recovered from the contractor - but this time at the lower rate. The Department thus ended up paying Rs 9.7 million to the contractor for the steel supplied by itself!

The CAG identifies who's responsible, saying "The Blame here goes amongst others to the committee headed by the Chief Engineer (I) who never spelt out clearly that in the view of their revised decision the scope .... is reduced extensively to only labour and carriage charges." CAG wrote without mincing words, "In these circumstances it is for the Government to investigate and decide as to who were the persons/officers responsible for this lapse which resulted in Government incurring a clear loss of Rs 9.706 M by way of extra payment to the contractor."

A sample of other lacunae found by the CAG shows that gross mismanagement and disregard for the rules and guidelines are common.

"In these circumstances it is for the Government to investigate and decide as to who were the persons/officers responsible for this lapse which resulted in Government incurring a clear loss of Rs 9.706 M by way of extra payment to the contractor."

This CAG report presents a vivid account of violations of codes while assigning the public works to contractors, and of extending undue favours to contractors at the cost of public finance. All this, however, still remains caught up in the typical last line, one that has become a standard refrain for the past few years, "The matter was referred to the Government in February 1999 and July 1999, reply had not been received (September 1999)". And predictably, the state government has shown little interest in taking punitive action against the officials responsible.

The state government's generosity and blindness to this crime is being underwritten by New Delhi, which has agreed to provide 3000 millions to bring the Narmada waters to the desert state. This money is a handout made possible by tax collections around the country, but Central politicians know that not many voters are conscious of such transfers of wealth to their prefered state governments. State parties too rarely object to seeing their money frittered away on the grand crooked schemes of others, because their own practices too need to be indulged from time to time. The only person who really pays a price is the taxpayer, whose money is simply drained into various pockets in a long and greasy chain.

As for the CAG, when will the institution move from merely auditing accounts and reporting unresponsive attitudes, to regaining its status as a watchdog of democracy by asking governments to stop funding projects riddled with corrupt practices?