The new law's provisions are infusing into the proceedings of the Gram Sabhas a democratic character that they have lacked so far. From a conservation standpoint too, the law is proving to be positive, writes Tushar Dash.
19 August 2008 -

There are many firsts in the The Scheduled Tribes and other traditional forest dwellers (Recognition of Forest Rights) Act, 2006 (hereafter, Forest Rights Act) ... For the first time, the law recognises and vests forest rights in scheduled tribes and other traditional forest dwellers, thereby undoing the historical injustice done to them. Also for the first time the Act provides for 'Community Rights' and rights over 'Community Forest Resources', thereby ensuring rights and ownership of tribal and traditional forest dwelling communities over 'Common Property Natural Resources'. A democratic model of biodiversity conservation is also envisaged in the law, in the form of Critical Wildlife Habitat in Sanctuaries and National Parks.

Recognising such rights for forest dwellers brings along a challenging process for determining what exactly these rights are, and developing the processes to protect them.

Many of these provisions signal a break from the failed history of past conservation laws passed by the government. Typically, conservation laws in India have been written for top-down operations; in contrast, by vesting primary authority in elected local government, and identifying the specific things the gram sabhas shall do, the Forest Rights Act has put into place, for the first time, a genuine democratic and participatory process in conservation efforts.

Gram Sabhas, which in the past used to be forums for the village elite and vested interests, are turning into vibrant forums for marginalised communities to discuss their forest rights.

The importance of this cannot be over-stated. This has in-built the potential to strengthen the units of local democracy and governance. It is expected that the process will empower and strengthen the local self-governance at the village level to play an important role in natural resource conservation and management. With the enactment of the Panchayats (Extension to Scheduled Areas) Act (PESA) in 1996, it was hoped that the decentralised government structure that is common in non-tribal areas would quickly take hold in designated 'Fifth Schedule' areas as well. But that hope has been slow to be fulfilled. The Forest Rights Act, it is hoped, could change that, and accelerate the process of decentralized local governance.

The early signs from the implementation of the law are encouraging. Since March this year, when Palli Sabhas in Orissa began to be convened for the first time, a sea change is visible in villages across Orissa. In Sarda, a tribal-dominated village in Sambalpur district, residents confirm that they have witnessed a remarkable change in the functioning of the Gram Sabha since the Act came into force. In the history of the village, there had never been a Gram Sabha which discussed such things as 'community rights' of the poor, or 'community forest resources' and their conservation. But the Forest Rights Act requires exactly such things to be discussed and agreed upon in a representative way.

Clearly, the law's provisions are infusing into the proceedings of the Gram Sabhas a democratic character that they have lacked so far. In village after village, it is observed that Gram Sabhas, which used to be forums for the village elite and vested interests, are turning into vibrant forums for marginalised communities to discuss their forest rights. 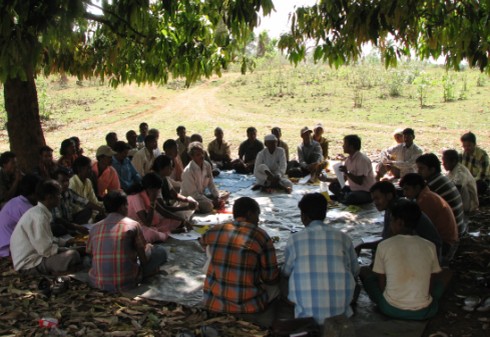 From a conservation standpoint too, the law is proving to be positive. In Orissa there are more than 10,000 forest-protection groups actively involved in efforts to conserve the forests and biodiversity of the state. The majority of these resource protection initiatives are self-initiated, and rooted in the culture and tradition of their local communities, a fact which is also acknowledged by the government in its Joint Forest Management resolutions. Nonetheless, until now these Community Forest Management groups have never been a part of the mainstream conservation process carried out in the state. Nor has there been any sincere attempt by the government to create space for these self-initiated community based efforts in any of the law and policy.

But the Forest Rights Act has forced some changes on this front, because it explicitly identifies community-based conservation as a legitimate right. Not only that, the Act has also specific provisions for empowering those who hold forest rights, and for checking activities detrimental to the forest and biodiversity. These provisions have opened up new opportunities for many Community Forest Management groups to assert their right of conservation under the law. These communities have started claiming their rights of protection and conservation of forest resources and biodiversity and there is a hope among these groups that through the Act the holistic models of protection and conservation developed by them would find legal recognition.

The law has also created new hope for endangered communities and cultures. Take the Dongria Kondhs, for example. They are identified as a Primitive Tribal Group (PTG) in Kalhandi district of Orissa. Niyamgiri, a biodiversity-rich hill range, is the sacred abode of this community. Every facet of their community life, such as livelihood, culture, tradition and even their very existence are woven around the Niyamgiri hills, which have been protected and nurtured by the community as sacred grooves. But the onslaught of 'mainstream' development now threatens this land, and with it their unique culture and tradition (see here, here, and here).

Orissa has thirteen such Primitive Tribal Groups, each distinct in its own way. Most of these are similarly poor, and vulnerable to mining and other activities that seem to have no regard for their traditional rights. However, without a legal framework for recognition and protection of their cultural rights, they have been powerless to resist. Some of that has now been addressed by the Forest Rights Act, which has specific provisions for recognition of traditional and customary rights of the Primitive Tribal Groups. That has brought new energy to the communities in their resistance efforts. In areas where these communities live, locals have started claiming their traditional and customary rights using the provisions of the Act.

There is also some hope on another front: namely, that the law could help stem dissent and extremism in tribal dominated areas. A report of Planning Commission, titled Development Challenges in Extremist Affected Areas, hoped that effective implementation of 'Protective Legislation' will strengthen access to resources by forest dwelling communities, thereby reducing their sense of alienation, and steering them away from conflict and extremism. Already, as noted above, forest dwellers have began using the provisions of the Act to make democratic claims to their rights under the Act; if these are upheld, a significant reduction in violence could indeed come about.

While there is much optimism following the enactment of the Forest Rights Act, there are still challenges to be overcome before its provisions deliver strong gains to local communities. In many case, the positive changes observed so far have taken place only because of the active role played by civil society organisations and people's informal socio-economic networks. The government's leadership, in contrast, has been much less evident. The true test of the Act lies in ensuring its benefits even in areas where civil society groups are absent. Disappointing, the government has not made noticeable efforts to advertise the benefits of the law, and in many areas people are still not aware of the Act.

To sustain the early gains from some communities, a concerted effort at all levels is needed, involving both the government and civil society.

Tushar Dash works with Vasundhara, a non-government organisation in Orissa that focuses on Natural Resource Governance.