A filming crew's damage to the Kambalakonda wildlife sanctuary is brought before the courts. But how did it get this far in the first place? Kanchi Kohli reports.
19 April 2011 -

Who is at fault? A private film company which allegedly cleared brushwood and build permanent structures in a wildlife sanctuary, or the Divisional Forest Officer (DFO) who irregularly permitted it, without having any jurisdiction to do so. And why does a debate like this only arise when a challenge is brought in the courts?

On 25 January 2011, E A S Sarma, a former Secretary to the Government of India and currently the Convenor of Forum For Better Vishaka (A citizens initiative to save the ecology of Visakhapatnam and neighbouring areas) noticed that construction was underway in the Sambuvanipalem reservoir. Further investigation revealed that the activity being carried out was in violation of both the Wildlife (Protection) Act, 1972 and orders of the Supreme Court of India pertaining to protection of natural environments.

The reservoir and the construction activity were both located within the notified Kambalakonda Wildlife Sanctuary a few kilometres from Visakhapatnam. The sanctuary has been under the jurisdiction of the Andhra Pradesh Forest Department since 10 March 1970, and prior to that under the Maharajah of Vizianagaram. The sanctuary is nameed after the local hillock "Kambalakonda" and is a dry evergreen forest mixed with scrub and meadows; it covers an area of 71 square kilometers. While famed for its leopards, the area is also known to contain numerous examples of the diverse flora and fauna of the Eastern Ghats.

The activity detected in January was being carried out by Sree Keerthi Combines, a Hyderabad-based film company which had leveled the ground by clearing bush growth in an island to put up the sets required for its production. This was done by spreading quarry dust and red earth brought from outside the sanctuary. According to the report of the Additional Principal Chief Conservator of Forests (Vigilance) who carried out a site inspection in the area, the soil-leveling was to the extent of roughly 600 cubic metres, and some of the soil was also used to fill up the nearby lake to facilitate better vehicle movement.

A site inspection carried out by the Additional PCCF (Vigilance) made several crucial observations including the fact that the film company had drawn water through an electric motor and also contaminated the water source.

Now for the law, or the lack of its application. First, the film sets of Sree Keerthi Combines were in clear violation of the Section 29 of the Wildlife (Protection) Act, 1972 which stipulates that no destruction of wildlife and its habitat is permissible unless it is for the benefit of wildlife and has the approval of the Chief Wildlife Warden and the State Board for Wildlife. The film studio had permission from the Divisional Forest Officer (DFO), Vishakapatnam, but this officer is not competent to grant such permission under the Act.

Second, the Supreme Court (in I.A No. 548 in W.P 202 of 1995 in T N Godavarman Thirumulpad Vs Union of India by order dated 14.2.2000) had directed that no removal of dead, diseased, drift wood and grasses is permissible in National Parks and Sanctuaries. This order was modified in 2005 to allow some exemptions, but those are limited to activities such as removal of weeds, clearing and burning of vegetation for fire lines, maintenance of fair weather roads, habitat improvement, digging, temporary water holes, construction of anti- poaching camps, chowkies, check post, entry barriers, water towers, small civil works, research and monitoring activities, etc. Certainly not filming! 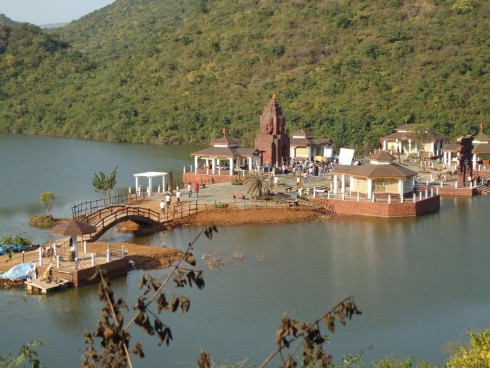 The challenge and the response

Soon after this levelling and tree-cutting was noticed, Sarma, through lawyers Ritwick Dutta and Rahul Chaudhary took the matter before the Central Empowered Committee (CEC), constituted under the forest bench of the Supreme Court to look into such instances of irregularities and violations. The applicants drew attentio to the illegality of the activity and to its potential harmful ecological impact.

In response to Sarma's application, the Principal Chief Conservator of Forests (PCCF) and Chief Wildlife Warden (CWLW) of the area, submitted before the CEC that the order issued by the DFO to the film studio for shooting for 25 days (from 4.2.2011 to 28.2.2011) was irregular, as he was not the competent authority to issue permission inside the sanctuary. Worse still, the permission (illegal as it is) did not include the right to erect sets for the filming. Infact the DFO, on 27 January, had cancelled the permission earlier granted, in response to these violations.

The attention brought by the legal reference has had some effect. The PCCF's submission and media reports indicate that disciplinary actions have been taken against the DFO (Vishakhapatnam), P Ram Mohan Rao. The Range Officer of the area, M Sitapathi Rao has been placed under suspension.

The cancellation of the permission by the DFO was challenged by the film company in the Andhra Pradesh High Court on 7 February 2011. The very next day, the High Court stayed the DFO's cancellation, without giving any opportunity for the State Forest Department to respond. There was no mention at this stage about the violations of the WLPA or the orders of the Supreme Court ,and the film shooting commenced again. The same day the DFO registered a case regarding the violation of the Wild Life Protection Act, 1972. He also issued prosecution orders against the producer and manager of the film company. Perhaps, in the first instance, the Forest Department failed to present its case appropriately to the court.

Even as the film shooting progressed in the month of February, the DFO and the PCCF filed their counter in the High Court stating that the hearing be expedited as shooting was being carried out. It was only around 21 February, after the intervention of the Government Pleader (GP). Forests, Andhra Pradesh High Court that the court observed that if the filming is causing damage to the reserve forests and sanctuary then the permission may be cancelled after giving due notice to the petitioner.

The original permission sought by the film company from the DFO was from from 4 to 28 February 2011, so by now they were at the fag end of their shooting schedule. But a notice did go out to the officials of the film company seeking their reply within 24 hours.

A site inspection was then carried out by the Additional PCCF (Vigilance) who as mentioned above made several crucial observations including the fact that the film company had drawn water through an electric motor and also contaminated the water source. Further, at any given point of time 150-200 people were working within the sanctuary, which was disturbing the wildlife and the tranquility of the area. The improper disposal of plastic and ash due to burning debris was also noticed by the Additional PCCF.

On 22 February the cancellation orders were issued to the film company by the Chief Conservator of Forests, Vishakhapatnam. Sree Keerthi Combines challenged this order too before the High Court. On 25 February the GP, Forests informed the court that only two days of the shooting remained, and this may be permitted, after which the company be given another 10 days to remove the sets, with due permission from from PCCF and CWLW. The court accepted this, allowed the contention of the GP, alongside a bank guarantee of Rs.5 lakhs from the company.

However, the PCCF declared before the Central Empowered Committee that the film company has neither given the bank guarantee nor sought permission as insisted by the court. All the existing semi-permanent structures are in the custody of the DFO, and there is no film shooting underway at present.

On 15 March, when this case came before the CEC, it was held that there was blatant disregard of legal provisions as well as order of the Supreme Court. The order passed by the DFO, Visakhapatnam on 13 January permitting film shooting was not just 'irregular' but incorrect and illegal. The CEC also questioned the fact that when om 09 January 2011 a case was booked against the company for felling and carting brushwood, how did the DFO subsequently give permission for shooting on the 13th of the same month?

Even though explanations were given, the CEC recommended that contempt proceedings maybe held against the Andhra Pradesh Forest Department. The CEC at this hearing asked the forest department to submit an Action Taken Report before the next hearing on 6 April 2011. The final decision and recommendations of the CEC are still pending.

The Forest Department seems to be in a tight spot, whether on account of its own doing or otherwise. Should the department obey the orders of the High court? And would that amount to going against the earlier directions of the Supreme court? To compound this paradox is the fact that no matter what decision is arrived at and whoever is held responsible, the lights, camera and full-fledged action has already caused damage to the ecosystem of the area.