It is often believed that coal-based power plants near the coast, by virtue of their proximity to the sea, do not create any pressure on water resources. Shripad Dharmadhikary’s visit to Krishnapattanam in Andhra Pradesh and parts of Tamil Nadu exposes the fallacy in that.
28 July 2014 -

Krishnapattanam is a small coastal village in Nellore district of Andhra Pradesh. Though figuratively it is a stone’s throw from the coast, the village was blessed with copious amounts of good quality ground water. But Krishnapattanam’s claim to fame lies elsewhere today. It has become the location of one of India’s largest ports, the Krishnapattanam Port, dedicated to the nation on 17 July, 2008.

The port is expected to handle huge volumes of coal, imported as well from other parts of India. The destination for these would be the large number of coal-based thermal power plants coming up around the port.

In more recent years, coal availability has also become a big issue. Coal India Limited, which produces about 80 per cent of the country’s coal has not been able to keep up with the demand. The Coalgate scam has also had a big impact. Given all this, India’s coal imports have been going up. The expectation that a significant part of India’s proposed coal thermal capacity addition will depend on imported coal has also made coastal locations very attractive for thermal power plants.

It is no surprise then, that coastal districts such as Nellore boast thousands of megawatts (MWs) of proposed capacity addition. An analysis of data by the Ministry of Environment and Forests (MoEF) showed that coal based capacity in the environmental clearance pipeline (environment clearance granted or under process) for Nellore district was 22,700 MW, for Kutch (Gujarat) 17,980 MW, for Tuticorin (T.N) 14,000 MW, and for Cuddalore (T.N.) 10,140 MW, to give a few examples. This does not include major projects like the proposed 4000 MW Ultra Mega Power Plant (UMPP) at Cheyyur in Kanchipuram district in Tamil Nadu.

However, as several of these plants come up, the assumption that locating such plants on the coast will take care of the water problems related to coal-based power has proved quite unrealistic, and exposed it as being based on a lack of understanding and assessments of the coastal hydrology and ecology.

A recent visit to some of these areas by the author has shown that the coastal thermal power plants and their related infrastructure is playing havoc with local hydrological systems and the lives and livelihoods of communities which are closely associated with water.

As the construction of the port and several thermal power plants around it started, Krishnapattanam found its groundwater turning increasingly saline. In a few years, it had been rendered completely useless. Now the village is being supplied with tanker water by the port company. But this is not very good for drinking and many families now buy bottled water for drinking and domestic use. 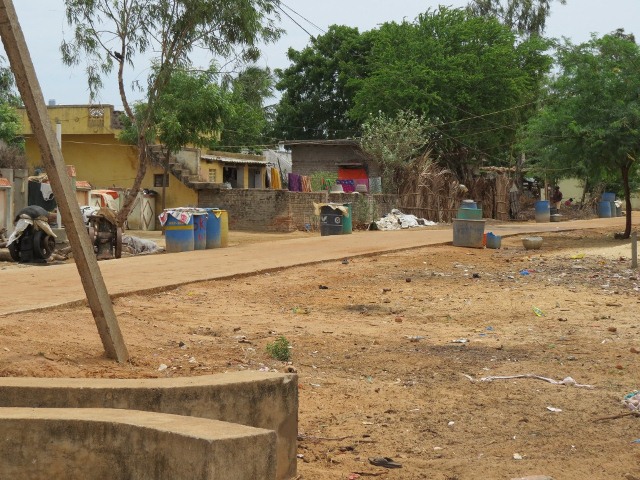 Krishnapattanam has gone from self-reliance in water to complete dependence on tankers and the market. Local people offer two reasons: One, that the dredging activities for the port have created pathways for intrusion of the saline (sea) water into coastal groundwater systems. Second, excessive withdrawals of groundwater for the construction of the port and thermal power plants have led to depletion of groundwater, with falling levels facilitating sea water ingress.

Meanwhile, the nearby village of Gummal Dibba is facing, apart from similar salinisation of its groundwater, a total loss of its main livelihood – fisheries, a fate shared by Krishnapattanam too. The families in this village fish in the nearby Kandeleru creek. The Krishnapattanam port is located at the mouth of this creek.

Several thermal power plants are discharging their waste water, including hot water into this creek. People report that the power plant discharges on one side, particularly hot water, kill the fries (young ones of the fish). On the other hand, the increasing turbidity due to dredging operations, along with other pollutants kill the mature fish. Together, these two have almost totally destroyed the fisheries.

Local residents do not get fish now even for their own domestic use, let alone for the market. Apart from this, fishing in the sea has also suffered as the ships coming in and going out have severely restricted the movements of the fishing boats.

Not being educated, these local people do not get any other jobs. The huge capital investments in the port and power plants that promised development for the local communities have at best offered them jobs of sweepers and security guards, and that too on contract basis, say the people of the region.

To add to this, they complain about the all-pervasive coal dust that settles everywhere in the village and contaminates their water sources.

These two villages are just representative of the larger scenario in the region, and this is the case when only a few of the power plants have started operating and that too, still below their full capacity. The impact would be multiplied many times when all the plants come online. Particularly important will be the problem of ash disposal, which right now is being dumped by the plants in their own premises given that the volumes are now low.

The problems seen at and around Krishnapattanam are a result of an underlying fundamental disruption of coastal hydrology and ecosystems due to thermal power plants, which is likely to manifest in the form of many other impacts.

Coastal hydrology is far more complex than inland hydrology. It has three kinds of waters – saline (sea water), brackish (mix of saline and fresh water) and freshwater. All three co-exist in close vicinity, and all three support different kinds of flora and fauna, and in turn, provide diversified bases for livelihoods. They exist in a delicate balance and interactions, providing very vibrant ecosystems. An example is the creeks, the backwaters, the rivers and estuaries that provide some of the richest and most productive fisheries. Coal-based power plants intrude on this ecosystem and disrupt their balance.

It should be noted that coastal thermal power plants cannot work by themselves. They require the development of large scale supporting infrastructure. This includes the port for getting the coal, and often the very rationale for location of the plant on the coast, as well as a transport system for getting the coal from the port to the plant, which can either be truck transport that in turn requires development of roads, or conveyor belt systems miles long. Then, there is the need for water intake structures including channels, pipes and pumping stations; the waste water discharge structures, the ash disposal areas and desalinisation facilities.

Together, just the construction of all these can cause serious disruptions of drainage patterns, and of ground and surface water systems. Added to this are the impacts of the operation of the power plant – the waste water and hot water discharges, ash disposal, coal dust and other effluents.

One of the most serious threats from coastal thermal power plants is created as they bring in vast quantities of sea water into freshwater and brackish water areas. Unfortunately, these impacts are neither properly assessed – through the environment impact assessments or other modes of assessment – nor are they properly mitigated or compensated. All these are hidden behind the notion that because coastal power plants use sea water, water is really not an issue.

An independent report released very recently (on 14 July 2014) for the first time provides a comprehensive picture of what the impacts of such coastal power plants are likely to be.  The report titled “Hydrological Implications of the 4000 MW coal-fired Ultra Mega Power Project in Cheyyur, Tamil  Nadu“, brought out by Community Environmental Monitoring (a program of The Other Media), with inputs from S. Janakarajan, Siddharth Hande & Nityanand Jayaraman, uses GIS to present a detailed map of all the numerous water bodies in the project area, and shows how the project will cause enormous impact.

This report shows that the waste water drain will cut existing drainage, and divert the monsoon water that normally reaches the Cheyyur / Odiyur lagoon away from it. This will badly affect the lagoon, a resting and feeding place for migratory birds and a biologically highly productive system that is crucial for local fisheries.

The report, through the map, highlights that the area has a rich system of eris – tanks that are built in a cascade with the overflow of one feeding the other. These tanks serve as source of irrigation for agriculture, for fisheries and meet many other needs.

The ash pond of the project is located at a higher elevation and the overflow (not to mention any accidental releases or breach) from the ash pond will follow the contours and run through several of these water bodies, contaminating them. It may be noted that the plant is likely to generate close to a million tons of ash per year, and that coal ash contains toxic heavy metals and possibly even radioactive material.

The report further points out that the coastal area has very old sand dunes, which house a rich ecosystem of a large variety of plants, including economically important ones like cashew. Moreover, these sand dunes provide protection that makes agriculture possible in large areas close to the coast. Part of the reason for the rich biodiversity of the sand dunes is their capacity to hold rainwater like a sponge and release it slowly for the needs of vegetation. The project will destroy several such sand dunes – some flattened to build project components like the coal yard, others cut through for the conveyer belt, and so on.

The report brings out the serious consequences on the entire water system of the area due to the Cheyyur power project, reaching the conclusion that the electricity from the power plant will come at the greatest of costs – water. It urges that while there are may be several other sources for electricity, there are no alternatives to preserving our water resources.

In fact, there is increasing evidence to show that water and water systems – and related livelihoods – could be one of the most important factors to consider for coastal coal-based thermal power plants, particularly where such development is taking place as large clusters. Given this, there is a need to re-assess all such plants from the perspective of impacts on water.

CHANGEMAKERS : A fuller picture of ourselves
MORE ARTICLES
on similar topics ...
ANDHRA PRADESH